Red imported fire ants, Solenopsis invicta, were accidentally imported into Mobile, AL about 1930. Since then, they have spread rapidly into most of the southeastern states and a few western states primarily through commerce. They are now in most of North Carolina except some of the northern tier counties. You should accept that you will never get rid of them, but you can manage them. This note will help the homeowner take control of his home lawn. Professional lawn care businesses are also an option and they have a few additional products available that are not sold in big box stores and garden centers.

Fire ants produce mounds that may continue to enlarge as the population grows. Young colonies may not have mounds. Mounds are located in sunny areas and often next to sidewalks, driveways or other heat absorbing masses.

Fire ants have two nodes or humps the the waist between the thorax and gaster.

Fire ants have two nodes or humps the the waist between the thorax and gaster.

The red imported fire ant is our most troublesome ant in North Carolina landscapes. They are typical reddish brown ants except between the thorax and gaster, fire ants have two humps whereas almost all other ants have only one hump and the gaster is darker than the rest of the ant. Fire ant colonies are have three forms: fertile females (queens) that lay all of the eggs, winged males, and infertile workers. Workers develop into three sizes: minim (about 1/8 inch), minor or media, and major workers (about ¼ inch). The queen lays and tends the initial egg cluster. After the initial brood has developed into workers, she continues to lay eggs as the workers take over care of all other functions of the colony including rearing their new siblings and defending the nest. A typical mature colony contains 100,000 to 500,000 workers with relatively few winged (reproductive) forms. Eventually the winged forms swarm out of the nest and participate in an aerial mating swarm. The males die shortly thereafter. Newly fertilized queens land, break off their wings, and excavate a cell in which eggs are laid to start a new colony. Some colonies have multiple queens. Such colonies may bud off new colonies nearby. These ants build mounds in any type of soil, but seem to prefer open, sunny areas such as lawns and pastures. The above ground part of the mound is only a small portion of the nest which may be three feet deep. In urban areas, fire ants invade lawns, parks, play grounds, school yards, cemeteries and golf courses. A noticeable mound from which, when disturbed, ants boil out aggressively is most likely that of the red imported fire ant.

The best seasons to treat fire ants are late spring and early fall (late September-early October) before the temperatures become too cool. However, if you have an active mound in an inconvenient location, you can mound drench on any warm day. The most effective management program will combine a two-step process combining direct mound treatment and baits. If you have too many mounds, baiting may be your best solution if you can be patient. It is better to use a bait first and follow up with mound treatment a few days later if you can't wait for a slower bait. You can test for activity with a potato chip. DO NOT use both mound drench and bait at the same time. You will waste your bait. You may also mound drench and follow with bait 5-7 days later if there is still activity or a satellite mound has sprung up. Some products are made for application across the entire lawn. An effective management program also requires monitoring several times per year. Fire ant control measures will not be successful if you think you can make one application of something and they will be gone forever.

Baiting may be done near specific mounds, or broadcast across a large area. Baits generally, should not be applied directly onto the mound. Ants do not forage on top of the mound. Fire ant entrances are located around the outside edges of a mound. Not all baits that can be used at a mound may also be used as a broadcast. Read the label. Baits are actually food and depend upon that food being attractive for the ants to take it in. Some baits are direct poisons and some are insect growth regulators which, instead, cause the colony to die out more gradually. Baits are slower acting than direct mound poisons so do not expect results overnight. Baits rely on foragers to collect the food and bring it back to the rest of the colony to eat. In mid-morning before baiting, drop one or two potato chips near a mound. If ants are consuming the potato chips at 20 minutes, it is a good time to apply bait.

Directly treating a mound is the fastest method for killing a specific mound. Even so, it is hard to kill every ant and more importantly the queen(s), with certainty. Mounds can be treated directly with insecticide. The insecticide could be powder or granules that are applied atop the mound and then watered into the soil, or they may be dry or liquid insecticides that are mixed with water and then drenched onto the mound. Read the directions carefully for the product you are using. If it is too cold or too hot, ants may not be near the top of the mound. Mid-morning is a good time when temperatures are not too hot nor too cool and mound ants are near the surface. Somewhere near 70°F would be good. 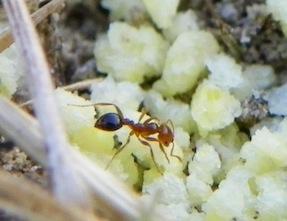