The twolined spittlebug, Prosapia bicincta, is an increasingly important pest of turf and ornamentals throughout North Carolina. Nymphs are most often associated with warm-season turfgrasses, but they can also do considerable damage to cool-season grasses. Adult two-lined spittlebugs feed on various ornamentals, especially hollies.

Adult twolined spittlebugs resemble robust, black leafhoppers with two red stripes across the back. The wings are held rooflike over the back in an inverted "V." Adults are about 1/3 inch long. The eyes are bright red. The abdomen is bright red and shows conspicuously when in flight.

Nymphs resemble the adults, but are smaller and lack wings. Nymphs are yellow, white or orange, but have red eyes and brown heads. The most unusual characteristic of this stage is the spittlemass. The white, frothy spittlemass envelopes the nymph and provides protection from desiccation and predators. 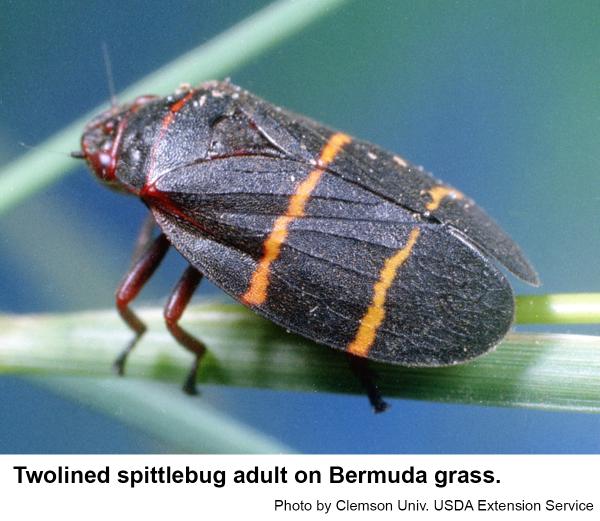 Twolined spittlebugs are often noticed in landscapes in mid to late summer.

Twolined spittlebugs are often noticed in landscapes in mid to late summer. 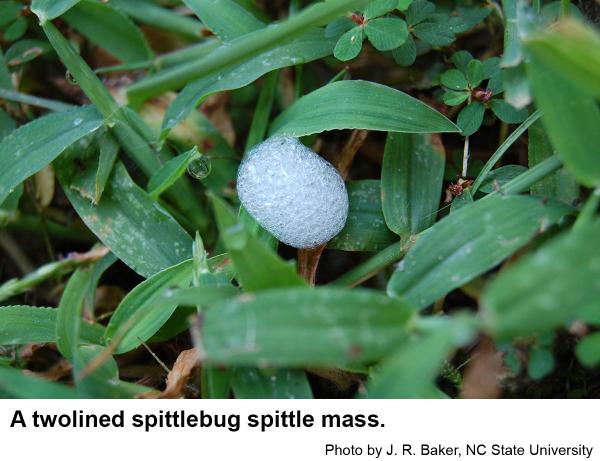 Twolined spittlebug spittle is usually close to the soil on turfgrasses.

Twolined spittlebug spittle is usually close to the soil on turfgrasses. 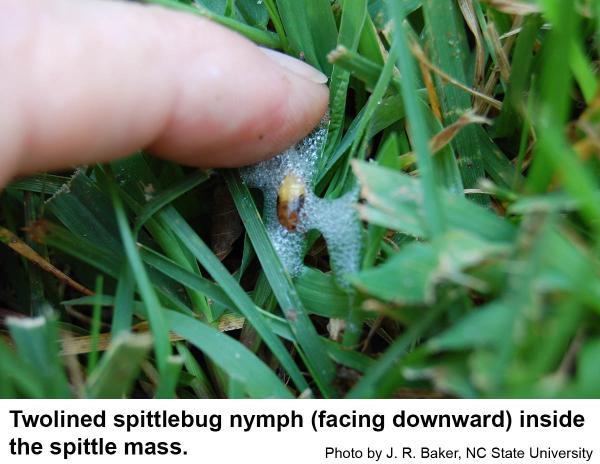 Twolined spittlebug nymphs are usually completely hidden by their spittle.

Twolined spittlebug nymphs are usually completely hidden by their spittle.

Eggs overwinter in grass stems, behind the leaf sheath, in plant debris and other protected areas. The nymphs hatch in the spring and begin feeding. They usually feed on lower parts of the grass plants where the humidity is high. On hot, sunny days, nymphs may penetrate even deeper into the turf.

The nymphs feed for about 1 month before they become adults. Approximately 2 months are required to complete the life cycle. Eggs require 2 weeks to hatch during the summer. Adults are 1 to 2 weeks old before they begin laying eggs. There are at least two generations per year.

Past literature stated that twolined spittlebug nymphs are rarely a problem on well-managed turf. However, recent reports from turfgrass managers, especially in the eastern half of North Carolina, have proven the two-lined spittlebug is a greater pest than previously thought. Spittlebug nymphs are particularly damaging because as they feed by sucking plant juices from the turfgrass, they must remove enough fluids to form the protective spittlemass. As a result, the total amount of feeding for such small insects is considerable.

The needlelike mouthparts do little damage, but the fluid removal leads to weakened, stressed grass that may turn yellow and then brown. Severe infestations can even kill the turfgrass. In addition to feeding damage, the spittlemasses themselves can become a nuisance and can give the turf an unsightly appearance. Heavy infestations of two-lined spittlebugs can produce so much spittle that the lawn actually squishes when walked upon.

On shrubs in late summer and early fall, adult two-lined spittlebugs fly to hollies (and other plants) to feed. Their feeding causes holly leaves to become splotchy and yellow and to drop prematurely. Laboratory assays in Georgia by S.K. Braman and J. Ruter confirmed the susceptibility of cultivars with Ilex cassine or I. opaca parentage. Severe damage was seen in 'Savannah,' 'Carolina #2,' 'Eagleston,' 'East Palatka,' 'Foster #2,' and 'W.J. Bean,' I. cassine (redfruit), I.cassine (yellow fruit), and I. integra xrugosa. Cultivars in the lab assay with no damage included 'Shamrock,' Winter Red,' 'Burford,' 'Wetumpka,' Warrens Red,' and 'Kathy Anne Batson'. 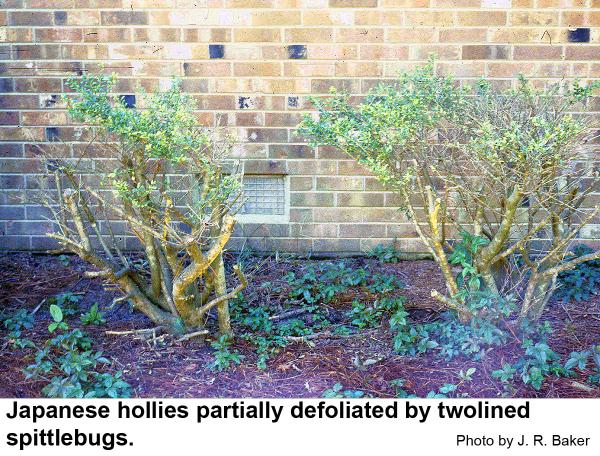 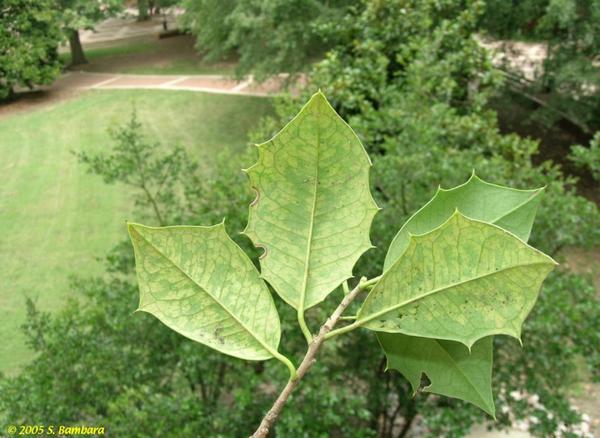 Spittlebug nymphs can best be controlled in the turfgrass. A conscious effort should be made to implement such practices prior to the first signs of severe damage. Nymphs are large enough to cause severe damage by mid May in some areas. Those locations where spittlebugs have been a past problem should be checked more closely. Turf resistance studies in Georgia by Shortman, Braman et al. showed that generally, damage was worst on centipedegrasses and least on zoyiagrasses. An abstract of the 56 turfgrass genotypes is available.

The only accurate way to assess the need to treat is to search through the turf down near the soil line and actually find the spittlebugs. This requires some time and effort. The turfgrass must be examined closely by parting the grass and looking for the spittlemasses that surround the nymphs. After control is obtained, the area should be periodically rechecked Reinfestation can occur quickly since the two-lined spittlebug has at least two generations per year in this state.

The best time to check for nymphs and to apply pesticides to turfgrasses is late in the day because the nymphs are higher on the plants than during the hot midday.

Numerous insecticides are labeled to control spittlebugs on turf and if properly applied, most perform well. Good coverage is essential. Granular formulations are not as effective as spray formulations. Be sure to read and follow all label directions.

Recommendations for insecticides approved for control of these insects in home lawns can be found in the home uses section of the insect control chapter of the North Carolina Agricultural Chemicals Manual.

Recommendations for insecticides approved for use on sod farms, golf courses or other commercial sites can be found in the commercial turf section of the insect control chapter of the North Carolina Agricultural Chemicals Manual.

Chemical insecticides approved for spittlebug control on trees and shrubs may contain compounds such as permethrin, bifenthrin, cyfluthrin, imidicloprid, carbaryl, acephate and others. Check the label of your tree and shrub insecticide products for any of these active ingredients.

Recommendations of specific chemicals are based upon information on the manufacturer's label and performance in a limited number of trials. Because environmental conditions and methods of application by growers may vary widely, performance of the chemical will not always conform to the safety and pest control standards indicated by experimental data.