In spring, maple leaves frequently develop growths or swellings known as galls. Several types of these are caused by tiny mites in the family Eriophyidae — mites that are too small to be seen without magnification. Maple galls are the result of an abnormal growth of the leaf tissue due to stimulation or "irritation" from the saliva these mites inject as they feed. The saliva acts as a plant growth regulator that causes individual cells to hypertrophy (get large) and even causes cell chromosomes to replicate without cell division. The mites have a reddish form that passes the winter in roughened areas on the bark or in scars, wounds or other protected places. In early spring, the mites migrate to the buds and attack the young leaves. Several generations of white forms of these mites develop during the summer, living and feeding inside the galls. Once the leaves are fully expanded, the mites can no longer induce gall formation. In early summer, they leave the galls and migrate to the bark to spend the winter as reddish mites.

Eriophyid mites tend to feed on specific host pantss. They do not spread from maple to apple or roses or even other species of maple.

Similar galls are common on boxelder, walnut and pecan as well as many other trees and shrubs are caused by other species of gall mites. The presence of the galls disfigures and deforms the foliage. Also, when galls are abundant, some leaves yellow and drop prematurely. In some cases, numerous galls have seemed to weaken branches or even whole trees. Ordinarily, however, mite galls cause very little real harm. Control efforts are really not warranted unless the galls become amazingly abundant. 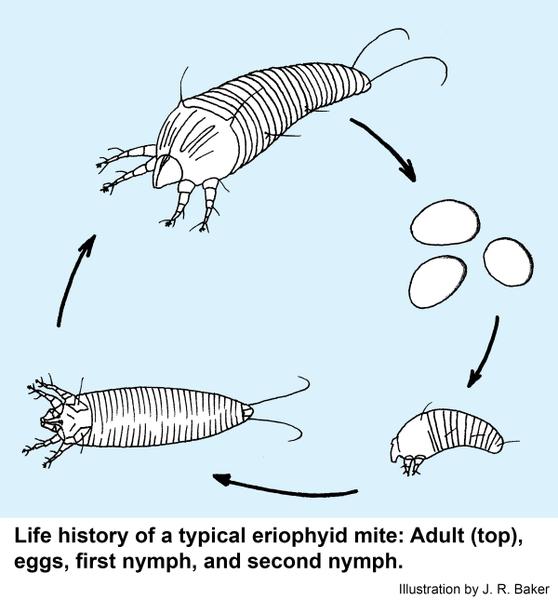 Eriophyid mites have only four legs all situated at the front.

Eriophyid mites have only four legs all situated at the front.

Maple bladder gall mites, Vasates quadripedes, cause more or less round swellings or galls on the upper surface of the leaves of silver maple. The galls are yellowish green at first but later become pinkish to red and finally black. There may be many galls on some trees or parts of trees and few on others. They may be very abundant one year and scarce the next. Silver maple is the primary host plant but red maple is also reported.

Inside the galls are distorted plant cells and tiny maple bladder gall mites and eggs.

Inside the galls are distorted plant cells and tiny maple bladder gall mites and eggs. 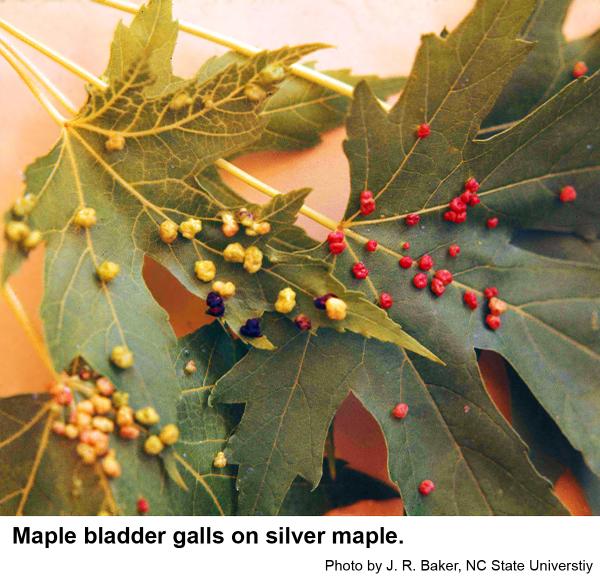 Maple bladder galls appear in spring as leaves are expanding.

Maple bladder galls appear in spring as leaves are expanding.

Maple spindle gall mites, Vasates aceriscrumena, cause small spindle-shaped galls on the upper surface of the leaves of silver maple, sugar maple and whitebark maple. These galls cause no serious injury to sugar maple, the only reported host plant. 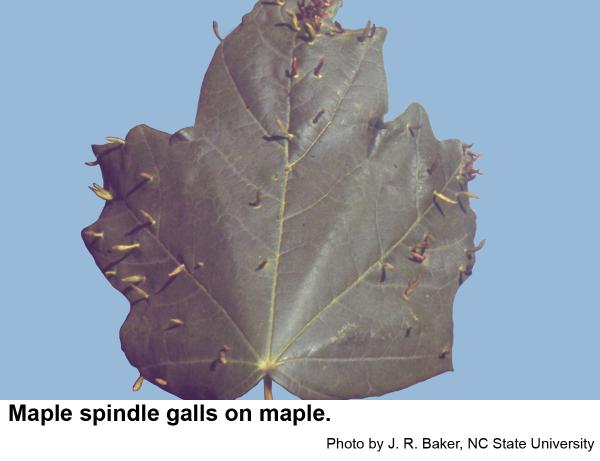 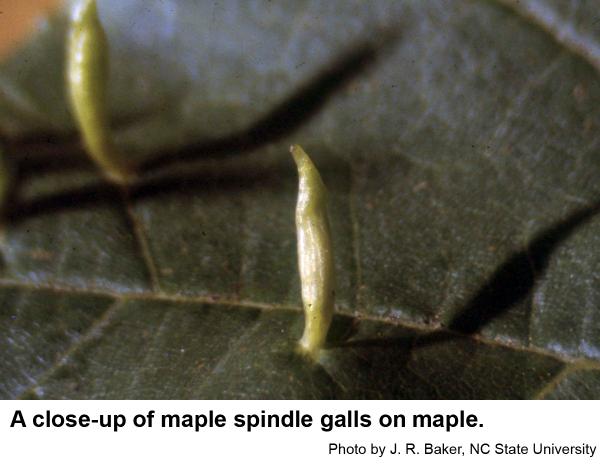 Maple spindle galls protrude through the top of the leaf.

Maple spindle galls protrude through the top of the leaf. 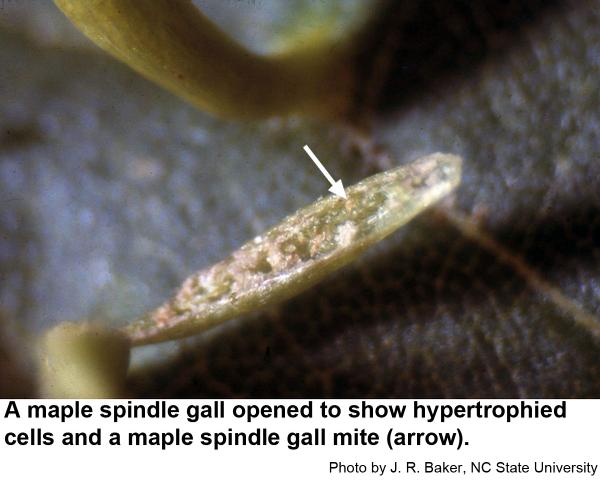 Crimson erineum mites, Aculops maculatus, cause glossy, crimson, felt-like patches composed of numerous galled cells on the surface of maple leaves. These galls cause no serious injury to the foliage of silver maple and sugar maple. 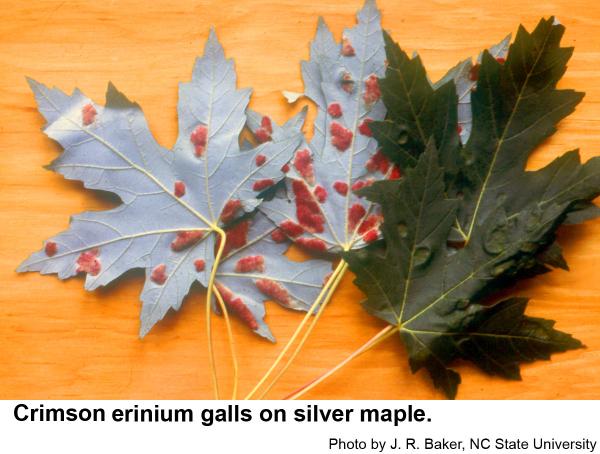 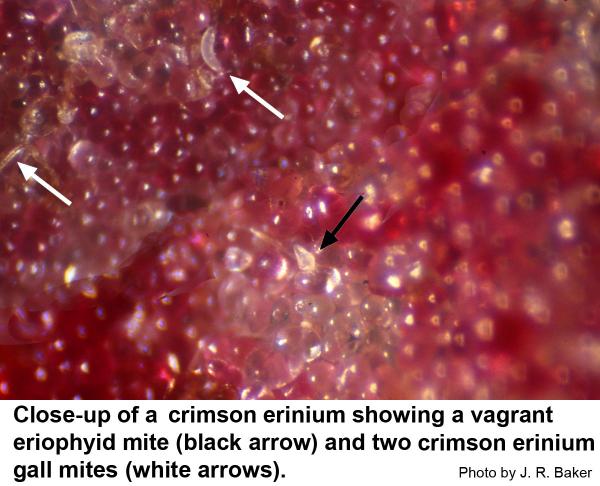 Because erineum galls are open, various kinds of mites can crawl in.

Because erineum galls are open, various kinds of mites can crawl in.

Galls on maples appear sporadically and do mostly cosmetic damage. The threat to the health of the tree is negligible or limited. Treatment is rarely justified. Because eriophyid gall mites crawl to the bark to spend the winter, trees could then be sprayed to suppress the mites there. By waiting until the leaves have fallen, it is easier to cover the bark thoroughly and much less pesticide will be needed. Following are some pesticides labeled for eriophyid mites or simply "mites" and may give some control if applied according to directions for safe use found on the label of the pesticide container. Some maples, such as some of the Norway maples, are much less susceptible to these mites. Once the galls have formed, however, an application of a miticide will not make the galls disappear.