Due to these limitations, when plants with visual symptoms of nutrient deficiency are found in a field, it is very important to perform soil and tissue testing to correctly identify the problem. Nematode assay may be important too. In this factsheet, we present the main symptoms of B deficiency in soybeans and the recommended management for North Carolina soils.

Management recommendations are based on experiments conducted at research stations and commercial farms in North Carolina and other regions. Producers wishing to conduct their own on-farm trials can use resources available through Cooperative Extension agents and the North Carolina Department of Agriculture & Consumer Services Regional Agronomists. They can also rely on precision technology to apply products and monitor crop yields. Such studies are most likely to provide useful information when they follow a few simple guidelines:

Boron deficiencies are not common in North Carolina. However, deficiencies can occur in coarse-textured soils with low organic matter. In these conditions, low rainfall can reduce B uptake, resulting in deficiency. Excessive rainfall also can result in B leaching due its high solubility and mobility in the soil. Excessively high pH (>6.5) in soils may reduce B availability, causing deficiency. If B is limited during reproductive stages, vegetative growth would appear normal, but pod and seed development could be impaired.

Boron-deficient plants may result in shortened internodes, yellowing or rendering of upper leaves, and deformed or dead terminal of growing points (Figure 1). 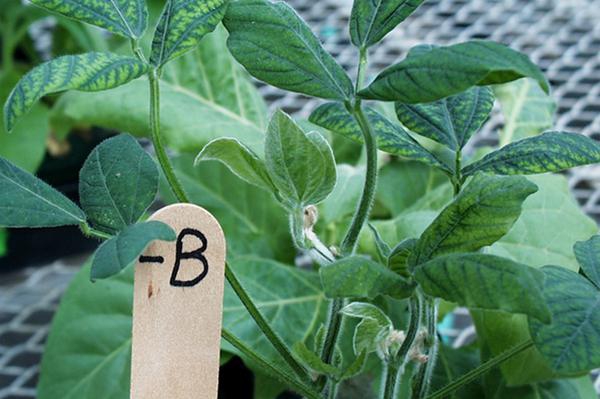 Soybean is less sensitive to B deficiency when compared to sensitive crops such as cotton or peanuts. Therefore, soybean is not routinely fertilized with B, as with cotton and peanuts, which receive B fertilization every cropping season. The visual deficiency diagnosis needs to be confirmed by diagnostic soil and plant analyses. Procedures for diagnostic sampling can be found at NC State Extension’s soil fertility webpage. When B deficiency is detected in a soybean field during the growing season, foliar feed is the best way to deliver B to plants. Soybean can be sensitive to B toxicity, so always follow the rates recommended on the fertilizer label.