Due to these limitations, when plants with visual symptoms of nutrient deficiency are found in a field, it is very important to perform soil and tissue testing to correctly identify the problem. Nematode assay may be important too. In this factsheet, we present the main symptoms of N deficiency in soybeans and the recommended management for North Carolina soils.

Management recommendations are based on experiments conducted at research stations and commercial farms in North Carolina and other regions. Producers wishing to conduct their own on-farm trials can use resources available through Cooperative Extension agents and the North Carolina Department of Agriculture & Consumer Services Regional Agronomists. They can also rely on precision technology to apply products and monitor crop yields. Such studies are most likely to provide useful information when they follow a few simple guidelines:

In the beginning of the crop cycle, low N availability can occur in water-saturated soils where rhizobium nodulation is reduced. In general, after the drainage of the excess water, effective nodulation will take place. Low pH or other adverse soil conditions impairing nodulation can also result in N deficiency. 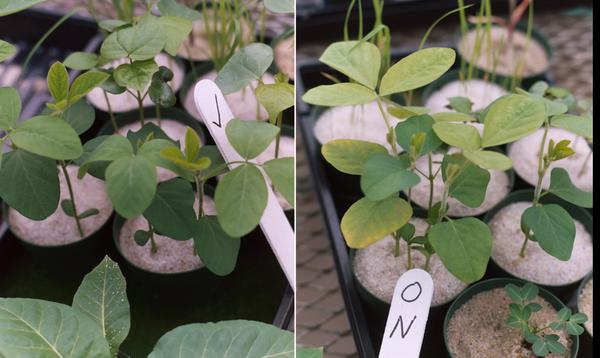 The visual deficiency diagnosis needs to be confirmed by diagnostic soil and plant analysis. Soil testing may reveal sufficiently low pH, which adversely affects nodulation. Procedures for diagnostic sampling can be found at NC State Extension’s soil fertility webpage. Due to biological fixation of N, there are no general recommendation for N fertilization of soybean in North Carolina. Repeated experiments in North Carolina generally fail to demonstrate profitable response to N fertilizer by soybean, so it is likely to be more effective to document the cause of the N deficiency and plan to reduce this problem occurrence in future soybean crops. It is important to test soil frequently, at least every other year, and keep the soil within the range of pH recommended for soybean.

If soybean has not been planted in the field in the last four to five years, consider using an inoculant at planting in the next soybean season to increase the population of N-fixing bacteria.