Due to these limitations, when plants with visual symptoms of nutrient deficiency are found in a field, it is very important to perform soil and tissue testing to correctly identify the problem. Nematode assay may be important too. In this factsheet, we present the main symptoms of S deficiency in soybeans and the recommended management for North Carolina soils.

Management recommendations are based on experiments conducted at research stations and commercial farms in North Carolina and other regions. Producers wishing to conduct their own on-farm trials can use resources available through Cooperative Extension agents and the North Carolina Department of Agriculture & Consumer Services (NCDA&CS) Regional Agronomists. They can also rely on precision technology to apply products and monitor crop yields. Such studies are most likely to provide useful information when they follow a few simple guidelines:

Sulfur deficiencies typically occur in deep, coarse-textured soils with low organic matter in which S leaches easily. Sulfate can leach through sandy surface soils but usually accumulates in clay subsoil where some plants may acquire it. Deficiencies may be observed when S levels are low in both the topsoil and subsoil. Heavy, extended rains during the growing season can leach S to lower profile depths, even beyond deeply rooted soybeans. Other conditions besides leaching can reduce crop rooting depth, including cold weather, excessive soil moisture, low soil pH, and soil compaction. Excessively wet, cold soils lower microbial activity, resulting in lower residue decomposition rates and thus increasing the potential for S concerns.

Sulfur deficiencies show up on younger leaves that are small and pale yellow-green when S is deficient (Figure 1). Stems are thin, hard, and elongated. 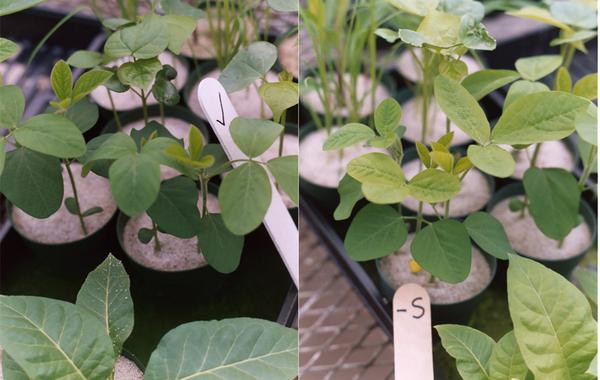 Sulfur may be recommended by soil testing to avoid potential deficiency. During the growing season, the visual deficiency diagnosis needs to be confirmed by diagnostic soil and plant analysis. With S, soil test levels are not as diagnostic as plant tissue testing. Procedures for diagnostic sampling can be found at NC State Extension’s soil fertility webpage. When S deficiency is detected in a soybean field during the growing season, S sprayed as foliar feed can help. Soil-applied fertilizer can also be broadcast on the field. If needed, consult your Cooperative Extension agent, NCDA&CS Regional Agronomist, crop consultant, or certified crop advisor (CCA) for help in rate and fertilizer selection.