Mulberryweed (Fatoua villosa) is an erect, branching, summer annual weed of landscapes and container nurseries that resembles a mulberry tree (Morus spp.) seedling. A native of eastern Asia, it was introduced into North America in the latter half of the 20th century. Due to its ability to reproduce and spread rapidly, it is now widely distributed in landscape plantings and container nurseries throughout the southeastern US. 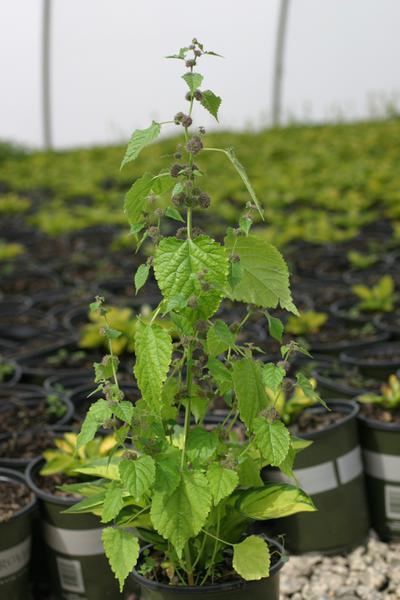 Skip to How to Identify Mulberryweed

As mentioned above, mulberryweed plants resemble young mulberry tree seedlings. Plants are erect with some branching; leaves are roughly triangular in shape with prominent veins and toothed margins. Petioles are about half as long as the leaf blade. Young stems are round and hairy; in contrast, stems of mulberry tree seedlings are not hairy. Lower portions of the stem may become dark maroon in color. Flowers are in feathery clusters, up to 3/4 inch in diameter, in the leaf axils. Flower clusters are purple when young, fading to dark brown with age. Individual flowers are inconspicuous, white to cream colored, and are not persistent.

The earliest known herbarium specimens in the US are dated 1964, yet reports suggest it was established in Louisiana before that time. Now mulberry weed is established in several locations in the southeastern US from Maryland to Florida and west to Texas and Oklahoma. It is typically found in moist, shady areas. In North Carolina it is almost exclusively a weed of container nurseries and landscape plantings. However, naturalized populations in moist woodlands have been reported

Skip to Reproduction and Spread

Plants reproduce by seed and are prolific seed producers. Flowering may be initiated when plants are quite young -- by the three-leaf stage of growth. Seed apparently require a short after-ripening time of less than 30 days before they will germinate. Seed are mostly dropped near the mother plant, but some seed are explosively dehiscent -- that is, they can be thrown up to four feet away. Long distance transport occurs in contaminated nursery stock. In the Mid-Atlantic States plants can have two to five generations per year. In a recent North Carolina nursery weed survey, mulberry weed was observed emerging from April through late November.

Skip to Management and Control

Control strategies should include exclusion, sanitation, mulches and herbicides. Because the weed will produce seed when only a few inches tall and spreads rapidly, preventing introduction and spread are crucial to long term management. Control or remove seedlings when they are young to prevent reproduction and spread. In nurseries, control the weed around propagation and liner areas with preemergence and postemergence herbicides. Liner stock should be inspected for mulberry weed seedlings; if found, remove the weeds and top ½ inch of substrate before potting. Mulberryweed seeds require light for germination; consequently in landscape plantings, a 2 to 3 inches deep layer of mulch will control mulberryweed. But, in shady moist areas or in areas where mulberryweed seeds are introduced to the surface of the mulch, mulberryweed will germinate and grow in mulches. Where mulches do not provide adequate control, mulberryweed is well controlled by several of the broad-spectrum preemergence herbicides commonly used in nurseries and landscape plantings, but due to continued germination throughout the growing season, there are often “escaped” weeds. Remove the “escaped” weeds when they are very young to prevent flowering, seed production and more mulberryweed.

Fatoua villosa is controlled by mulch.

Fatoua villosa is controlled by mulch.