Developers are required to use mulch on construction sites to help reduce erosion and to allow newly planted seed to become established. A protective mulch application that covers at least 85 percent of the soil surface helps prevent seeds from washing away, provides a better environment for germination, and slows runoff on slopes. Mulches used for ground cover vary in cost, application procedures, and appropriate conditions of use. Three basic classes of mulch include loose mulch, erosion control blankets (ECBs), and hydraulically applied mulches (hydromulches).

Straw is usually the least expensive of any mulch cover available. Large areas can be covered with straw using commercial blowers, which break up straw bales and blow the straw onto the soil (Figure 1). Applying straw by hand is also effective, but this method is more expensive due to labor costs, so it is usually limited to small areas. Straw mulch is typically applied at a rate of 1 to 2 tons per acre, but the actual application rate should be determined by visual inspection. The soil should be covered with little bare soil showing, but there shouldn’t be so much mulch that it smothers the seeds. Straw mulch is used on slopes of less than 2:1 to avoid failures. It lasts about three months, usually enough time to establish permanent, stabilizing vegetation.

Because straw is lightweight, it is easily blown away. Tackifiers or “crimping” help reduce this problem. Common tackifiers applied on the straw include:

Additional information on straw tackifiers can be found in AG-847, Replacing Asphalt: Recommendations for Straw Tackifiers.

Although applying tackifiers is the most common practice for preventing straw displacement, using heavy equipment or hand tools to “crimp” or “punch” straw into the soil may be sufficient when the soil is not too sandy. Ideally, some straw is partially buried during crimping, which holds it in place and may increase infiltration rates.

Straw has several causes of failure in controlling erosion, including insufficient coverage during application, use on slopes that are excessively steep or long, or insufficient application of the tackifier. However, when properly applied on acceptable slopes, straw can be an inexpensive and effective mulch for erosion control and vegetation establishment.

Other loose materials used for ground covers include compost and wood chips. Compost is made from a wide variety of organic materials, including animal manure, crop residue, municipal waste, biosolids, and yard waste. As a result, it can be highly variable in its properties. Compost is generally applied as a 1- to 2-inch layer on top of prepared soil where seed, fertilizer, and lime have previously been applied. On steep slopes (2:1 or steeper), up to 4 inches of compost may be needed. Some professional compost applicators include seed in the compost, which is recommended if more than 2 inches of compost is applied. Studies have shown that compost can be an appropriate ground cover for establishing grass on low to moderate slopes, but compost is generally more expensive than other erosion control options.

Wood chips or shredded woody materials are often generated during the clearing stage of construction when trees are shredded using large tub grinders. Such materials are ideal for landscaping around established vegetation or large plants, but they should be applied only where no permanent vegetation is planned. Typical ground covers such as grass have difficulty growing through woody material unless it is applied relatively thinly. Woody material should not be incorporated into the soil where vegetation is being established, because the process of decomposing in the soil will pull nutrients away from plant roots.

Erosion control blankets (ECBs) vary widely in composition, price, and circumstances of appropriate use. Common materials in ECBs are straw, excelsior (curled wood fibers, Figure 2), and coir (coconut shell fibers) held together by netting on one side or both. Some blankets have no netting and are held together by the fibers interlocking or by an adhesive. Coir blankets are woven from coir threads into a netting that comes in various thread densities as measured by their weight per unit area. ECBs come in rolls of various widths and lengths depending on the applications.

Selecting an appropriate ECB will depend on the slope, duration of use, cost, and effectiveness compared to other options. Table 1 summarizes the main types of ECBs, according to the Erosion Control Technology Council, an industry organization. Shear stress, or the amount of force water would have if running across the blanket, is the most common property used to select an ECB. On slopes, shear stress should be minimal as water should not be running down the slope other than the rain that falls on it. Most ECBs are temporary and designed to prevent erosion while vegetation gets established. However, some ECBs are designed to be permanent (5A, 5B) and can be installed to protect very steep slopes or can be placed in permanent channels as an alternative to rock.

Despite the variety of ECBs, the general method of installation is similar. The first step is proper slope preparation, including application of lime, fertilizer, and seed. The soil surface should be uniformly graded and free of rocks, large roots, or other materials that could prevent good soil-blanket contact. After slope preparation, begin installation by “trenching in” the top edge of a roll before unrolling downslope. The end of the mat is placed in a trench 6 inches deep, staked into the ground, buried with soil, and rolled over itself down-slope (Figure 3).

When laying out the ECB after trenching, overlap adjacent rolls by 3 inches on the sides and 18 inches down the slope. Secure the roll to the ground using sod staples. According to the Erosion Control Technology Council, the optimum staple density is 1.5 staples per square yard. Staples are generally put a foot apart across the top and every 3 feet along the sides on both overlapping and nonoverlapping portions. Staples should also be installed across the roll in a diamond or square pattern.

When installing ECBs, ensure that there is good contact with the soil surface to reduce soil bridging and washouts under the ECB. Correct installation—making sure the blanket is flush with the soil surface—is important both for long-term erosion control and vegetation establishment.

Like ECBs, there are many types of hydromulches available for erosion control. The selection of a hydromulch for a particular purpose depends on the slope and soil type where the mulch is being applied, the price of mulch application, and the effectiveness of a particular mulch type under a unique set of circumstances. The wide variety of hydromulches allows the applicator to select the optimum mulch for a job, although the number of choices can also make it difficult to select the best mulch. Table 2 lists general guidelines for selecting the right hydromulch, with increased cost following the increasing longevity. Longer-lasting materials tend to be more engineered and contain various additives to improve performance.

Unlike straw and ECBs, hydromulching requires specialized equipment, including a water tank with a mixer and a high-powered pump to apply the mixture to a slope. A water source near the site where the mulch is being applied is also needed. A pond or large stream may be suitable for tank filling, or a permit can be obtained to fill the tank from fire hydrants. The amount of water needed is based on the manufacturer’s recommended amount of material in the tank and the recommended application rate. A sample calculation is shown below, as well as a table of water needs for different combinations (Table 3).

Amount of hydromulch to mix in tank: 40 pounds per 100 gallons of water

Unlike erosion control blankets, hydromulch can be applied without being on the slope, making it suitable for large slopes (Figure 4). In addition, hydromulch does not contain netting that could entangle wildlife and mowers. There are a number of products that can be added to hydromulches to improve coverage or reduce erosion further. Consult the manufacturer’s guidelines before adding other products.

Lime, seed, and fertilizer are sometimes mixed with the mulch, but avoid doing this if possible. Lime and fertilizer can harm the seed when left in the tank for too long and are actually much more effective when incorporated into the soil prior to seeding and mulching. Seed applied with the mulch may land on the mulch surface, where it is unlikely to survive. Hydromulch is best applied after liming, fertilization, and seeding.

When applying hydromulch, follow the manufacturer’s directions for the rate and method of application. The rate of hydromulch application depends on the slope where it is being applied (Table 2). Mulch can be applied at a known rate by calibrating the spray hose, but many applicators prefer to apply the mulch by “eyeballing it” until coverage is sufficient. Regardless of the application method, the mulch should be applied from both the top and bottom of a slope to ensure uniform coverage.

The cost of hydromulching varies with the type of mulch selected, the application equipment, water availability, and area size. The least expensive products are paper based, termed cellulose in industry language, while the most expensive are composed of wood fiber with various additives. Cellulose-wood fiber blends fall in between. As a general rule, as slopes and lengths increase, the hydromulch rate will increase, and higher cost, more engineered products with greater longevity will be needed. 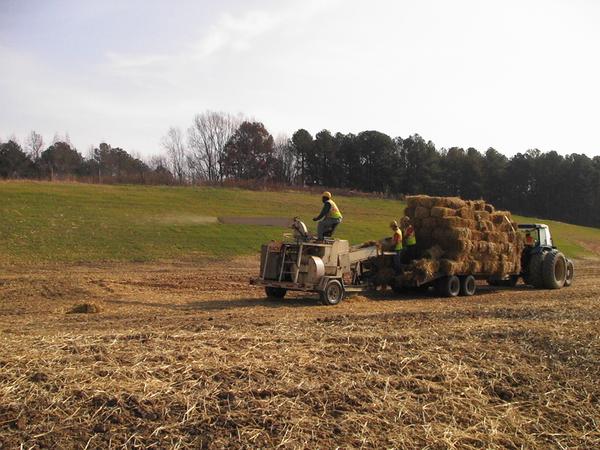 Figure 1. A crew applies straw with a blower pulled by a straw supply truck.

Figure 1. A crew applies straw with a blower pulled by a straw supply truck. 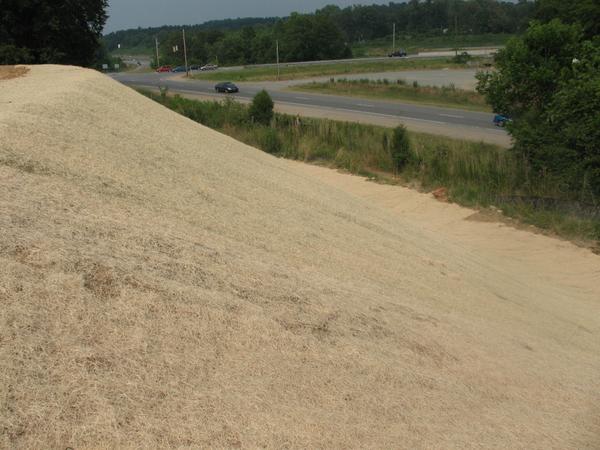 Figure 2. Excelsior erosion control blankets were installed on this 2:1 slope.

Figure 2. Excelsior erosion control blankets were installed on this 2:1 slope.

Figure 3. This diagram shows how to trench in an ECB to avoid undercutting near the top of a slope. The example is of a single-net, rolled erosion control product (RECP) with the net on top. Adapted from the Erosion Control Technology Council (2019).

Figure 3. This diagram shows how to trench in an ECB to avoid undercutting near the top of a slope. The example is of a single-net, rolled erosion control product (RECP) with the net on top. Adapted from the Erosion Control Technology Council (2019). 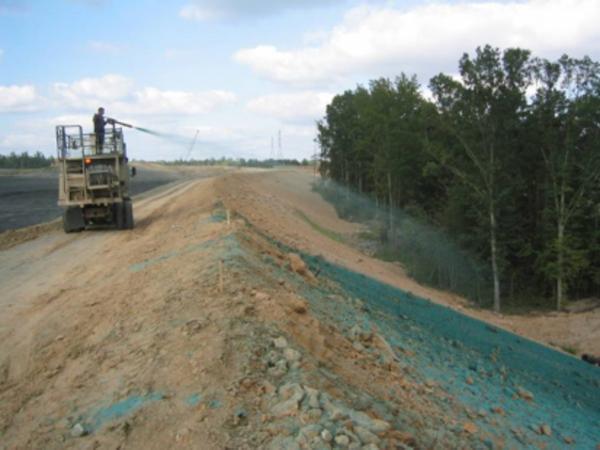 Figure 4. An operator applies hydromulch to a large slope. Note the berm at the top of the slope to prevent water from the upper areas from flowing onto the slope.

Figure 4. An operator applies hydromulch to a large slope. Note the berm at the top of the slope to prevent water from the upper areas from flowing onto the slope.

Regardless of the type of erosion control measure used, the long-term efficacy of the ground cover depends on proper slope preparation and correct installation. Considerations for proper slope preparation include filling any existing rills or gullies and applying the appropriate amounts of lime, fertilizer, and the correct seed mixture. Seeding blends and guidelines depend on the geographic location, slope, soil condition, and time of planting. For North Carolina, here are two good resources for finding this information—the North Carolina Erosion and Sediment Control Planning and Design Manual and the North Carolina Department of Transportation website.