Caution: This information was developed for North Carolina and may not apply to other states.

The multicolored Asian lady beetle is a native of Asia. It was released by the US Department of Agriculture in the Southeast and in Washington state, but could not be found for several years. Later, it was reportedly reintroduced accidentally from a freighter in the port of New Orleans. The beetles were first reported in North Carolina in 1992.

Multicolored Asian lady beetles are about 1⁄4 inch long. Females are slightly larger than males and specimens from higher elevations are larger than those from the Piedmont and Coastal Plains. These lady beetles vary greatly in appearance (Figure 1, Figure 2). Some have yellowish or orange forewings. Some have beige forewings and some are bright reddish orange.

There are usually ten black spots on each forewing, but some have fewer spots or faded spots and some have no spots at all. Specimens from the mountains tend to be heavily spotted whereas specimens from lower elevations tend to have either ten spots or no spots. However all gradations can be found at any location. 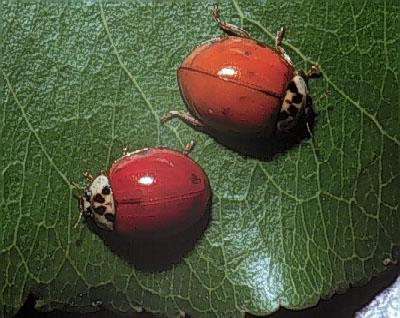 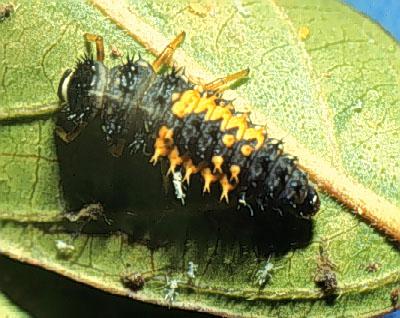 During the spring and summer, these lady beetles feed on aphids in field crops, gardens, meadows and trees. Multicolored Asian lady beetles are effective predators of aphids and some scale insects and are extremely beneficial for both agricultural and horticultural crops.

As temperatures start to cool in the fall , the adult lady beetles begin their search for protected places in which they can pass the winter. The beetles use visual or physical cues to find suitable overwintering sites. These locations tend to be the sunnier or warmer sides of buildings, or on exposed, light-colored buildings. Of course, this doesn't mean that people with dark-colored siding, brick or log homes are immune to the lady beetle assault. Recent research suggests that, once the beetles arrive at the site, they use chemical cues to locate the specific crevice they want to inhabit within the structure. The sources of these chemical cues have not been clearly identified, but may be beetle feces from the previous winter, the odor of beetles that died at the site, or an attractant pheromone. These factors may help to explain why beetles seem to pick the same sites (not necessarily every year, but perhaps more frequently than they pick nearby areas).

From the exterior of the house, they may move indoors by crawling under defective weather stripping or by crawling and flying in open doors on warm days. The beetles can fit through very small gaps or cracks in siding, masonry, around window and door casings, and even through attic and soffit vents. The beetles hibernate as adults, usually in wall voids (they cannot survive long in the heated rooms of a house). On warm days, they may become active and move towards light or bright surfaces. The beetles are often found on windows, light fixtures and ceilings. The multicolored Asian lady beetle does not reproduce indoors. In spring, they will move outdoors in search of prey.

Fortunately, multicolored Asian lady beetles are primarily a nuisance only. If squashed, however, the beetles may stain fabric and painted surfaces. They do not eat wood or furniture. Some people have reported receiving a mild "nip" by beetles that have landed on them. There have been concerns that large numbers of beetles may possibly cause air quality problems indoors that could trigger allergies and/or asthmatic reactions.

Spraying. Pesticides have limited effectiveness in stopping the beetle invasion. Repeatedly spraying the entire interior or exterior areas of a house isn't practical, economical or (most importantly) safe for humans and pets. Although foggers ("flea bombs") set off in the attic may kill many beetles, they do not affect beetles that may be under insulation or inside walls. Also, many people use more foggers than are appropriate for the size area to be treated and this may pose potential health and fire hazards. If you feel that you need to use pesticides to slow the beetles' invasion of your home, you can use one of the products listed in the North Carolina Agricultural Chemicals Manual for control of boxelder bugs.

Exclusion. While it is not 100% effective, preventing the beetles from entering the home is currently one of the best long-term approaches to dealing with the lady beetles.

Vacuuming. If you decide to vacuum up the beetles, empty the vacuum bag relatively soon afterwards. Dr. Susan Jones at Ohio State University has found an easier way to collect vacuumed beetles by inserting a woman's knee-high stocking into the vacuum's extension hose and then securing it with a rubber band before putting the attachment back on. This allows you to trap the beetles inside the stocking, which then conveniently closes up at the end with the rubber band when you remove it. You can also simply tie a knot in the end of the stocking. You can transfer the beetles to a container and keep them in a refrigerator over the winter (many will die there) or place them outdoors under a porch or in some other protected area and then release them into gardens next spring. An alternative is to toss your beetle-filled stocking into the garbage or dump the beetles into a container, freeze them, and then discard them.

Blacklight traps. Blacklight traps work well for catching beetles in some situations such as commercial facilities, such as hospitals and some manufacturing plants, where biocontamination is a critical issue. These facilities often use the more expensive industrial style light traps (not the traditional "bug zapper" type of trap). USDA scientists in Georgia developed a trap that uses no insecticide and it catches the beetles alive for future release or disposal. The trap is about 12 inches x 24 inches and reportedly can be easily assembled or disassembled in as little as two minutes. Visit Trapping System for Flying Insects to access the details for building your own blacklight trap. Or shop for a commercial one. Some people use light traps inside their homes but these have not produced satisfactory results in many instances.

Biological Control. There is a native tachinid fly species, Strongygaster triangulifera, that attacks the lady beetles. These flies lay their eggs on the beetles, and the newly-hatched maggot bores in and gradually destroys the lady beetle. Surveys by the NCDA&CS Biological Control Services found that as many as 31% of overwintering multicolored Asian lady beetles in area were parasitized by fly maggots. However, the average parasitism is closer to 2-4% of the beetles collected and fluctuations in the beetle populations can impacto the parasite as well.

[Note: Our thanks to Christine Nalepa, Kathy Kidd and Kenneth Ahlstrom of the NCDA&CS Biological Control Services for providing specific information about the multicolored Asian lady beetle and parasitism in North Carolina.]