Streams and rivers are integral parts of the landscape that carry water and sediment from high elevations to downstream lakes, estuaries, and oceans. The land area draining to a stream or river is defined as its watershed. When rain falls in a watershed, it either runs off the land surface, infiltrates into the soil, or evaporates (Figure 1). As surface runoff moves downslope, it concentrates in low areas and forms small stream channels. These are referred to as ephemeral channels that only carry water during rainfall runoff. Downstream from ephemeral channels are intermittent streams, which carry water during wet times of the year. These streams are partially supplied by groundwater rising to the surface as stream baseflow. They dry up when groundwater levels drop. Further downstream where baseflow is large enough to sustain stream flow throughout the year, perennial streams are formed. The size and flow of a stream are directly related to its watershed area. Other factors which affect channel size and stream flow are land use, soil types, topography, and climate. The morphology, or size and shape, of the channel reflect all of these factors.

While streams and rivers vary greatly in size, shape, slope, and bed materials, all streams share common characteristics. Streams have left and right streambanks (looking downstream) and streambeds consisting of mixtures of bedrock, boulders, cobble, gravel, sand, or silt/clay. Other physical characteristics shared by some stream types include pools, riffles, steps, point bars, meanders, floodplains, and terraces. All of these characteristics are related to the interactions among climate, geology, topography, vegetation and land use of the watershed. (Each of these characteristics will be defined in this fact sheet.) The study of these interactions and the resulting streams and rivers is called fluvial geomorphology.

In addition to transporting water and sediment, natural streams also provide the habitat for many aquatic organisms including fish, amphibians, insects, mollusks, and plants. Trees and shrubs along the banks provide a food source and regulate water temperatures. Channel features like pools, riffles, steps, and undercut banks provide diversity of habitat, oxygenation, and cover. For these reasons natural resource managers increasingly use natural channel designs to restore impaired streams. 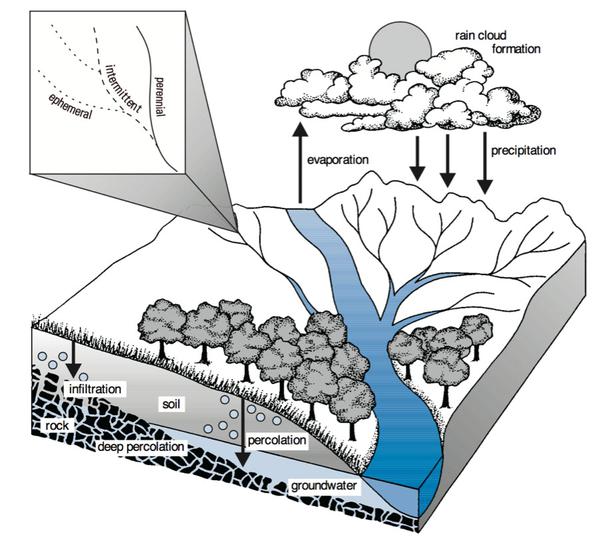 Skip to Bankfull Stage and Discharge

The most important stream process in defining channel form is the bankfull discharge, which is sometimes referred to as the effective discharge, or dominant discharge. Bankfull discharge is the flow that transports the majority of a stream’s sediment load over time and thereby forms the channel. The bankfull stage, during bankfull flow is the point at which flooding occurs on the floodplain. This may or may not be the top of the stream- bank. If the stream has downcut due to changes in the watershed or streamside vegetation, the floodplain stage may be a small bench or scour line on the streambank (Figure 2a). In this case, the top of the bank, which was formerly the floodplain, is called a terrace. A stream with terraces close to the top of the banks is an incised, or entrenched stream. If the stream is not entrenched, then bankfull is near the top of the bank (Figure 2b). On average, bankfull discharge occurs approximately every 1.5 years. In other words, each year there is about a 67 percent chance of having a bankfull streamflow event. The Rosgen stream classification system uses bankfull stage as the basis for measuring the width/depth ratio and entrenchment ratio, two of the most important delineative criteria. Therefore, it is critical to correctly identify bankfull stage when classifying streams and designing stream restoration measures. The Rosgen stream classification is discussed in detail in AG-590-1, Application of the Rosgen Stream Classification in North Carolina.

Figure 2b. Photograph of a stream showing bankfull as the top of the bank.

Figure 2b. Photograph of a stream showing bankfull as the top of the bank.

A naturally stable stream channel maintains its dimension, pattern, and profile over time so that the stream does not degrade or aggrade. Stable streams migrate across the landscape slowly over long periods of time while maintaining their form and function. Naturally stable streams must be able to transport the sediment load supplied by the watershed. Instability occurs when scouring causes the channel to incise (degrade) or excessive deposition causes the channel bed to rise (aggrade). A generalized relationship of stream stability is shown as a schematic drawing in Figure 3. The drawing shows that the product of sediment load and sediment size is proportional to the product of stream slope and discharge or stream power. A change in any one of these variables causes a rapid physical adjustment in the stream channel.

The dimension of a stream is its cross-sectional area (width multiplied by mean depth). The width of a stream generally increases in the downstream direction in proportion to the square root of discharge. Stream width is a function of discharge (occurrence and magnitude), sediment transport (size and type), and the stream bed and bank materials. North Carolina has a humid subtropical climate with an abundance of vegetation and rainfall throughout the year. Vegetation along the streambanks provides resistance to erosion so our streams are often narrower than streams in more arid regions. The mean depth of a stream varies greatly from reach to reach depending on channel slope and riffle/pool or step/pool spacing.

Stream pattern describes the “plan view” of a channel as seen from above. Streams are rarely straight. They tend to follow a sinuous path across a floodplain. The sinuosity of a stream is defined as the channel length following the deepest point in the channel (the thalweg) divided by the valley length. A meander increases resistance and reduces channel gradient relative to a straight reach. The meander geometry and spacing of riffles and pools adjust so that the stream per- forms minimal work. Stream pattern is qualitatively described as straight, meandering, or braided. Braided channels are less sinuous than meandering streams and possess three or more channels. Quantitatively, stream pattern can be defined through the following measurements shown in Figure 4: meander wavelength, radius of curvature, amplitude, and belt width.

The profile of a stream refers to its longitudinal slope. At the watershed scale, channel slope generally decreases in the downstream direction. The size of the bed material also decreases in the downstream direction. Channel slope is inversely related to sinuosity. This means that steep streams have low sinuosities and flat streams have high sinuosities. The profile of the streambed can be irregular because of variations in bed material size and shape, riffle/pool spacing, and other variables. The water surface profile mimics the bed profile at low flows. As water rises in a channel during storms, the water surface profile becomes more uniform as illustrated in Figure 5a. 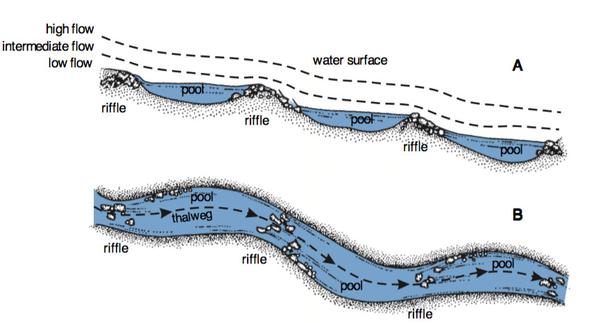 Figure 5. Bed and water surface slope at baseflow and stormflow (a); riffle/pool sequence (b).

Figure 5. Bed and water surface slope at baseflow and stormflow (a); riffle/pool sequence (b).

Natural streams have sequences of riffles and pools or steps and pools that maintain channel slope and stability. These features are shown in Figure 5b. The riffle is a bed feature with gravel or larger size particles. The water depth is relatively shallow and the slope is steeper than the average slope of the channel. At low flows, water moves faster over riffles, which provides oxygen to the stream. Riffles are found entering and exiting meanders and control the streambed elevation. Pools are located on the outside bends of meanders between riffles. The pool has a flat slope and is much deeper than the average depth. At low flows, pools are depositional features and riffles are scour features. At high flows, however, the pool scours and bed material deposits on the riffle. This occurs because a force, called shear stress, applied to the streambed increases with depth and slope. Slope and depth increase rapidly over the pools during large storms, increasing shear stress and causing scour. The inside of the meander bend is a depositional feature called a point bar, which also helps maintain channel form.

Step/pool sequences are found in high gradient streams. Steps are vertical drops often formed by large boulders, bedrock knickpoints, downed trees, etc. Deep pools are found at the bottom of each step. The step provides grade control and the pool dissipates energy. The spacing of step pools gets closer as the channel slope increases.

A stream and its floodplain comprise a dynamic environment where the floodplain, channel, and bedforms evolve through natural processes that erode, transport, sort, and deposit alluvial materials. The result is a dynamic equilibrium, where the stream maintains its dimension pattern and profile over time, neither degrading nor aggrading. Land use changes in the watershed and channelization can upset this balance. A new equilibrium may eventually result, but not before large adjustments in channel form, such as extreme bank erosion or incision. By understanding and applying natural stream processes to stream restoration projects, a self- sustaining stream can be designed and implemented that maximizes stream and biological potential.