Nitrogen (N) is the most important nutrient for ensuring a healthy tobacco crop that produces high quality leaf. Accordingly, the majority of this research focuses on organic N source materials. North Carolina soils tend to have sufficient levels of legacy phosphorus and potassium for flue-cured tobacco; however, producers must frequently test soils for essential nutrient concentrations and follow the technical recommendations to keep all the essential nutrients at adequate levels for tobacco.

Unlike greenhouse production, in which near constant applications of N are preferred, field application must be timely to limit soil N availability and uptake eight to ten weeks after transplant. Nitrogen application rates range from 50 to 80 lb N/A depending on physical and chemical properties of soil. NC State Extension’s Tobacco Growers Information website provides reference information about nutrient fertility in tobacco. Underapplying N can lead to poor growth and leaf development, reducing yields and leaf quality. Conversely, overapplication of N can lead to delayed leaf ripening and reduction in cured leaf quality.

Given that organic N sources of commercial fertilizer are often very low in mineral N at the time of application and that soil moisture can be limiting during certain portions of the growing season, using N sources in the production of organic tobacco must be careful considered. One organic N source that offers great promise is hydrolyzed poultry feather meal (PFM). Hydrolyzed PFM, a byproduct of the livestock processing industry, has a relatively high N content, at about 15%. As this product is highly processed, PFM might be a quick release N source that will release the majority of its N during peak N uptake and have limited late season availability.

To evaluate PFM, research was recently conducted at two experimental sites in Kinston and Oxford to quantify the effects of two PFM sources, Nature Safe® 13-0-0 (Figure 1A) and NutriMax® 12-1-0 (Figure 1B), on the yield, quality, and chemical constituents of flue-cured tobacco. It was applied at three rates: (1) 15 lb N below base recommendation (-B), (2) at base recommendation (B), and (3) at 15 lb above base recommendation (+B). Base application rates were 70 and 75 lb N/A, respectively. All N was broadcast-applied prior to transplanting and incorporated with a disc.

Results from this study indicate that both Nature Safe® and Nutrimax® fertilizer sources are acceptable for the production of flue-cured tobacco in organic systems (Table 1). Both sources appear to fit the needs of high-N materials, with rapid early season N release and a sharp decline later in the season after topping. The lack of problematic late season greening likely indicates that N release from both sources occurred in the early portion of each growing season.

Application rates of either organic N source should be based on North Carolina Cooperative Extension recommendations, which are specific to individual growing environments. While we did not observe delayed N mineralization and assimilation in the two years of our study, we remain concerned about this issue under adverse growing conditions (for example, dry growing conditions). These concerns are amplified where application rates are excessive and precipitation is below average or occurs at irregular intervals throughout the growing season. Conversely, producers should not reduce N application rates to hedge against greening related issues. Generally, the lower N application rates evaluated in this study lowered total alkaloid (nicotine) concentration and increased the reducing sugar concentration (Table 1). While this factor did not have great agronomic significance, it could have much larger implications to smoke flavor and aroma, which are two factors not evaluated in this study. 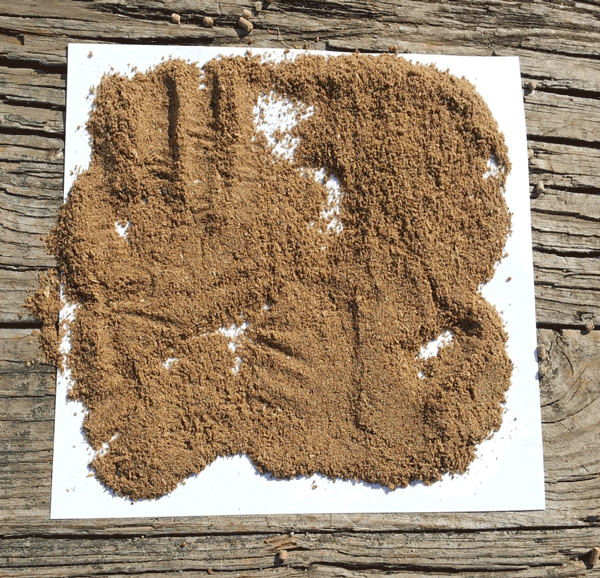 Additional studies have also been conducted to determine the most appropriate application timings for organic N sources. In these studies, two organic N sources (70 lb N/A of Nature Safe® 13-0-0 and NutriMax® 12-1-0) were applied 100% broadcast (BC) and incorporated prior to transplanting, 50% BC prior to transplanting plus 50% side-dress (SD) 10 days after transplanting (BC/SD), or 100% SD 10 days after transplanting (Table 2). Performance of Nature Safe® and Nutrimax® were similar. In addition, each of the three application methods produced similar results in 2012, which was a growing season characterized by relatively normal environmental conditions. Alternatively, in 2013, the 100% SD application program generally increased leaf N concentration and cured leaf yield. The 2013 growing season was marked with excessive, season-long precipitation. The delay of N application 10 days after transplanting may have reduced the potential for leaching. In addition, the placement of N in such close proximity to the rooting zone would have increased fertilizer use efficiency, thus overcoming leaching due to severe rainfall to some degree. Cured leaf quality was not influenced by nutrient application. Ultimately, each of the three application methods are likely acceptable for tobacco production, as rainfall patterns are unpredictable at the onset of any growing season. Producers are encouraged to consider each application program based upon equipment capabilities and material availability. Regardless, producers are discouraged from making organic N applications at layby or later in the season.

An increasing variety of certified organic N fertilizers have entered the market. Field studies in 2018 and 2019 were conducted at the Upper Coastal Plain Research Station in Rocky Mount and the Oxford Tobacco Research Station in Oxford to evaluate seven organic fertilizers (Table 3). All N source materials were SD-applied at a rate of 70 lb N/A 10 days after transplant. Supplemental phosphorus, potassium, and other micronutrients were applied so that each N source provided the same amount of nutrients; this allowed for comparison of the N in the organic fertilizer.

Yields were highest in those treatments receiving sodium nitrate and soy protein (Table 4). While PFM is the most commonly used organic N source among organic producers, yield from this treatment was among the lowest in our study. Quality did not differ among the treatments nor did SPAD readings (a measure of leaf greenness) taken at layby. Leaf tissue nitrate concentrations at layby and topping followed similar trends observed in yield and total alkaloids: Both nitrate and total alkaloids were highest in sodium nitrate, soy protein, and blood meal concentrations, and lowest in chicken litter and PFM treatments. Reducing sugars showed the opposite trend as nitrate and total alkaloids; the chicken litter treatment led to the highest reducing sugars, and the lowest concentration was observed when using sodium nitrate. Commercial organic tobacco producers should note that some of the N fertilizer sources evaluated in our study are not approved for application by tobacco buyers. Producers should verify that the use of a fertilizer source is acceptable by organic certifiers and leaf buyers prior to purchasing and applying the material.

Use of Cover Crops as an Alternative Nitrogen Source

Skip to Use of Cover Crops as an Alternative Nitrogen Source

Winter leguminous cover crops are a common N fertilizer alternative in organic cropping systems. These crops have the ability to fix significant amounts of N while also providing numerous agro-ecological services such as erosion control, weed management, and pollinator and beneficial insect habitat creation. Studies were conducted in Kinston and Rocky Mount during the 2018 and 2019 growing seasons to investigate the use of winter leguminous cover crops as an N source for flue-cured tobacco. Austrian winter pea (AWP) (Figure 2A), hairy vetch (HV) (Figure 2B), and crimson clover (CC) (Figure 2C) were seeded at rates of 90 lb/A, 10 lb/A, and 20 lb/A, respectively.

Cover crop treatments also received three different supplemental N applications of 0, 35, or 75 lb N/A, representing 0%, 50%, and 100% of the recommend N application rate, respectively. Supplemental N was applied at transplant in the form of pelletized feather meal (Nature Safe® 13-0-0). A bare ground treatment (no cover crop) receiving 75 lb N/A was used as a grower control, resulting in 10 treatments (three cover crop treatments x three supplemental N treatments plus grower control). In 2019, additional bare ground controls (no cover crop) were added: no cover crop plus 35 lb N/A and no cover crop and no supplemental N. All cover crops were terminated two to six days prior to transplanting via multiple passes of a disk. Cover crop biomass production differed among years (Table 5); CC produced the most biomass in 2018, and HV produced the least; this trend was reversed in 2019, with HV producing the most biomass and CC the least. Other than the CC treatments in 2019, all cover crops produced well above the recommended rate of N for flue-cured tobacco (Table 5). AWP provided the most consistent biomass N between sites and years.

Even with the substantial amount of fixed N provided by the cover crop treatments (Table 5), no late season greening was observed among any of the experimental treatments. This would indicate that no residual N remained toward the end of the season. Both 2018 and 2019 had above average rainfall, which may have helped expedite the N mineralization process, thus minimizing any potential for delayed leaf ripening. Under drier conditions, in which N mineralization is stifled, there may be a greater risk of late season greening due to delayed N release. In general, the use of leguminous cover crops proved to be an effective, inexpensive N source for flue-cured tobacco and showed no apparent risk. 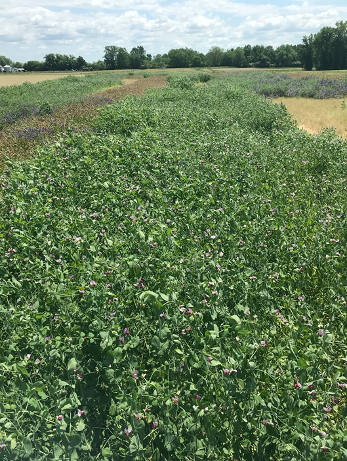 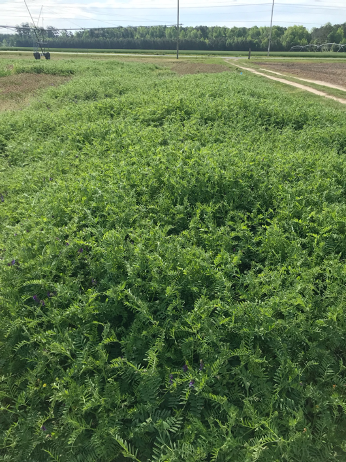 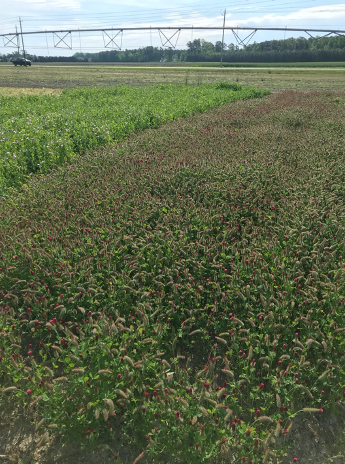 Skip to Additional Points for Consideration