The northern twostriped walking stick, Anisomorpha ferruginea, is a somewhat chunky walkingstick insect that matures and lays its eggs in the fall. Females are brown and about 4 inches long. Males are skinnier and smaller (11/2 inches long). These walkingsticks have been called devil's riding horses, prairie alligators, stick bugs, witch's horses, devil's darning needles, scorpions, and especially in the case of the northern two-striped walkingstick, musk mares and spitting devils. These walkingsticks feed on various trees and shrubs including landscape shrubs. This species often occurs in copula, with the relatively small, slender male riding on the back of the larger, stouter female. The eggs are laid in a dense mass on bark and other objects. One unpleasant feature of this species is its ability to squirt out a irritating defensive secretion when they are disturbed. Do not examine them closely as the secretion is very irritating to the eyes. They can squirt their irritating fluid up to a foot. Although northern twostriped walkingsticks are not common in North Carolina, when they do occur they can be numerous and damaging. A second, even less common large walkingstick here in North Carolina is the twostriped walkingstick, Anisomorpha buprestoides. It has somewhat to much more distinct parallel stripes along the back. 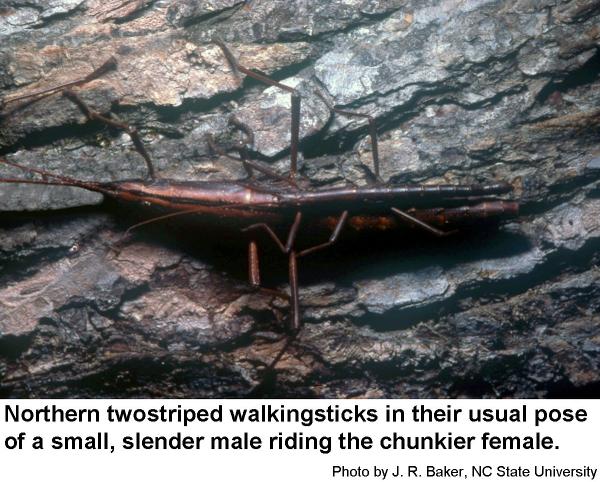 Northern twostriped walkingsticks are usually paired up when first noticed.

Northern twostriped walkingsticks are usually paired up when first noticed. 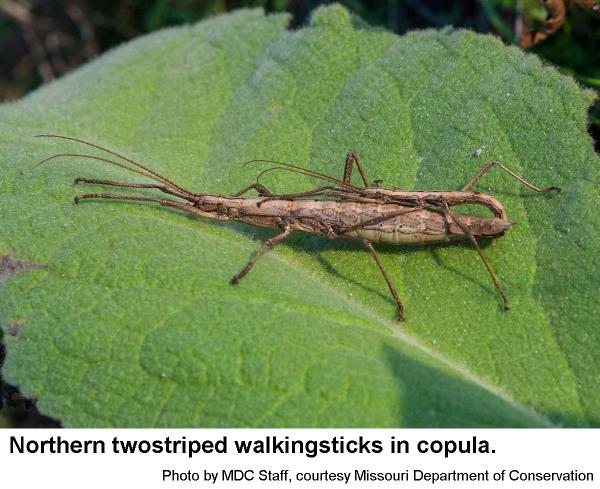 Anisomorpha walkingsticks have been reported feeding on trees and shrubs including azalea, crapemyrtle, lyonia or staggerbush, oak, privet, and roses.

In late fall (when adults are most abundant and conspicuous), Anisomorpha walking sticks are fairly difficult to control because the cool weather slows the activity of pesticides down and the insects are apparently capable of metabolizing the pesticides before they perish. It is a good idea to use a tablespoon of liquid hand dish-washing detergent in each gallon of spray along with a contact insecticide such as Orthene or a pyrethroid to increase the penetration of the pesticide through the integument. Most ornamentals are sufficiently hardened off in the fall so that the soap will not damage the foliage. Spraying should be done in the warmest part of the day, preferably on a warm fall day.