Oak treehoppers, Platycotis vitata, feed gregariously on oaks throughout the eastern United States. These insects are somewhat closely related to leafhoppers, but tend to be larger and to have the forward part of the thorax variously modified into bumps and spines. The oak treehopper is unusual in that there is a young white with red and black markings form and an older dull brown or dull green form. Some specimens may have a conspicuous "horn" projecting from the thorax over the head. These insects court and mate in the morning or evening. Females mate more than once, but only the sperm of her last suitor is used to fertilize her 40 or so eggs. This insect overwinters as females in leaf litter. They emerge and lay their eggs the following spring. When the eggs hatch, the new nymphs gather around a slit in the bark made by the female. The Nymphs apparently feed at the slit and the female broods over them. Females definitely protect their nymphs by bumping predators. Second generation eggs are laid in August and these hatch and develop into the overwintering forms. Nymphs have two tiny "spikes" on their backs and they tend to be contrastingly marked with white, black, and red. 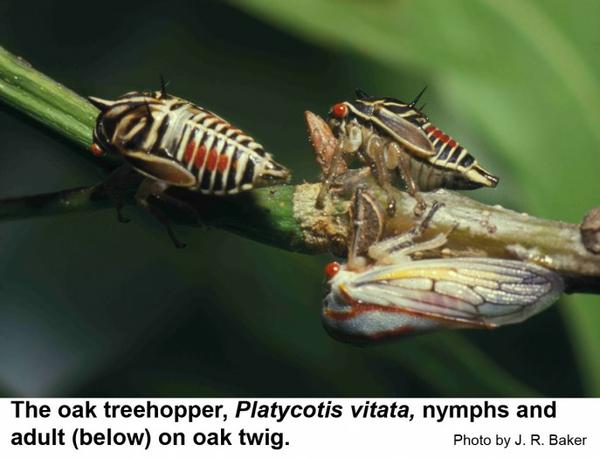 Female oak treehoppers guard over their nymph to protect them from predators.

Female oak treehoppers guard over their nymph to protect them from predators. 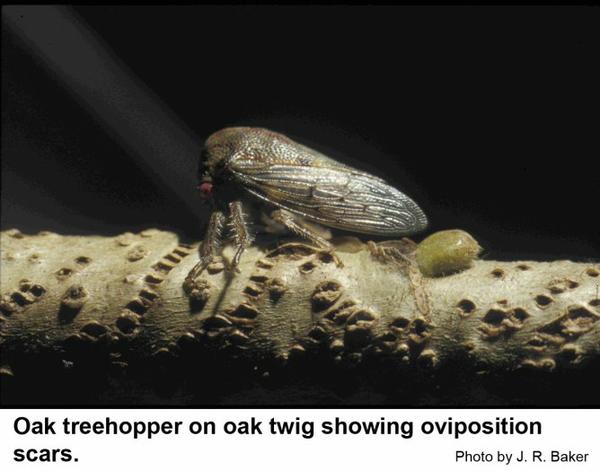 A dark oak treehopper and its oviposition scars on an oak twig.

A dark oak treehopper and its oviposition scars on an oak twig.

Oaks are the most frequently reported hosts of oak treehoppers, but they have been collected from river birch (Ohio) and chestnut (California).

Oak treehoppers usually cause little damage to shade trees, but it is possible they may get out of hand. Most of contact pesticides, such as pyrethroids, Orthene, and others, should give more than adequate control of oak treehoppers.