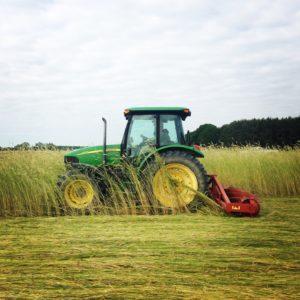 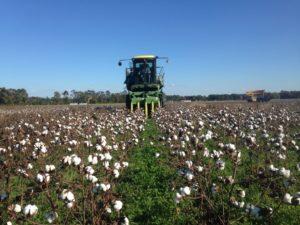 Organic cotton harvested in November 2016 at the Peanut Belt Research Station in Lewiston, NC. Note the regrowth of crimson clover in the understory.

Organic cotton harvested in November 2016 at the Peanut Belt Research Station in Lewiston, NC. Note the regrowth of crimson clover in the understory.

A few factors likely contributed to low cover crop biomass and weedy conditions in these studies. First, these studies were conducted on conventional sites with sandy soil types typical of cotton production in the state. Soil residual nitrogen was likely lower on these sites than would be encountered on organic sites with a long-term history of manure and legume use, and therefore there was less fertility available to grow the biomass needed for a successful roll-killed cover crop mulch. It is possible that an organic grower on the same soil type would have more residual nitrogen from previous fertility management and may see greater cover crop biomass production compared to what was observed in this study. Other factors that influence cover crop biomass production include early cover crop establishment and adequate cover crop fertility. Additionally, these studies were conducted on sites used for weed science research at NC State and therefore had extremely high weed pressure that may be unrealistic of normal field conditions, though it should be noted that some organic farms also have strong weed pressure.

One benefit observed from the cover crop mulch in this study was that the presence of the cover crop mulch always enhanced soil moisture availability compared to no cover crop. This can be an important benefit of cover crop mulches. Previous work from Georgia also shows that a cereal rye cover crop mulch reduced thrips pressure in cotton production (Collins, personal communication). Thrips pressure in this study was low enough that this benefit was not observed, but it could prove an important insect management tool for organic cotton producers. In 2015 RAFI began testing experimental cotton varieties that can compete well in cool, wet spring planting conditions often encountered in North Carolina. The experimental varieties were planted in 2015 and 2016 on four different planting dates starting in mid-May through early June. So far, yield results show that planting near the end of May, produced the highest yields in our trials. This year (2017) we have planted the six highest yielding experimental varieties at the Upper Coastal Plain Research Station and on an organic farm in eastern North Carolina.

RAFI is also experimenting with different weed management strategies for organic cotton production. In 2015, cross cultivation was tested. This is where the field is cultivated in two directions, the first pass parallel to the row and the second pass at an angle that destroys some of the plants in the row. While this did reduce weed density, there was still a significant amount of weed pressure and reduced yield due to the cotton plants lost during this process. The overall yield was 435 lbs/acre, but the plots were managed conventionally other than for weed control. In 2016, with input from an organic farmer that has grown organic cotton in the past, we cultivated with a Danish tine once it emerged and then used a rolling cultivator for the next eight weeks. This test plot averaged 568 lbs/acre.

Both the NC State Organic Grain program and RAFI are dedicated to continue organic cotton research in North Carolina. If reliable production practices can be identified, this could prove a profitable organic crop for producers in the state. Future research focus areas include continued investigation of cover crop mulches for weed control and soil moisture conservation under varying fertility regimes, flame cultivation for weed control, insect control, and varietal investigation.

A special thank you to the North Carolina Cotton Producers Association for funding this cotton production in rolled cover crop mulch research.