Many ornamental crop species (including trees, shrubs, and bedding plants) are susceptible to diseases caused by Phytophthora, a genus of plant-pathogenic oomycetes (also known as water molds) that can persist in soil for several years. Phytophthora root rot or crown rot symptoms often include loss of older foliage, foliar blight, chlorosis, decline in vigor, branch dieback, and wilting (Figure 1, Figure 2, and Figure 3). Phytophthora species in a landscape setting may be managed by improving soil drainage, avoiding overwatering or overfertilizing, and preventing the spread of soil, water, and plants from infested areas (see Phytophthora Blight and Root Rot on Annuals and Herbaceous Perennials). Chemical means of managing these diseases are limited and generally impractical in landscape settings.

Because there are few effective chemical management options, using resistant plant species is a better option. However, there have been limited studies of the plant species and cultivars that can thrive and grow in soils in which Phytophthora crown rot and root rot have occurred. Table 1 includes some suggested plant species for landscapes with a history of Phytophthora spp. infestations, some of which we evaluated in a summer 2018 study (Table 2). In our study, we evaluated multiple species and cultivars of summer annuals and herbaceous perennials for tolerance or resistance to Phytophthora. 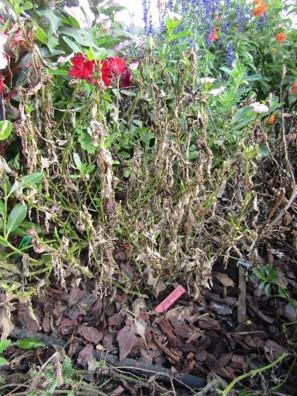 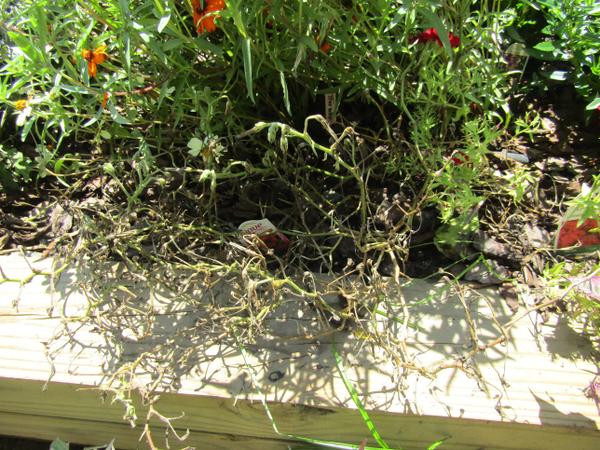 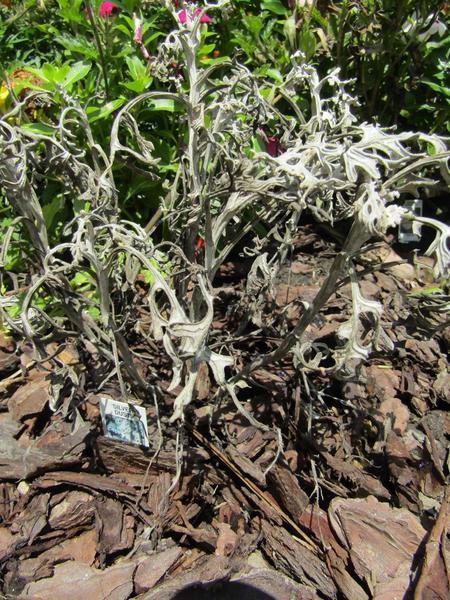 Cultivars of plant species listed in bold were tested in our 2018 study.

*Other hollies with I. cornuta parentage may also be good alternatives. Note that many Ilex species are susceptible to species of Phytophthora—for example, blue hollies (Ilex x meserveae), Japanese holly (I. crenata), possumhaw (I. decidua), and inkberry (I. glabra).

**Rose is occasionally infected by Phytophthora spp. in the nursery, but we do not consider it a primary pathogen in the landscape.

Three landscape beds were established in western North Carolina (Mills River, Waynesville, and Salisbury) (Figure 4, Figure 5, and Figure 6) and were infested in June 2018 (Figure 7 and Figure 8) with three species of Phytophthora known to cause disease of nursery crops: P. nicotianae, P. tropicalis, and P. dreschleri. Each landscape bed was divided into four quadrants, and one plant of each cultivar was planted in each of the quadrants. Plants known to be susceptible to Phytophthora spp. (gerbera daisy, annual vinca, petunia, and dusty miller) were included as positive controls to confirm inoculum was active. The landscape beds were irrigated daily using soaker hoses to excessively water the raised beds in order to create environmental conditions conducive for the disease.

Plants were rated every two weeks throughout the 2018 growing season (June 2 to October 3) for disease incidence and severity based on visible symptoms of root rot, crown rot, or aerial blight (Figure 9). The disease rating scale was Excellent, Good, Fair, Poor, and Other (Table 2). As disease progressed, symptomatic plants were harvested and processed to check for the presence of Phytophthora and other common pathogens. If other diseases were diagnosed, these cultivars were placed in the “Other” category, as these circumstances prevented a fair trial of the plants’ resistance to Phytophthora. The North Carolina State University Plant Disease and Insect Clinic provided disease diagnoses for some plants. 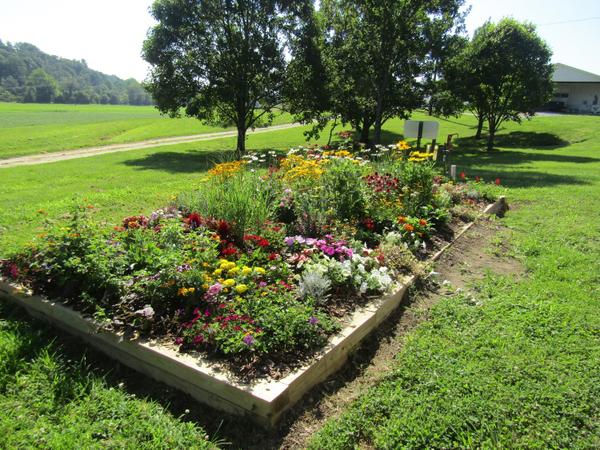 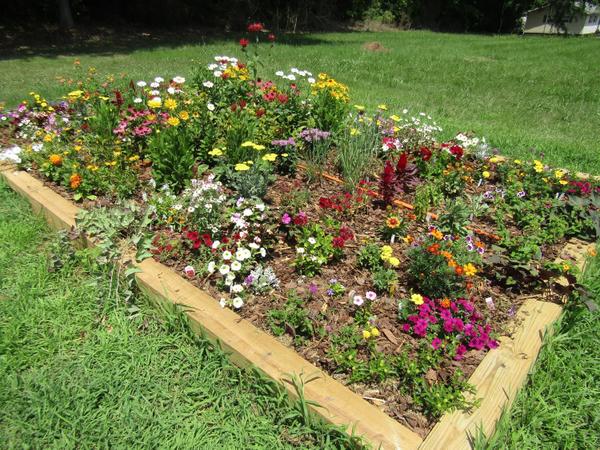 Figure 5. Landscape bed at the Piedmont Research Station in June 2018.

Figure 5. Landscape bed at the Piedmont Research Station in June 2018. 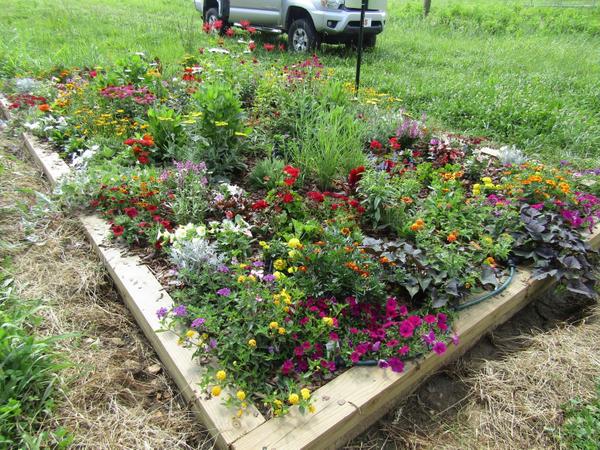 Figure 6. Landscape bed at the Mountain Research Station in July 2018.

Figure 6. Landscape bed at the Mountain Research Station in July 2018. 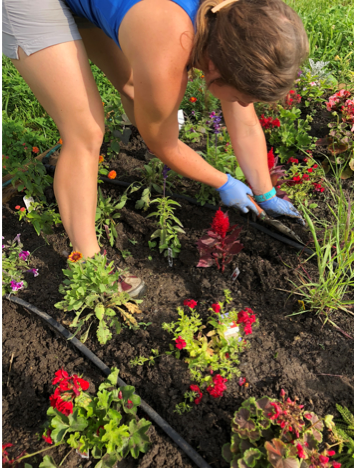 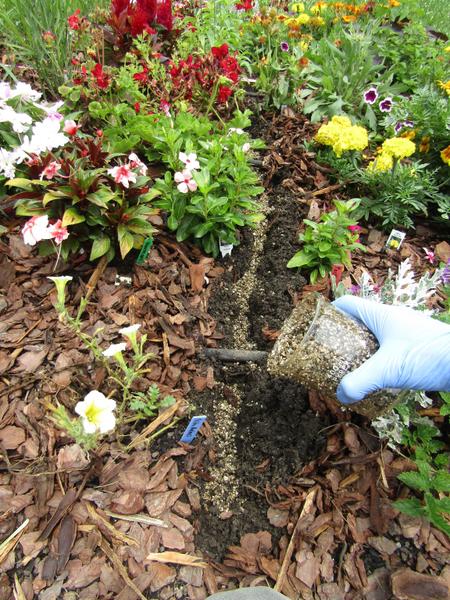 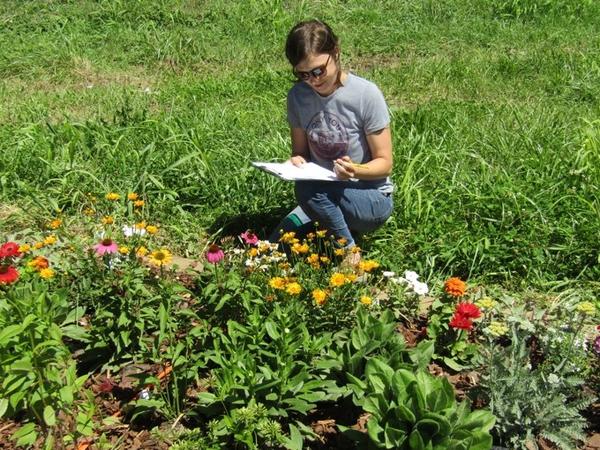 Skip to Results and Conclusion

At the end of the season, we identified 14 cultivars among 9 annual plant species and 8 cultivars among 6 herbaceous perennial plant species that rated Excellent or Good throughout the 2018 growing season (June 2 to October 3) (Figure 10, Figure 11, and Figure 12). Phytophthora was recovered from seven cultivars of the evaluated annuals and five cultivars of the evaluated perennials, which ranged in appearance from Excellent (asymptomatic) to Poor (symptomatic). P. nicotianae or P. drechsleri was recovered from each known susceptible host, which confirmed that inoculum was active in the beds. Interestingly, P. cryptogea was recovered from three cultivars, even though the species was not intentionally introduced into the landscape beds. Other diseases such as Verticillium wilt, Fusarium wilt, and powdery mildew, as well as abiotic disorders, were diagnosed on plants that performed Fair, Poor, and Other. These susceptibilities are noted in Table 2 and are the cultivars not listed in our recommendations. P. nicotianae and Fusarium spp. were isolated from root tissue of one Zinnia ‘Star White’ plant, but this variety retained its vigor and the population was not considered diseased. This study provides evidence of 22 ornamental plant cultivars within 15 herbaceous plant species that can be used as acceptable alternatives in landscape beds infested with several species of Phytophthora.

We plan to continue using our landscape beds to evaluate other annuals and perennials. In addition to evaluating new plant species and cultivars, we will re-evaluate selected cultivars that had a 2018 performance rating of Excellent, Good, Fair, or Other to ensure consistent results. Cultivars rated as Excellent or Good are assumed to be at least somewhat tolerant of Phytophthora, but additional evaluations are needed to confirm that they have a practical level of tolerance or resistance. 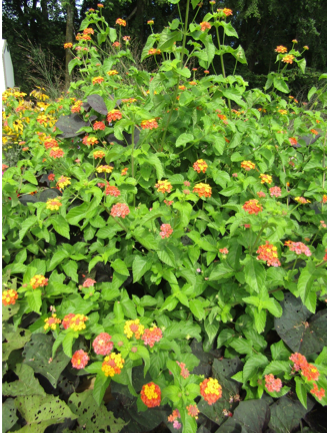 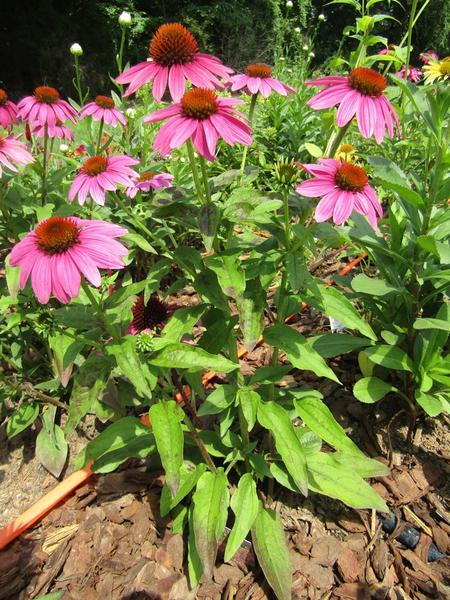 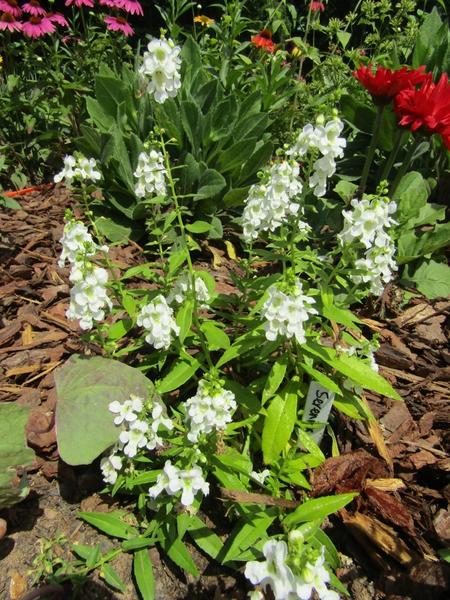 Some of the plants listed in this publication may be susceptible to other plant pathogens. Good cultural management practices are recommended to keep pests and pathogens out of the landscape.

The authors would like to thank Area Specialized Extension Agents Amanda Taylor and Stacey Jones and the participants at the 17th Ornamentals Workshop in Kanuga (Hendersonville, NC) for their input into this publication. We’d also like to thank the nurseries in North Carolina who generously provided plants that made this study possible: Hawks Ridge Farms, Metrolina Greenhouses, Hoffman Nursery, King’s Nursery, Plantworks Nursery, Cold Mountain Nursery, Rountree Plantation, Homewood Nursery and Garden Center, and Fairview Garden Center. Thanks also to M. Munster, F. Baysal-Gurel, and M. Daughtrey for providing valuable feedback on this publication.

This research was supported by a grant from the Horticultural Research Institute (HRI). Its contents are solely the responsibility of the authors and do not necessarily represent the views of HRI.