Linnaeus named the pigeon tremex insect Tremex columba. Columba is the name of a bird genus that contains the ordinary pigeon, hence the common name pigeon temex. How Linnaeus saw a connection between this slender, primitive wasp and pigeons is a mystery. These wasps are also called horntails because of a hornlike process at the top rear of the adults and larvae. These wassp are 1 to 11/2 inches long with straight-sided, cylindrical, reddish-brown to black bodies. The abdomen has yellow and black bands. The wings are dark brown to black. Females have a longer projection that arises from the undersurface of the abdomen called an ovipositor with which they lay eggs in diseased or wounded trees by jabbing them one at a time. Sometimes females cannot disengage the ovipositor and they die there. The larvae hatch and bore further into the host tree. They eventually grow to about 2 inches long. Development takes up to two years. Mature larvae pupate inside the tree, and some time later new adults bore out to mate and infest other trees. 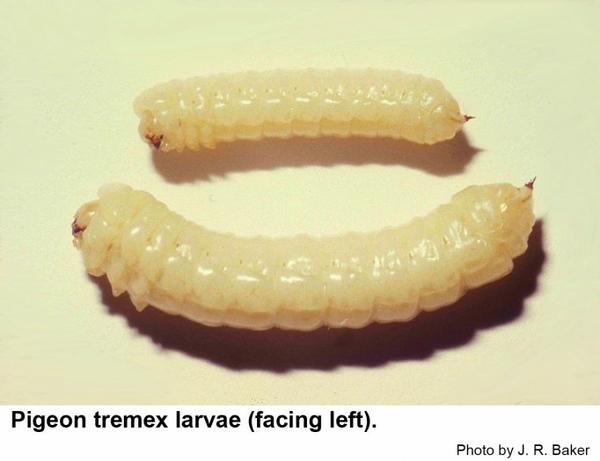 Pigeon tremex grubs tunnel inside trees. Note the horn at the rear.

Pigeon tremex grubs tunnel inside trees. Note the horn at the rear. 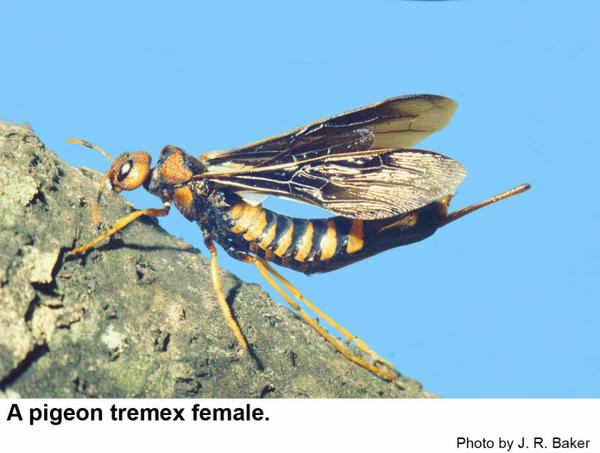 The pigeon tremex is a slender wasp with a short horn above the ovipositor. .

The pigeon tremex is a slender wasp with a short horn above the ovipositor. .

Elms and sugar maple are preferred hosts although most hardwoods can be infested including silver maple, ash, cottonwood, and elm. Pigeon tremexes tend to attack diseased or declining trees or branches where they bore into the wood and weaken it. Sometimes they transmit Cerrina unicolor, a rot fungus. At one time, the pigeon tremex was a fairly common pest especially in the northeastern United States, but here in North Carolina it seems to be more of a curiosity.

In general, the best control of a woodboring insects is to keep trees healthy and try not to wound the bark if possible. At this time, no insecticide effective in killing the horntail larvae deep inside the wood is available.