Adult pine bark adelgids, Pineus strobi, are small, dark (purplish to yellow) insects covered with a white, flocculent material. Eggs are milky to light yellow-brown but as the embryo matures, the eggs darken. Nymphs resemble but are smaller than adults. At first naked and yellow, newly hatched nymphs soon darken and begin to secrete white, fluffy threads. Adelgids are among the most commonly reported insect pests of white pines. Pine bark adelgids can overwinter in all stages, though mostly as immature females. In late winter, development resumes, and each female lays up to 24 eggs in a woolly mass. After laying her eggs, the female dies. From these eggs develop both winged and wingless forms. Of the several different forms of immature adelgids (a characteristic of phylloxerids), only the crawler stage and winged forms are capable of migrating. The stationary wingless forms continue to reproduce parthenogenetically all season. There are five or more generations per year. In late winter and early spring, pine bark adelgid populations can become exceedingly abundant, but as soon as the weather warms up and syrphid maggots, lace wings, lady beetles, and other predators become active, adelgid populations usually crash to very low levels. 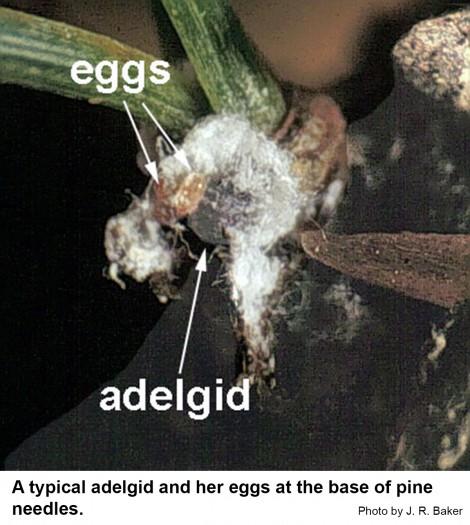 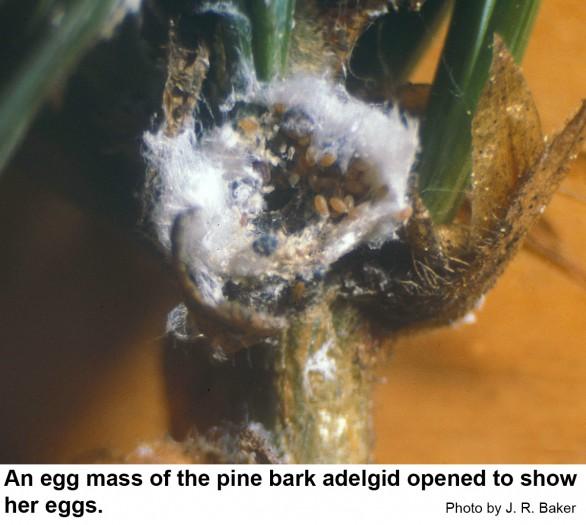 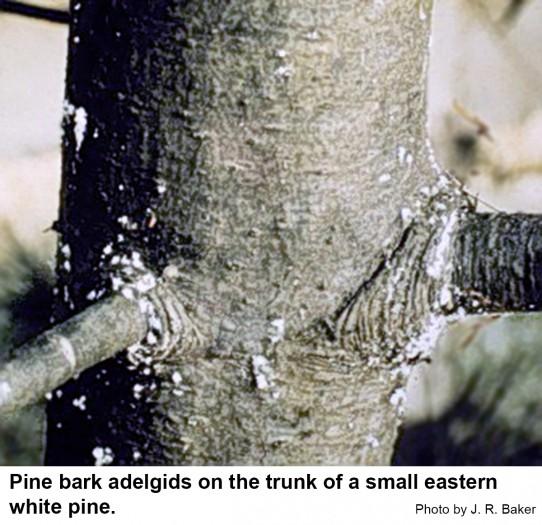 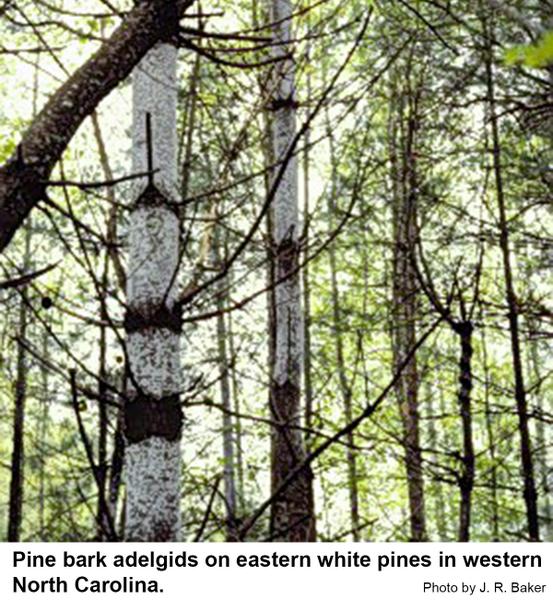 Found principally on white pine, the pine bark adelgid occasionally infests Scots, Austrian, and other pines. PIne bark adelgids are more unsightly than injurious on older trees, but they may seriously damage newly planted trees in landscapes. The needles of heavily infested saplings turn yellow. Small trees may be stunted or killed.

Maggots of hover flies and other flies and lady beetle larvae feed on pine bark adelgids in warm weather. Trees that are heavily infested and are showing symptoms of decline should probably be sprayed for adelgid control. Horticultural spray oil can be applied during the winter and before new growth emerges in spring. Pine bark adelgids are not resistant to pesticides. Insecticidal soaps are very effective as are horticultural oils (oils may remove the white wax from the needles of white pines, turning them a sickly, yellowish green). Oil sprays may damage white pine during the growing season, especially in dry weather. Systemic insecticides such as imidacloprid are also effective as are pyrethroid and other contact insecticides.