The pine needle gall midge, Thecodiplosis brachynteroides, is a tiny, mosquito-like fly that lays its eggs on sprouting pine needles. Tiny maggots hatch, wriggle down the needle to feed and induce developing needles to form pale green galls in which the maggots feed and grow. Older maggots are orange, and shaped like fat cigars. At least two maggots can infest a single gall. Galled needles are stunted and have greatly swollen bases, and the galls darken as they age. When mature, maggots probably drop to the soil to spend the winter in a silken cocoon as do other closely related species. Sometime during the winter and early spring, maggots molt into pupae from which a new generation of midges emerges to infest newly sprouting needles. We very likely have only one generation per year in North Carolina although Virginia pine produces a second flush of growth during the growing season.. 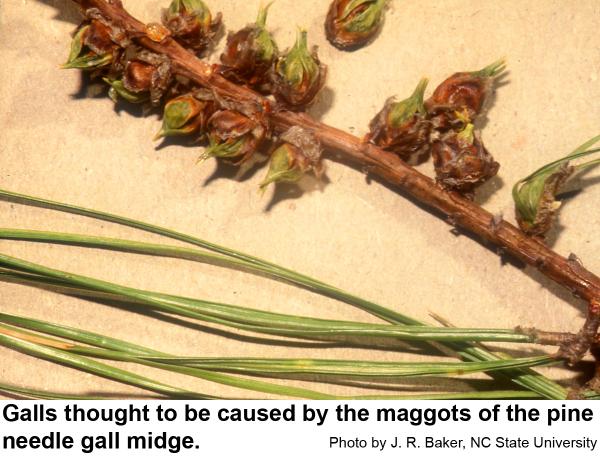 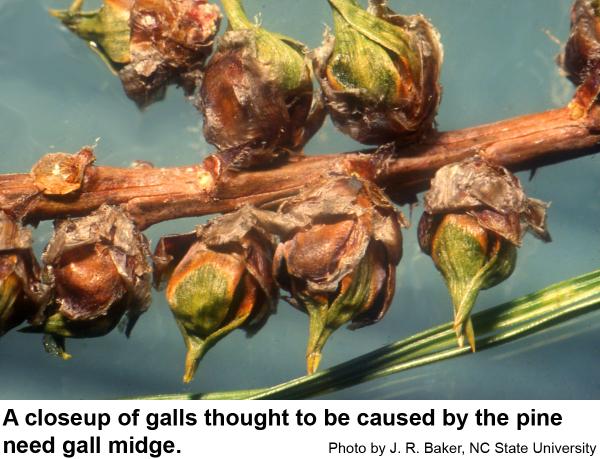 Virginia pine seems to be the primary host plant for the pine needle gall midge.

Once the gall have formed, no insecticide can improve the appearance or length of the infested needles. Because gall midges are plagued by parasites, their populations are likely to decline to the point that very few galls can be found in following years.