The term "powderpost beetles" refers to several groups of small woodboring beetles. In North Carolina, our primary concern is with anobiid ("an-oh-be-id") powderpost beetles, which attack the softwood species (conifers), such as spruce, pine and fir that are commonly used to make floor joists, wall studs and other structural lumber. Lyctid ("lick-tid") powderpost beetles attack only hardwoods, such as oak, ash, hickory, and maple. They tend to be a problem with antique furniture, cabinets, wooden floors and some interior moldings/trim in houses. Infested wood may look fine on the outside with no real evidence of an underlying problem.

Powderpost beetles lay their eggs in cracks, crevices or wood pores, preferably in unseasoned and unfinished (no paint or stain coating). The hatching larvae (immatures) feed primarily in the sapwood (outer lighter-colored wood). The name "powderpost" refers to the type of damage caused by the beetles. As the larvae feed, they produce the characteristic flour-like fecal material or "frass". Anobiids usually take 2+ years to complete their life cycle. Lyctid beetles may complete their life cycle in as little as three months, but more typically 9-12 months (or longer). We rarely find the actual beetles and only months or years later do we discover the damage. Typically, the only indication of a powderpost beetle infestation are small round holes about 1⁄32 - 1⁄16 inch in diameter scattered over the wood surface (Figure 1). In some cases, only one or a few boards are infested. In other instances, several joists may show sign of powderpost beetle activity. At first sight, people often assume that these holes are made by insects boring into the wood. The holes are actually made by adult beetles exiting the wood after they complete their life cycle. As the beetle emerges from the hole, it pushes out frass (yellow arrows in Figure 1) that will be found streaming from these holes or on the ground beneath the infested boards or surrounding the holes on horizontal wood. The frass of the lyctid beetles looks and feels like talcum powder. The frass of anobiid beetles is powdery but has a gritty texture. Frass that is yellow and caked is usually considered to be "old" and likely an indication an infestation that is no longer active. You may find exit holes and frass almost any time of the year, particularly in heated buildings or in crawlspaces (Figure 2). However, the peak time to watch for emerging beetles is usually May through August.

You cannot simply look at a piece of wood and know if beetle damage is severe enough to warrant repair or replacement. Probing the wood may give you some indication of the extent of the damage. If you are concerned about the condition of structural wood, such as floor joists, you may need to contact a general contractor or structural engineer. 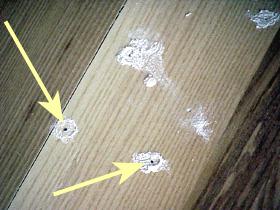 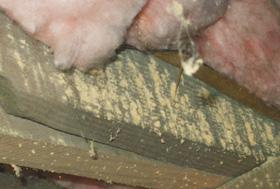 Figure 2. Signs of anobiid powderpost beetle activity include emergence holes and sawdust-like debris around the openings as seen on these joists.

Figure 2. Signs of anobiid powderpost beetle activity include emergence holes and sawdust-like debris around the openings as seen on these joists.

Many powderpost beetle problems are related to high moisture in the wood, particularly in crawlspaces. Wood moisture levels need to be closer to 13% to become less favorable to the beetles. In assessing problems in your home, the inspector needs to collect moisture readings on floor joists in several areas of the crawlspace (Figure 3). Wood in corners, particularly with poor ventilation, will generally have higher moisture readings. Weather and time of year also influence the moisture levels in wood. You can reduce moisture in the crawlspace by improving the ventilation and/or installing a 6-8 mil plastic moisture barrier covering 70-80% of the soil. In some instances, the crawlspace may be "enclosed" or encapsulated which is a more elaborate process that requires installing a dehumidifier. Spraying the wood with an insecticide is the most common method of chemical control for powderpost beetles. Pesticides available for control of powderpost beetles are listed in the North Carolina Agricultural Chemicals Manual. Many pesticides will coat the surface and kill beetles emerging and/or prevent new infestations. Water soluble pesticides containing "borates" (disodium octaborate tetrahydrate) will penetrate the wood slightly and give extended protection against beetles and other insects as well as fungi. . If wood behind walls or in other inaccessible areas is infested, then it may be necessary to fumigate which is a costly and time-consuming process that requires tarping the house and introducing the fumigant (currently just one chemical - sulfuryl fluoride). Fumigations can be very effective because they reach areas that are inaccessible with conventional insecticide sprays. However, fumigation is also limited in that it does not prevent future beetle infestations. 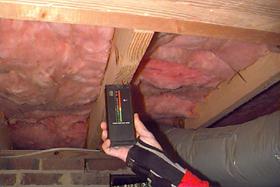 Skip to Fungi Associated with Wood

There are several types of fungi associated with wood, but not all of them actually cause damage.

Surface Mold and Mildew
Mold and mildew on floor joists may indicate excessive moisture in the crawlspace. However, mold and mildew do not cause wood to decay. In these instances, chemical control is not needed to protect the wood from decay, but you should take some steps to lower the moisture in the crawlspace (the same steps outlined for powderpost beetles). Since mold may be associated with indoor air quality and respiratory health issues, potentially severe problems should be evaluated by qualified individuals. For additional information, visit the EPA's mold website.

Sapstain Fungi
These fungi are similar to surface molds, except that the discoloration goes deeper into the wood (Figure 4). The wood may have a blue, black or gray color; however, the staining fungi do not weaken the wood structurally. Sapstain fungi are an indication that the wood was wet at some time. However, once the wood dries, the fungus becomes dormant and stops growing. No chemical control measures are needed.

Brown Rot and White Rot
These fungi actually cause structural damage to wood. They often produce a white cottony growth on the surface of the wood. Brown rot is one of the most common types of wood-decaying fungi. As the wood decay, it darkens, shrinks, and twists, with cracks forming across the grain of the wood. Finally, the wood becomes dry and powdery. Wood decayed by white-rot fungi has a bleached appearance and is fibrous and soft (sponge-like). Wood that is saturated with water (30% moisture readings) will rot. If the wood moisture drops below 20%, then these fungi will not grow. Brown and white rot fungi can be controlled by removing the source of moisture that allows them to grow (e.g., by improving ventilation or drainage, repairing leaks, etc.). Treating the wood chemically will halt decay, but it is still important to address the sources of the moisture problems that caused the initial problem. If the moisture source cannot be eliminated, decayed wood should be replaced with pressure-treated wood.

Water-Conducting Fungi
Most wood-decaying fungi only grow on moist wood and do not attack nearby dry wood. However, there are some brown-rot fungi, sometimes called "water-conducting fungi" which can conduct water for several feet through root-like strands to moisten dry wood. The most common type of water-conducting fungus in North Carolina is Meruliporia incrassata (sometimes called by its former name "Poria"). These fungi are common in the southeastern United States and can cause extensive damage in 2-3 years. The damage is similar in appearance to brown rot (Figure 5). The problem is most common in new or remodeled houses. In order to control water-conducting fungi, you must find and eliminate the source of moisture that supports fungal growth. The top priority should be to reduce and maintain the wood moisture content below 20% (preferably below 15%). Untreated wood in contact with or near the soil is most vulnerable. Where the fungus grows from a porch, the soil should be removed from the porch next to the foundation wall to prevent continued growth of the fungus into the house. Untreated wood should be at least 8 inches from the soil. If this is not possible, then treatment with a borate pesticide can be used. 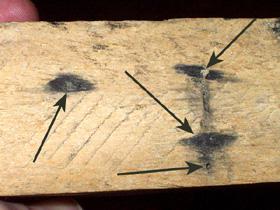 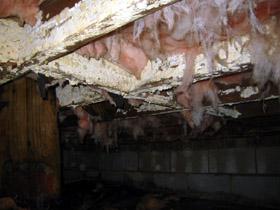