CAUTION: This information was developed for North Carolina and may not apply to other areas.

Laurel wilt is a generally fatal disease of red bay (Persea borbonia) and other tree species in the Laurel family (Lauraceae). Suspected host plants in addition to red bay are sassafras, pondspice, pondberry, and avocado. The disease is caused by a fungus (Raffaelea lauricola) that is introduced into host trees by the recently introduced the red bay ambrosia beetle (Xyleborus glabratus) (Figure 1). The fungus plugs the water-conducting cells of an affected tree and causes it to wilt, foliage to brown, and tree to eventually die (Figure 2).

Laurel wilt has caused widespread and severe levels of redbay mortality along the Southeastern coastal states from Mississippi to southern North Carolina. This insect/disease complex was first detected in North Carolina in Bladen county in March 2011. Red bay is an important tree in the maritime forest and is sometimes found in the landscape. The potential damage to the avocado industry in Florida is of major concern. 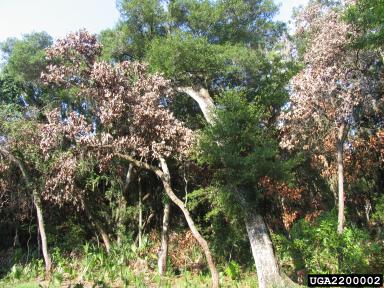 Damage to trees from the beetle itself is minimal, and the beetle does not feed on the wood. The beetle cultivates a fungus for food. This ambrosia fungus can then interfere with normal water movement within a tree. The fungal pathogen resides in specialized pockets (mycangia) within the head of these beetles. The ambrosia fungus is thought to ooze out of the mycangia in the galleries and enter the water conducting tissues (xylem) of redbay and other susceptible hosts as beetles bore into trees (Figure 3). Spores of the fungus reproduce and spread within the xylem and probably plug the tree’s water conducting tissue, resulting in wilt. More work needs to be done to determine if only one fungus is involved. It is not fully understood if the beetles attack preferred locations on trees.

Field observations in Florida indicate that the red bay ambrosia beetles can attack smaller branches in the upper crowns of trees, but have also been found on the main stems of apparently healthy large trees. Small frass "toothpicks" are sometimes noticeable on active infestations.

Occurrence of the disease is dependent upon the presence of the beetle, the fungus and the host plant. Beetles are not thought to move long distances on their own over a season. Infested wood containing beetles and fungus can move the beetles farther than they would spread on their own. Avoid moving firewood, or mulch from redbays and other host plants out of the area from which it originated.

Burying, burning, or chipping host tree material may have benefit if the infestation is restricted. Standard chipping may not destroy all of the ambrosia beetles due to their tiny size, but may reduce breeding potential.

Nursery stock in the laurel family showing signs of wilt, sapwood discoloration or ambrosia beetle attack should not be sold or transported, and should be reported to the NCDA&CS for follow up inspection. Similarly, if purchasing a host plant from a store, inspect it for beetle holes, frass, or wilt.

Efficacy is untested, but with other ambrosia beetles, certain products containing permethrin or bifenthrin have been used with limited success as a bark spray for specimen trees or valuable nursery stock to reduce the probability of beetle attack. There is no rescue treatment.

Based heavily on information from USDA Forest Service and the Florida Department of Agriculture and Consumer Services work of Albert E. Mayfield III.