The red bay triozid scientific name, Trioza magnoliae, was misnamed as this insect only infests bays in the genus Persea not sweet bay or other magnolias. Eggs have not been described. Young nymphs are yellow and flat. Mature nymphs are green with orange wing pads, red eyes, and short black antennae and sparse waxy filaments. Adults are pale greenish-yellow, about 1/8 inch long, and resemble miniature cicadas. It was speculated that eggs are laid under the epidermis of leaves. However, it may be that the new females lay their eggs inside leaf buds much like the related boxwood psyllid does. If this is true, the insect could spend the rest of the summer, fall, and winter inside red bay buds as eggs that hatch as plant growth resumes. As newly hatched nymphs begin to feed, the margin of the leaf begins to curl and ultimately completely envelops nymphs in a swollen, elongated, pocket-like gall. The galls may be over 1/2 inch long. When the triozid nymphs are mature, the gall splits along the edge to release them. The cast skins can be seen on the lower leaf surface. In Florida, adults seem to have a peak emergence in mid-May with at least three overlapping generations. If bays have more than one flush of growth in North Carolina, it is likely that a new generation will develop on each new flush.

The red bay triozid infests red bay, silk bay, and swamp bay. Leaves attacked just as they are opening may be severely distorted. There may be one to eight galls per leaf, and up to 80% of the foliage may have galls. However, even heavy infestations cause little real damage to the health of infested bays. 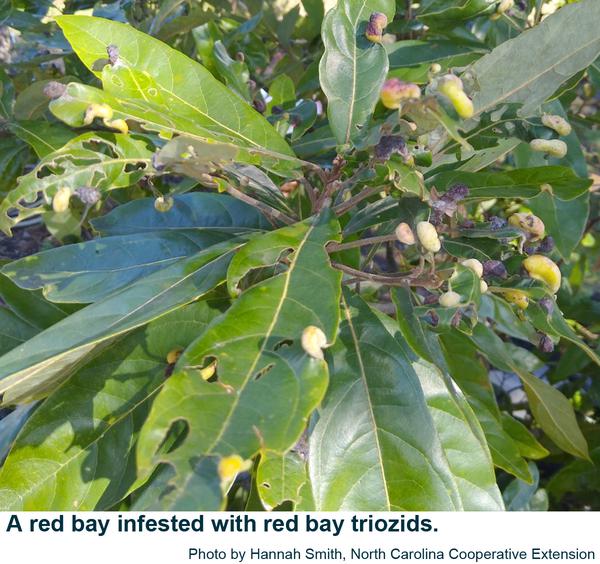 Red bay triozid galls are alarming but harmless to the overall health of red bay.

Red bay triozid galls are alarming but harmless to the overall health of red bay.

In spite of living inside a gall, red bay triozid nymphs may be parasitized by tiny wasps. Parasitized nymphs turn dark. Tiny maggots of a midge also preys on red bay triozid nymphs. Birds have also been observed opening the galls to feed on the nymphs. Because the galls can only develop only on new, developing leaves, controlling the very young triozids should stop gall development. Spraying with a neem seed extract or with a synthetic systemic insecticide at bud break should protect the new leaves from the developing triozid nymphs. Systemic insecticides such as acephate (Orthene) and imidacloprid should also be effective. All three of these insecticides should be available in the plant centers of big box stores. Imidacloprid can also be applied to the soil under red bays unless there is a well or open water nearby. As a soil treatment, imidacloprid will be more effective if it is applied in January or February some weeks before bud break. 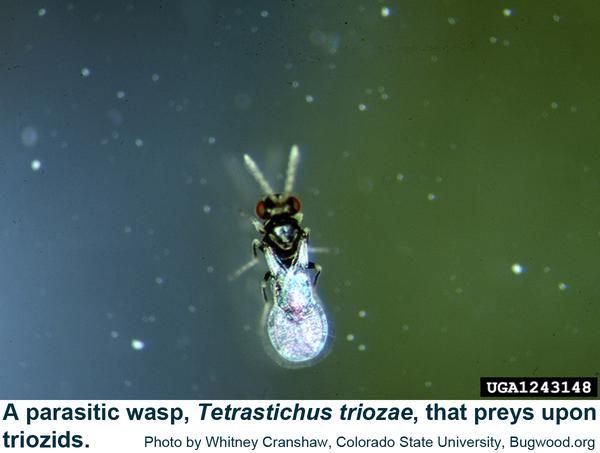 Eulophid wasps are teeny-weeny and harmless to people but deadly to red bay triozids.

Eulophid wasps are teeny-weeny and harmless to people but deadly to red bay triozids.