The golden rain tree bug, Jadera haematoloma, is in the same family as the boxelder bug and is similar in appearance and biology, the biggest exception being that goldenraintree bugs feed on the seeds of golden rain tree and chinaberry whereas boxelder bugs feed on the seeds of boxelder and other maples as well as ash. Golden rain tree bugs are very dark gray with only two bright red lines on the thorax whereas boxelder bugs have three bright red lines on the thorax as well as red markings on the wings. Golden rain tree bug eggs are more or less oval shaped. The nymphs are bright red with black legs and antennae, but as they get older, the head, thorax and wing pads become very dark gray to black. Golden rain tree bugs can be a nuisance in homes in the fall as they invade to find overwintering sites. They also spend the winter in plant debris. Next spring females lay their eggs in the soil under a golden rain tree. Two weeks later, tiny nymphs hatch and begin feed, grow, and mature into adults in July. Females then lay eggs that produce a second generation that matures and overwinters. 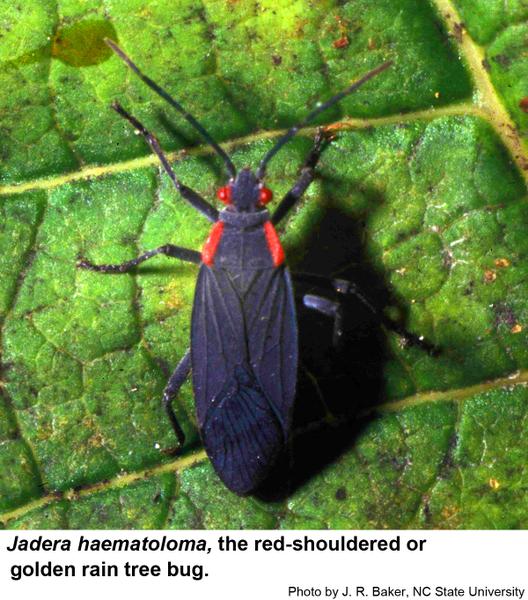 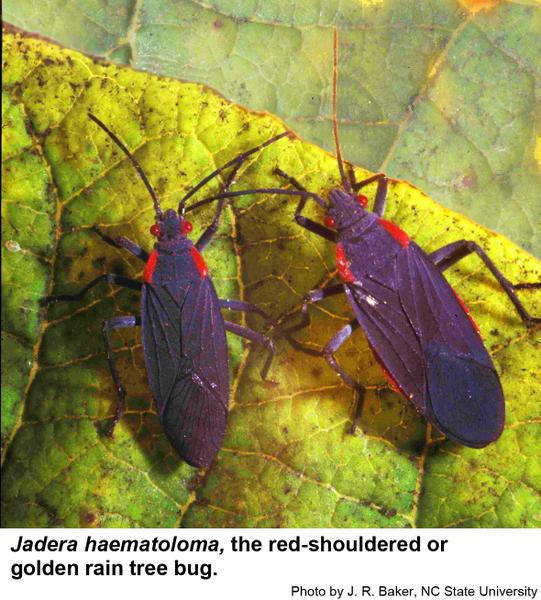 Golden rain tree bugs do not seem to cause damage to the foliage of golden rain trees or chinaberry trees. They can be a nuisance in homes in the fall as they invade to find overwintering sites.

Golden rain tree bugs noticed in late spring or summer are much more susceptible to pesticides than later in the fall when they start invading houses. When the weather is cool and they are ready to hibernate, golden rain tree bugs are much more tolerant of pesticides. If crushed, these bugs leave a red stain but they can be gently vacuumed up without staining walls or furniture. It would be a good idea to empty the vacuum canister soon as the bugs may impart a lasting odor in the machine as they rot.