Root knot nematodes are microscopic roundworms that are widely distributed throughout North Carolina on many crops and cause varying degrees of damage to cotton. Root knot of cotton is caused by Meloidogyne species of nematodes, most commonly the southern root knot nematode (M. incognita). Most recently introduced to North Carolina, the invasive root knot nematode Meloidogyne enterolobii also affects cotton. This is an invasive nematode that is only officially reported in Florida and North Carolina. Other official reports originate from Brazil, Mexico, Malawi, South Africa, West Africa (Senegal, Ivory Coast and Burkina Faso), China, Vietnam, Central and South America, France, and Switzerland.

Root knot nematodes have a very extensive range of hosts, including a great number of rotational field crops used in North Carolina such as tobacco, soybean, sweetpotato, corn, many vegetable crops, potatoes, and numerous weed species. Rotational crops like peanut are poor hosts to the southern root knot nematode, but reproduction may occur on corn.

Meloidogyne enterolobii also appears to have a wide range of host crops, which may make it difficult to limit populations in a given field. Peanuts and cabbage are reported to be poor hosts for M. enterolobii and may be good candidates for rotational crops. Ongoing efforts are underway to identify the host range of the invasive root knot nematode.

Skip to Life Cycle and Favorable Conditions for Disease

Root knot nematodes can be found in the soil in several life stages. Eggs are produced en masse by endoparasitic females, and the eggs survive in the soil until conditions are conducive for emergence. The juveniles hatch from eggs, move through the soil via water films and invade nearby roots. The juvenile nematodes can often become spherical-shaped females. The nematodes in the root stimulate the surrounding tissues to enlarge to form giant cells, which produce the characteristic root gall. Mature females continue to lay hundreds of eggs in egg masses within roots that then hatch in warm, moist soil to continue the life cycle.

The length of the life cycle depends on environmental conditions and may vary from 4-6 weeks to 10-15 weeks depending on temperature and root knot species. Root knot nematodes also require adequate soil moisture availability for egg hatching and movement through soil to host roots.

Root knot nematode infestations can often be identified in the field since it produces galls on the root system of cotton plants. Galls are swelling tissue of the root system associated with the feeding of the nematode inside the root (Figure 1).

Field symptoms are found in patches where the concentration of nematodes is high. Yellowing and stunted plants are associated with nematode infection (Figure 2). Foliar symptoms may also be related with secondary infections caused by fungi after the root damage caused by the nematodes. 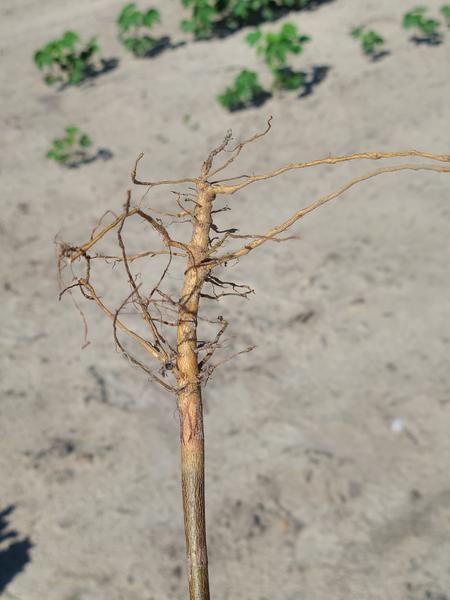 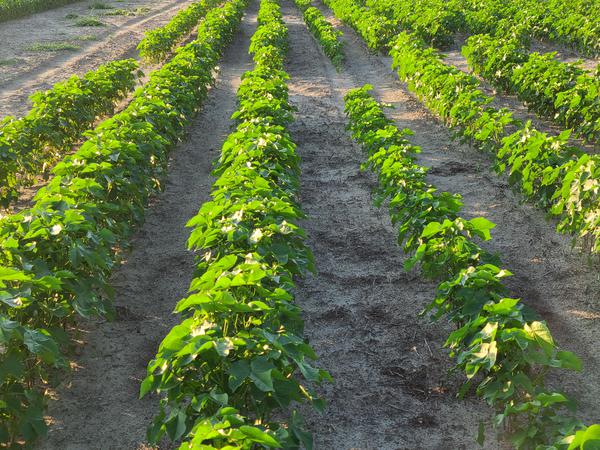 Diagnosis of significant root knot nematode damages can be evaluated by digging roots of affected plants to look for galling symptoms. Early in the growing season, galls may not necessarily be present. If there are no visible symptoms on plants, soils samples can be taken and sent to a diagnostic laboratory such as the North Carolina Department of Agriculture & Consumer Services, Agronomic Services, Nematode Advisory and Diagnostic Laboratory.

Fall soil samples should be taken to evaluate populations in problem fields to plan for the following growing season. Nematode populations are often not evenly distributed in a field, and large areas should be sampled to get an accurate evaluation of a 4-5 acre field. In a zig-zag or irregularly-shaped pattern, 20 to 30 soil cores should be collected with a soil probe at a depth of 6 to 8 inches. Plants with soil may also be sent to the NCSU Plant Disease & Insect Clinic for problem diagnosis. When sending samples include an accurate crop history, information about fertility, herbicides, and cultural practices to aid in diagnosis.

Traditional soil assays cannot differentiate between root knot nematode species due to the similarities of physical morphology. Nematode species identification can be obtained through a molecular assay at a diagnostic lab but must be requested when a sample is submitted. When requesting a molecular assay, include roots that have distinct root galls at sample submission.

Sampling is best conducted in the fall prior to Thanksgiving when nematode number are at their highest. It is valuable to know what nematode pressures are in a given field to select the proper management tools.

Exclusion and Sanitation. Nematodes can be moved in soil on equipment, vehicles, or shoes that have entered the field. Equipment from nematode-infested fields should be sanitized before moving to unaffected fields. Workers should also sanitize shoes between working in nematode-affected fields.

This factsheet was originally prepared by the NCSU Field Crops and Tobacco Pathology Lab in 2020.