Saltwater intrusion is the invasion of coastal soils by salt water from oceans and sounds. Salts are attracted to the soil particles and accumulate in the soil, causing toxicity to nonadapted plants. Excessive salt may also cause clay dispersion and surface sealing, impeding soil drainage. In North Carolina, the main salinization mechanisms are storm surge events, wind-driven flooding through ditch and canal networks, sea level rise, and horizontal saltwater movement through the subsoil.

Skip to Measuring Salinity in Salt-Affected Wells and Soils

Researchers recently studied the effects of saltwater on soil, creeks, and wells in and along North Carolina agricultural fields in the coastal counties of Hyde, Pasquotank, and Camden (Figure 1). Well clusters and nearby creeks were used to determine vertical and horizontal variability in salinity of the water. Figure 2 provides data, presented in five graphs, obtained from the Hyde County location. The salinity in the creek (Figure 2A) was highly variable—from 0 to 20 parts per thousand (ppt)—during a seven-month period. The salinity of the water in both well clusters was constant over the same period (Figure 2B, C, D, and E) but higher than the maximum salinity recommended by Brouwer et al. (1985) for irrigation water (2 ppt), represented by dotted lines in Figure 2. In well HCO1, salinity was higher at greater depth (9 feet) (Figure 2C) than at shallower depth (3 feet) (Figure 2B); the reverse was measured in well HCO3 (Figure 2D and E). Thus, salinity in the well water varied by depth and location, even when the wells were located relatively close to one another (Figure 3). Elevated salinity levels in the shallow groundwater indicate the potential for salts to negatively affect the crop performance in this location. The elevated salinity also indicates that it will be difficult to flush the excess salts from the soil profile.

Figure 4 shows a soil map of a Hyde County field affected by salts. The top of the chart is the soil surface and goes to a depth of 26 feet; the blue colors may indicate the influence of salts. The figure shows how variable the salt intrusion into a field may be. The field was 2 feet above sea level and nearly flat. Any elevation changes were in inches. 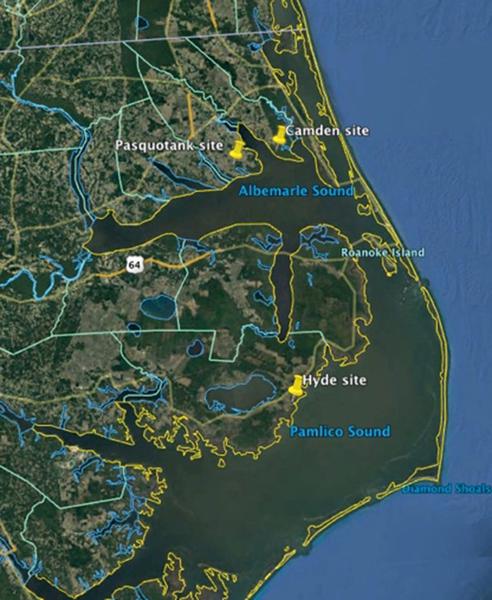 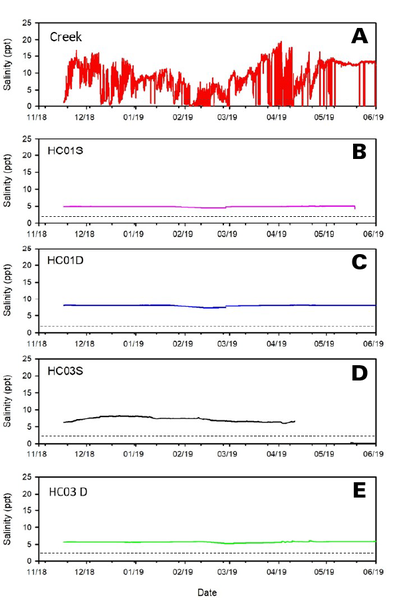 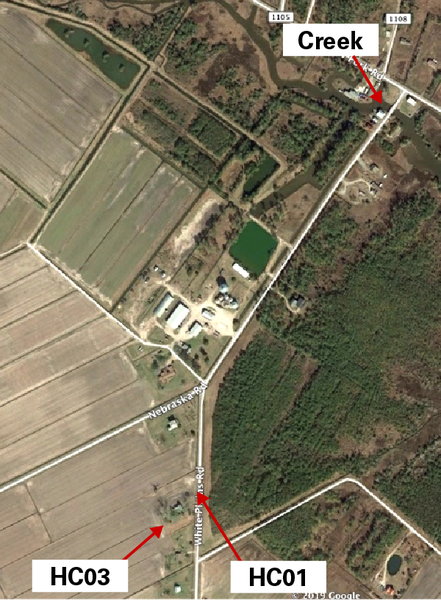 Figure 3. Locations of Middletown Creek and two wells where salinity was measured in Hyde County, NC.

Figure 3. Locations of Middletown Creek and two wells where salinity was measured in Hyde County, NC. 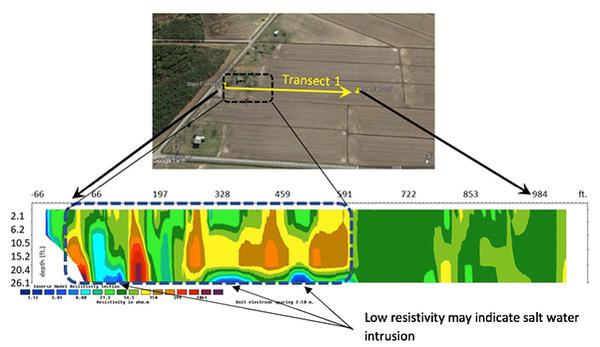 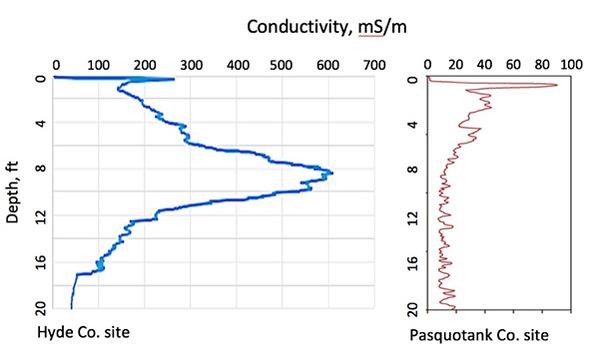 Figure 5. Conductivity in the soil profile at two sites in North Carolina.

Figure 5. Conductivity in the soil profile at two sites in North Carolina.

Skip to Identification and Potential Remediation Options for Salt-Affected Soils

Good soil sampling techniques can help determine the cause of decreased productivity in a field (see the NC State Extension SoilFacts publication Effects of Wind-Induced Sodium Salts on Soils in Coastal Agricultural Fields. Collect and analyze separate soil samples from the salt-affected area and from a nearby nonaffected area, then compare the results from both areas. Because salt distribution within a field can be very patchy, pinpointing sampling locations is easiest when visible crop damage or differences in residue cover are still apparent. Crop damage varies with the intensity of salt exposure, but it resembles that caused by drought. Look for stunted growth, small and yellow leaves, death of leaf margins, and leaf drop.

In a soil test report, the exchangeable sodium percentage (ESP) and soluble salts index (SS-I) are of key interest because these parameters are used to diagnose salt-affected soils. In North Carolina, crop damage was observed in fields with ESP of 14 and SS-I of 53 to 120. The North Carolina Department of Agriculture & Consumer Services (NCDA&CS) Agronomic Division laboratory determines the SS-I when the samples are submitted as diagnostic (problem) samples rather than as routine samples. Soil analysis reports from prior years may help determine if a progression in sodium content is occurring at the site. Producers should monitor a field’s soil ESP and SS-I, salinity of irrigation water, and salinity of water in the ditches. North Carolina Cooperative Extension agents can use a producer’s data in recommending remediation solutions.

Apply gypsum: Gypsum applications have been used in the western desert states in response to salt accumulation from irrigation; applications have also been attempted in some eastern North Carolina fields after storm events. Theoretically, the calcium in the gypsum displaces the sodium closest to the soil particles—that sodium remains dissolved in the soil solution unless sufficient water movement flushes it from the soil profile. For gypsum treatment to be successful, there must be sufficient fresh water and adequate subsurface drainage. Without an efficient natural or artificial subsurface drainage system, the high water table and elevated groundwater sodium concentrations observed in some fields in the northeastern North Carolina counties often make the gypsum treatment less effective. If the salt-affected field has efficient water drainage, incorporating gypsum into the soil and then thoroughly saturating the field with fresh water prior to draining it can increase the chance of remediation.

Conduct deep tillage: Deep tillage has remediation potential in areas where surface crusts have formed but there is no accumulation of salts deeper into the soil profile. Tillage distributes and dilutes the salts, lessening their impact on the plants. Since salts will gradually be mixed deeper and deeper into the profile, deep tillage cannot be continually used unless salts are flushed entirely below the rooting zone.

Manage water aggressively: Dikes and floodgates (Figure 6) can reduce the risk of additional salt inputs to fields from storm surges. Managing water-control structures to retain rainfall on fields flushes the soil with freshwater and enhances the downward leaching of salts. Repeated cycles of freshwater flooding, drainage, and reflooding will maximize salt removal. 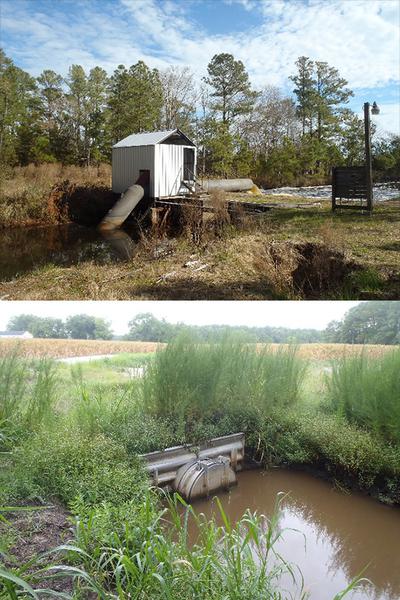