About 125 species of the beetle family Phalacridae in North America are called shining flower beetles. They breed in flowers and are thereby minor pests of flowering plants. The tiny adults are 1/32 to 3/32 inch long, and are dark, shining beetles that are sometimes quite common on goldenrod and other composites. They are oval to almost round in top view and strongly convex in side view. The antennae have eleven segments that end in a small club. These beetles readily drop from the flowers when disturbed. The tiny grubs of some species are oval in top view, somewhat flattened, and have a pair of tiny spurs at the rear. Shining flower beetle grubs have short antennae, well developed legs, and two to five simple eyes on each side of the head. Grubs of other species are four times longer than wide and grow to 3/16 inch long. The abdomen is distinctly segmented and the very short ninth segment has two, tiny, upturned spurs. They chew through flower buds and seeds as they molt and grow in flower heads. Even though the grubs bore through buds and even seed pods, they seem to feed only on plant juice. It is likely many shining flower beetles have one generation a year, timed to coincide with the flowering of their favorite composite. In fall, grubs fall from the plant and tunnel into the soil, where they spend the winter. They pupate the following spring or summer and new adults emerge to infest their host flowers. Many shining flower beetles are pollen-feeders, but others feed on fungi. The fungus-feeding shining flower beetles are even considered pests because they are associated with ergot, smuts, and molds. Shining flower beetles have been collected in June and July in North Carolina. 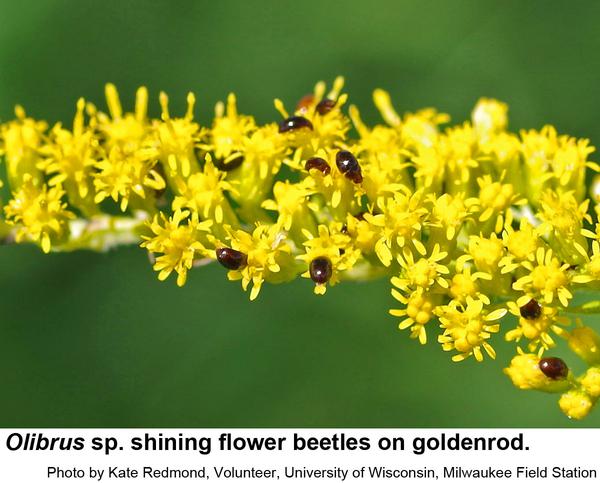 Shining flower beetles spend most of their development in flowers.

Shining flower beetles spend most of their development in flowers. 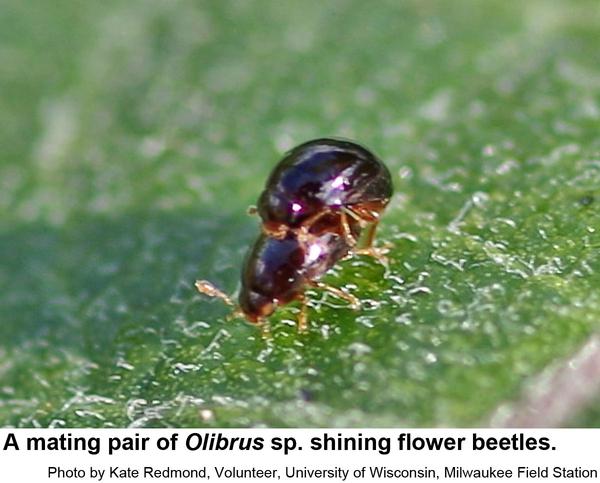 Shining flower beetles breed in flowers, especially composites such as goldenrod. These beetles have also been collected on holly foliage and Acacia flowers and seed pods. 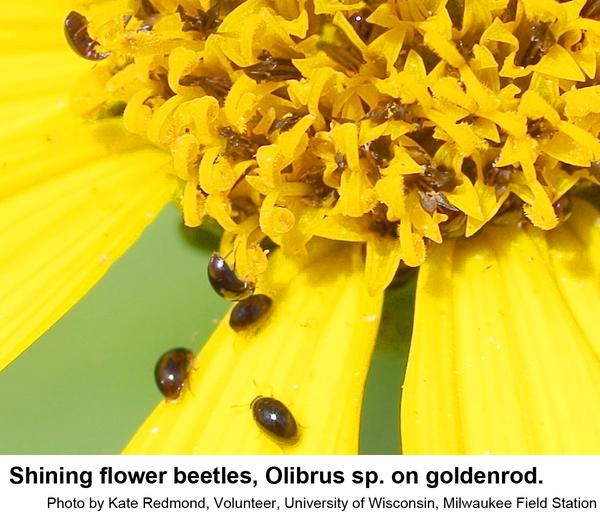 Sometimes shining flower beetles can be quite abundant on goldenrod.

Sometimes shining flower beetles can be quite abundant on goldenrod.

If the shining flower beetles become abundant enough to be considered pests, their control poses a problem because the flowers they infest are also visited by important pollinators. If one decides to spray, do so early in the morning or late in the evening to avoid killing bees (honey bees and native bees such as bumble bees, digger bees, sweat bees, etc.). Because fluvalinate is also labeled for mite control inside bee hives, it is likely that the dry spray residue of that pyrethroid is not particularly toxic to honey bees. Pyrethrum is a second choice for shining flower beetle suppression because it has such a short residual life after it dries on plants.