We obtained inventory estimates for bermudagrass, zoysiagrass, centipedegrass, St. Augustinegrass, tall fescue, and Kentucky bluegrass as well as a tall fescue and Kentucky bluegrass mix. These estimates were based on estimated sales and the availability of sod as being excellent (more than 10% of demand), adequate (equal to demand), or poor (more than 10% shortage).

Pricing information included the farm price as well as the price for truckload orders delivered to the closest urban market or within 100 miles of the farms. All costs were reported as price per square foot of sod.

Zoysiagrass is being grown by 16 (64%) of the surveyed producers, making it the second most popular turfgrass species grown by NC sod producers. Thirty-eight percent of these producers rated their inventory as adequate this year but none indicated it was excellent. For 2021, 63% of all zoysiagrass producers projected shortages, similar to 2020 estimates. Over the last five years, the percentage of producers projecting good inventory levels peaked in 2019 and has been declining since then (Figure 1).

Of the producers surveyed, 13 (52%) are growing centipedegrass. Sixty-two percent of these growers reported they had adequate to excellent inventory. Thirty-eight percent of all centipedegrass growers anticipate a shortage during 2021.

Seven (28%) of the surveyed producers are growing St. Augustinegrass. Fifty-seven percent of these growers reported they had adequate to excellent inventory, and 43% anticipated a shortage during 2021.

Of the producers surveyed, seven (28%) are growing tall fescue by itself. Seventy-one percent estimated they would have adequate to excellent inventory and 29 percent anticipated a shortage for 2021. Over each of the last five years, more than 70% of producers projected good inventory levels of tall fescue (Figure 1).

A mixture of tall fescue and Kentucky bluegrass is being grown by 11 (44%) of the surveyed producers. Ninety-one percent of these producers rated their inventory as adequate to excellent this year and 9% anticipated shortages.

Three producers surveyed (12%) reported growing Kentucky bluegrass by itself. Of the group that responded to this survey, 100% anticipated adequate to excellent supply during 2021. 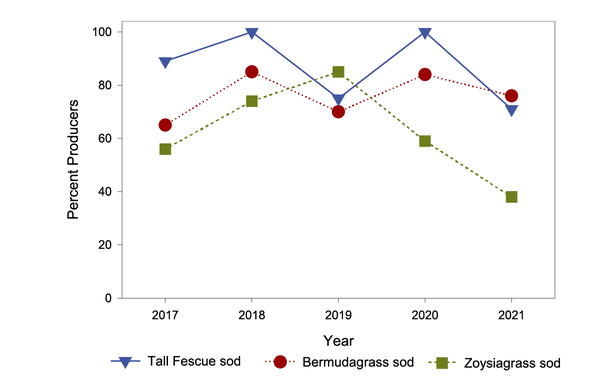 Figure 1. Percentage of bermudagrass, tall fescue, and zoysiagrass producers projecting adequate to excellent supply for the past five years.

Figure 1. Percentage of bermudagrass, tall fescue, and zoysiagrass producers projecting adequate to excellent supply for the past five years.

Table 1 provides a sod price perspective for all grass species in 2021.

In 2021, 48% of the surveyed growers reported that they grew some proprietary grasses on their farm. This is a 21% decrease compared to 2019. The average percentage of their grasses that were proprietary was 25% with a reported range from 4% to 75%.

In 2021, 48% of the growers surveyed grew some certified sod. This was a 25% decrease in what was reported in 2020. The average amount of certified grass reported by these farmers was 36% of their total sod acreage. Fifty percent of these producers charged more for certified grass—$0.02 to $0.10 more per square foot.

Delivery charges are based on a flat rate for 52% of respondents and a per mile basis for 48%. Freight rates per mile shipped to the closest urban market ranged from $3.50 to $5.00 per mile and averaged $4.20 per mile (a 10% increase from the previous year). Eight sod farms reported flat freight rates of $150 to $300 per shipment with a mean of $220 (a 14% decrease over the previous year), though these rates could vary depending on other factors such as distance from farm. Forty percent of the respondents indicated that freight prices are included in price quotes to customers whereas 60% invoiced freight separately.

Eighty-eight percent of respondents indicated they did not charge an unloading fee. Two sod producers charged a $75 unloading fee. Eighty-four percent of respondents indicated they make additional drops on loads. The low-end charge for additional drops on a load was $12 and the high-end charge was $150. The average cost for additional drops was $80. Several respondents reported that the charge was dependent on the distance between drops and that charges may be divided between buyers. Some also added a minimum drop fee (such as, $25) plus a mileage rate (for instance, $4.00/mile).

Sixteen percent of respondents indicated that they add a fuel surcharge. Relative fuel prices each year seem to influence this practice.

Twenty-five percent of respondents indicated they charged a convenience fee for credit card purchases. This is a 500% increase in adoption compared to 2020.

Skip to Sales by Industry Segment

Table 2 provides an indication of the industry segments where sod is sold. Surveyed producers estimated that landscape contractors (62%) constituted the largest segment. The next highest group was homeowners at 16%, followed by golf courses and sports/athletics with 8.2% and 6%, respectively. Retail garden centers were at 5.3% and brokers at 2.1%. The largest changes compared to previous years are the increase in direct homeowner sales and a slight uptick in sales to golf courses.

Skip to Acreage in Production

Several questions related to employee numbers and sod sales were added to this year’s survey for the fourth year. These data were collected as a requirement for the North Carolina Department of Agriculture and Consumer Services grant that was awarded to NCSPA.

Total sod sales for the 16 operations that reported data ranged from $85,000 to $5.6 million. The average sod sales were $1.371 million (a 52% reduction from the previous year’s values). Total sod sales reported were $21,936,300. Fifty percent of the producers indicated their sales increased in 2020, whereas 44% had a decrease and 6% reported sales stayed the same.

The last year saw the second year of growth in the sod industry following several years of reducing acreage due to poor sod sales. There were some changes in sod prices, with about half the turfgrass species having moderate increases and half with moderate reductions. These adjustments may be partially influenced by the large increases that were noted in 2020. North Carolina was impacted by eight tropical systems in 2020, but only hurricane Isaias came onshore as a strong storm. Remnants of other storms and heavy fall rainfall still had significant impacts on sod production and harvesting. The biggest question early last year was the impacts from the COVID-19 pandemic. Since landscaping and home construction were deemed essential, the impact seemed to be much less than many other industries. It seems a strong house construction market will continue to provide a great need for NC sod in 2021, which is important since the bulk of sod sales (>62%) are to landscape contractors. The total acreage of sod seems steady with a small amount of growth. Most grasses seem to be in good supply for 2021 with the exception of zoysiagrass.