Soil Health: What Does it Mean in North Carolina? SoilFacts

Soil health is defined as the capacity of soil to function as a vital living ecosystem (Doran and Zeiss 2000), where a healthy soil is believed to be highly productive, optimally functional, and naturally able to recover from disturbances (Doran and Parkin, 1994; Kibblewhite et al. 2008). Numerous research groups have developed or are trying to develop soil health tests (Rinot et al. 2018), but none is universally accepted.

Many North Carolina farmers already use these core practices. For example, a corn, wheat, soybean rotation with conservation tillage provides all four soil health practices. The ability to use these practices depends on the specifics of the cropping system, but in general, crop rotation and conservation tillage have been important management practices implemented throughout North Carolina for several decades.

Many farmers want to know the usefulness of soil health testing. The two most currently used tests in the United States are the Haney Soil Health Test (Haney) and the Cornell Comprehensive Assessment of Soil Health (Cornell). The Haney test measures carbon dioxide respiration from microbes in the soil as a soil health indicator in addition to nutrient testing (Haney et al. 2006). The test is provided by commercial labs for around $55 per sample. The Cornell test was developed by the Cornell University Soil Health Testing Laboratory and includes multiple physical, chemical, and biological indicators in its evaluation (Moebius et al. 2007). It costs $110 per sample. The Haney and Cornell soil health tests do analyze more soil properties than traditional soil tests. However, there is no confirmation that these assessments of soil health indicators will lead to recommendations to improve soil health for different soils.

North Carolina has three physiographic regions—coastal plain, piedmont, and mountains—and long-term agronomic trials have been conducted in each of these regions. The long-term coastal plain trial is in Goldsboro (20 years), the piedmont trial is in Reidsville (35 years), and the mountain trial is in Mills River (25 years) (Figure 1). Each trial has a unique management history, but two factors in particular were compared generally at Goldsboro (coastal plain) and Mills River (mountain). Those factors were tillage (no-till vs conventional tillage) and management (conventional vs organic management). At Reidsville (piedmont), researchers studied tillage intensity ranging from no-till to moldboard plowing (Table 1).

Figure 1. Map of long-term tillage and cropping trials located across North Carolina. To the left is Mills River in the mountains. In the center is Reidsville in the piedmont. To the right is Goldsboro in the coastal plain.

Figure 1. Map of long-term tillage and cropping trials located across North Carolina. To the left is Mills River in the mountains. In the center is Reidsville in the piedmont. To the right is Goldsboro in the coastal plain.

Measuring soil organic matter content or respiration are the two most common tests for evaluating soil health. There are, however, a variety of ways to conduct these tests. Loss-on-ignition (LOI) is the most frequently used way to measure soil organic matter. Soil is dried, weighed, put in a very hot oven, and weighed again. The loss in weight in the oven is considered to be the organic matter that has “burned up.” Carbon content can also be measured directly with a C:N analyzer, which can detect carbon dioxide released from burned soil. Another long-used method, Walkley-Black, uses strong oxidizing chemicals to burn up the carbon in soil organic matter. It is often assumed that carbon makes up 58 percent of the weight of organic matter, so a factor of 1.72 is used to convert the measured carbon to organic matter. Each method has some limitations, and converting results from one method to another is problematic.

Soil respiration is determined by measuring carbon dioxide gas (emissions from a soil sample over a period of one to four days). Most studies indicate that the longer the test is run, the more stable the measurement, and that these values will change based on the length of the test. Table 2 provides a comparison of results for various organic matter and respiration tests conducted using soils from the three long-term trials.

Crop yield and growth are not considered in soil health tests. Nevertheless, due to the long-term nature of these agronomic trials, we were able to review yield differences based on treatments for many years.

Figure 2 shows changes in soybean yield along with associated rainfall at Reidsville over time. There were treatment differences in 1990, 2000, 2008, 2010, 2012, and 2014, but the pattern of these differences was not the same over years. Some years, no-till had the greatest yield, whereas other years in-row subsoiling had the greatest yield. Some years, moldboard plowing produced very low yields, but sometimes the yields were equivalent to no-till yields. Average soybean yield over time was about 38 bu ac-1 for all treatments combined, with no-till averaging 42 bu ac-1 and moldboard averaging 29 bu ac-1. Soybean yield from moldboard plowing was statistically less than no-till, chisel plow spring, and in-row subsoiling treatments when average yields over all years were considered.

Corn yields showed similar variation and trends to soybean yields at Reidsville (Figure 3). There were differences in treatments in 1987, 1988, 1989, 1993, 1997, 2007, and 2011. Overall yields were around 95 bu ac-1. The no-till treatment yielded more corn than chisel plow + disk, spring and moldboard plow, spring. Sweet corn yields at Mills River were greater for the conventionally managed treatments. Organic yields at Mills River were lower regardless of tillage, which was most likely due to weed pressure. Corn yields at Goldsboro averaged around 95 bu ac-1, and did not vary by treatment or year. 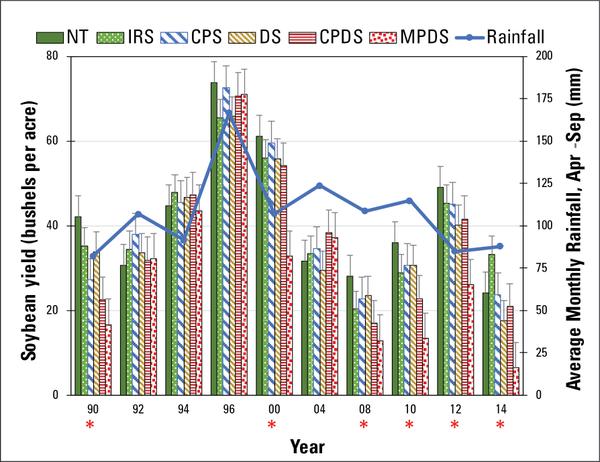 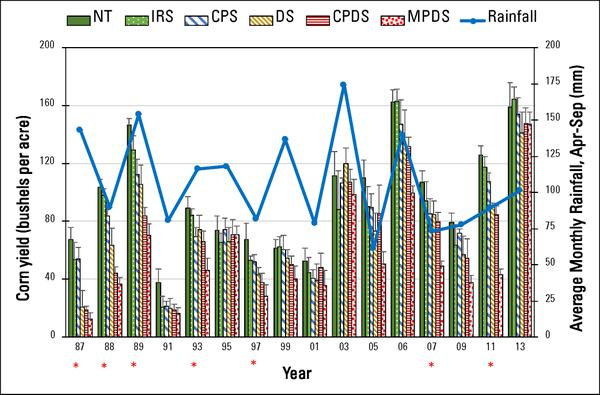 After comparing the Haney and Cornell soil health tests on three long-term trials, we saw very few differences in treatments for the measured properties. The Haney soil health ratings were mostly high, while the Cornell ratings were mostly low. We found no consistent relationship among soil health ratings, soil management, and crop yields. The one soil with better soil health as measured by the Cornell test was the organic management no-till treatment, yet sweet corn yield from that treatment was lower than the yields from all other treatments.

We recommend that farmers continue to manage for soil health and yield by:

Due to the uncertainty surrounding the soil health measurements we observed, we have found that currently available tests may not provide a consistent means for evaluating progress on soil health management.

Skip to Acknowledgement and References

We thank the North Carolina Soybean Producers Association and the Environmental Defense Fund for funding the research discussed in this factsheet.