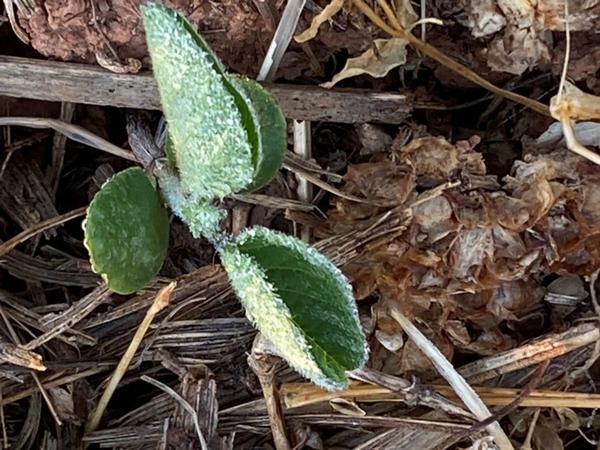 The first opportunity for cold injury in emerging soybeans is through imbibitional chilling. Soybeans begin the emergence process by absorbing 50% of their seed weight in water. If soil temperatures are running below 50℉ and a cold rain occurs within 24-48 hours after planting, imbibitional chilling can occur, resulting in stand loss.

Soybean above-ground tissue death can occur with prolonged conditions under 28℉. Damage can occur from temperatures ranging from 28-36℉ depending on other factors including growth stage, soil surface residues, soil moisture, and field topography. Cold temperatures can lead to foliage chlorosis and necrosis. Plants can appear wilted. These symptoms can be easily confused with other early season seedling issues, such as seedling diseases and herbicide damage, which may be synergized by cold conditions. Severe cold conditions (28℉ for >4 hrs) can lead to tissue death. Soybeans are most sensitive to early season cold injury in the crook stage, when the hypocotyl arch is pulling the cotyledons through the soil and when the unifoliate tissue has become exposed above the cotyledons. Before the unifoliate tissue is exposed and is still protected by the cotyledons, the cotyledons serve as a buffer against cold conditions due to their high water content.

Soybean above-ground tissue death can occur with prolonged conditions under 28℉. Prolonged temperatures under 30℉ can damage stems, pods, and seeds. Foliage damage can occur from temperatures ranging from 28-36℉. Once the soybean plant reaches growth stage R7 (beginning maturity), the plant can generally withstand a frost with minimal damage. Some soybeans damaged at R6 (full seed) can also survive with minimal damage. The soybean plant is most susceptible to a late season frost at the R5 (beginning seed) growth stage. Cold damage often only impacts the upper soybean canopy, allowing pod and seed maturation to continue largely unaffected. However, subsequent cold events will penetrate deeper into the canopy. If cold damage occurs when the seeds are green and still developing, it can slow down the drying process and increase chances of shatter. Late season frost can result in delayed maturity and seeds remaining discolored and green. 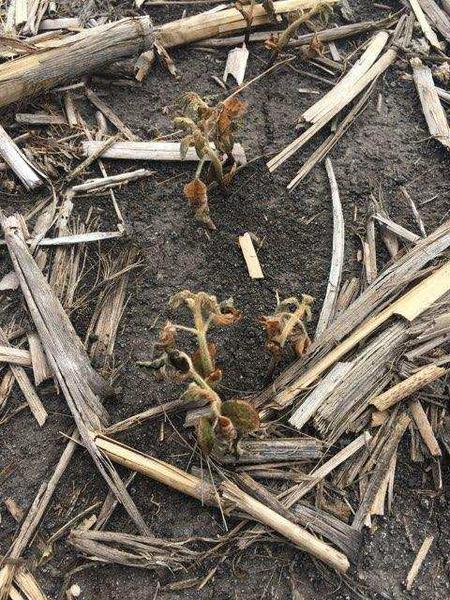 A producer should wait 3-5 days after the frost/freeze event to assess soybean stand. That provides the soybean plant with time to recover. Once the producer has waited several days, soybean stand should be accurately assessed before making decisions about soybean replanting. The producer should look for healthy new tissue emerging from the apical meristem to count that plant in the final remaining population. In North Carolina, we might occasionally see cold injury in soybeans planted in early May or prior. Growers can expect to get 100% maximum yield potential at 75,000 plants/A for May planted soybeans (Figure 1).

Narrow rows and adequate populations may help protect the soybean canopy from late season cold events. Combine adjustments should be made for damaged soybeans which may retain moisture at a higher level. If a producer has the ability, harvesting soybean at a higher moisture and drying them can allow for a faster harvest and protect seed quality when dry down is slowed due to a freeze/frost event. Soybeans being produced for seed use the following year may have quality impacts from a late freeze event and caution should be exercised examining seed for quality declines. 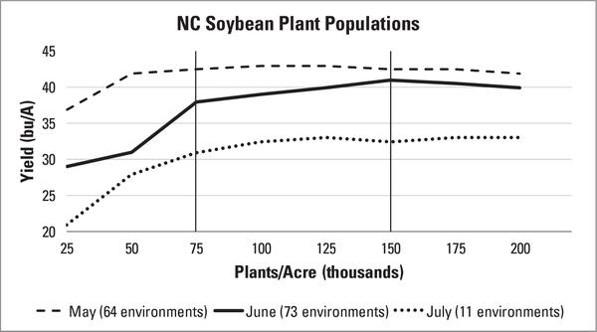 Chilling Injury in Corn and Soybeans (University of Nebraska - Lincoln)