In the United States, the vast majority of meat birds (for example, chickens, and turkeys) and their breeding stock, as well as some egg-layers, are raised on bedding like wood shavings and sawdust. The bedding collects manure, spilled feed, water, and feathers — and the resulting waste is known as poultry litter. The same litter is generally used to grow several flocks of birds, though after each flock, a portion of the wet, feces-rich material beneath the feeders and drinkers, known as cake, may be removed. Periodically, the litter in a house is replaced with fresh bedding; duration between complete litter cleanout will depend on the type of bird and management protocol. By contrast, most egg-layer facilities in the United States do not use bedding; therefore, their waste is a combination of manure with some spilled feed, water, and feathers. In high-rise layer houses, the waste may collect beneath the cages where the birds are housed for up to one year before cleanout. In caged-layer houses with manure-belt or scrapers, the waste may be removed twice weekly or even more frequently.

Poultry waste is high in nutrients. Crouse et al. (2019) reported that 1 ton of broiler litter contains, on average, 57.8 lb of nitrogen (N), 40 lb of phosphate (P2O5), and 48.6 lb of potash (K2O). Hence, the vast majority of poultry waste produced in the United States is used as fertilizer (directly or as compost) on cropland, hayfields, and pastures, with a small proportion burned or digested to produce energy. Solid poultry waste is commonly land-applied using twin-disc spinner spreaders that may be truck-mounted or pulled by a tractor. In twin-disc spinner spreaders, a moving bed chain (conveyor) moves litter to the rear of the machine and drops it on a pair of spinner discs rotating in opposite directions. Due to the resulting centrifugal force, poultry waste is distributed in a wide swath behind the machine. Because of its higher field capacity (acres/hour), the twin-disc spinner spreader has largely replaced the rear-discharge spreader for poultry litter application. Hence, this fact sheet is solely focused on calibration of spreaders with two spinners for application of solid poultry waste, including litter and manure. The terms litter and waste are used interchangeably in this document. 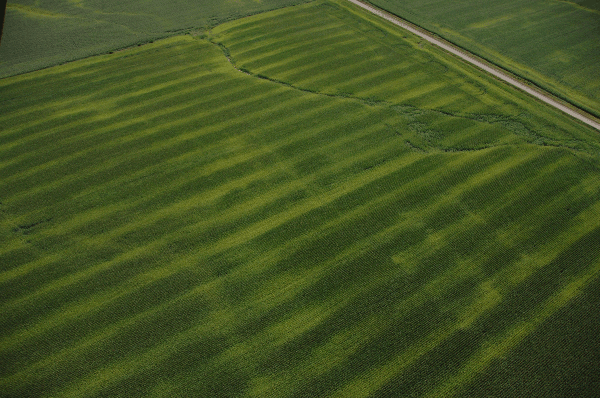 Skip to Swath and Spread Patterns

Figure 3 shows three spread patterns that range in quality from best (flat-top) to acceptable (pyramid) (Stewart and Bandel 2002). The effective swath width is the portion of the total swath width that receives at least 50% of the application rate (Figure 3). The flat-top pattern provides uniform application while maximizing swath spacing, which minimizes application time. The oval pattern provides uniform distribution in the middle, but application drops off sharply on the sides, unlike the flat-top or pyramid patterns (Figure 3). Therefore, it is more difficult to accurately determine the effective swath width of a spreader with an oval spread pattern. The pyramid pattern (Figure 3) is also acceptable and, unlike the oval pattern, more forgiving, since the effective swath can be identified more accurately than in an oval pattern.

However, because the pyramid pattern has a smaller effective swath width as compared to a flat-top spread pattern, the number of passes needed to cover the same area is greater, increasing the time needed for application. For example, as shown in Figure 4, with the same total swath width of 50 feet, the pyramid and flat-top patterns have effective swath widths of 25 feet and 38 feet, respectively. Therefore, the spreader with a pyramid pattern will spend 50% more time covering the same acreage as the flat-top spreader to achieve the same uniformity of application.

In addition, there are two poor spread patterns, the “M” and “W” patterns (Figure 5). While machine adjustments (see Troubleshooting and General Comments) can improve these spread patterns, simply changing the swath spacing will not improve uniformity of litter application. Applying half of the litter using a north-south transverse and the other half using an east-west transverse can improve uniformity, but this will increase application time.

Unlike dry synthetic fertilizer or even properly composted material, poultry litter is not consistent in size—it is lumpy. Consequently, obtaining symmetrical distribution on both sides of the swath is rare. Therefore, the producers will need to use their own judgment to identify the type of spread pattern and the effective swath width. 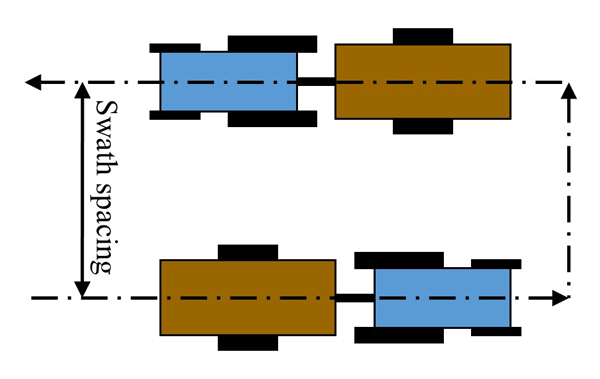 Figure 2. Illustration of swath spacing. The spreader is pulled by a tractor.

Figure 2. Illustration of swath spacing. The spreader is pulled by a tractor.

Figure 3. Three different types of acceptable or better spread patterns with litter spreaders (modified from Stewart and Bandel 2002). Not to scale.

Figure 3. Three different types of acceptable or better spread patterns with litter spreaders (modified from Stewart and Bandel 2002). Not to scale.

Figure 4. Comparison of swath spacing of two hypothetical spreaders, one with a pyramid spread pattern and the other with flat-top spread pattern. Not to scale.

Figure 4. Comparison of swath spacing of two hypothetical spreaders, one with a pyramid spread pattern and the other with flat-top spread pattern. Not to scale.

The American Society of Agricultural and Biological Engineers (ASABE) has no standard for calibrating litter (or manure) spreaders, though it has a standard for fertilizer spreaders, “Procedure for Measuring Distribution Uniformity and Calibrating Granular Broadcast Spreaders” (ASAE 341.5 May 2018). While such a standard could be used by a spreader manufacturer to test its product or by an unbiased organization to compare different makes and types of spreaders, producers or Extension personnel would find it difficult to follow the strict criteria outlined in the ASABE Standard to calibrate spreaders. For example, the pans required in the ASABE Standard to determine application uniformity would have to be custom-made. While we consulted the ASABE Standard in developing the procedure described here, we propose simplifications to facilitate spreader calibration.

The following supplies are needed for calibration.

The pans can be large, disposable aluminum baking pans (21 in. × 13 in. × 3 in.). A pack of 20 pans can be purchased for about $50 and can be reused. Fold down the ½ inch-wide rim to prevent litter collecting on the edges. When calibrating tractor-drawn spreaders, the pan should not be more than 4 inches deep; otherwise, the tractor drawbar may overturn or damage the pan. The 40-foot-long tarp will be sufficient to cover the effective swath width and the 20-foot width will give more representative results than a narrower tarp; a medium duty 40-foot × 20-foot tarp can be purchased for about $60. Small and large digital scales can be purchased for less than $40 each. The tape measure and stopwatch (or smartphone) will be required if the tractor pulling the spreader lacks a speedometer. 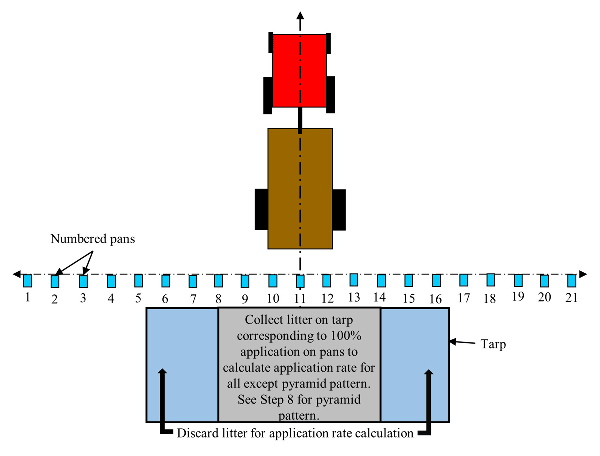 Figure 6. Layout of pans and tarp during spreader calibration. Not to scale.

Figure 6. Layout of pans and tarp during spreader calibration. Not to scale. 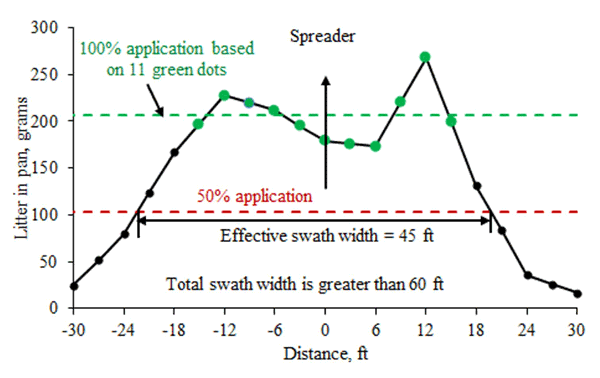 Figure 7. Distribution of litter in pans. Weight in each pan is the total over five passes.

Figure 7. Distribution of litter in pans. Weight in each pan is the total over five passes.

Skip to Troubleshooting and General Comments 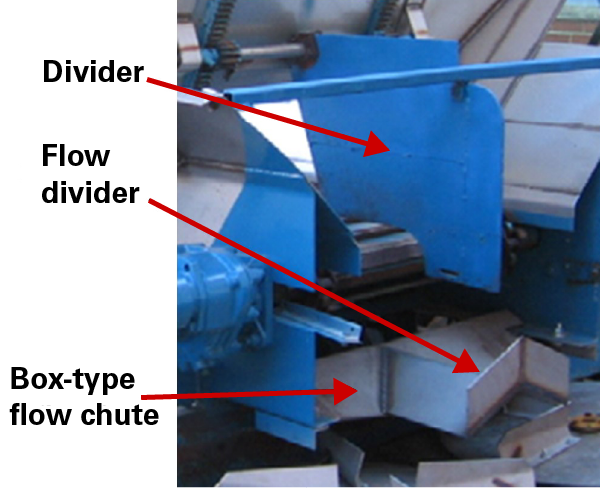