Spring cankerworm moths, Paleacrita vernata, emerge in late winter, usually during warm spells in February or March. The females lack wings and are usually mottled with gray or brown with a darker stripe down the back. The wings of males are brownish-grey with three dark, irregular stripes across the forewings. The eggs are tiny and oval and laid in irregular masses of about 50 eggs under flakes of bark or in bark cracks and crevices. Adult males may be attracted to lights. After hatching, spring cankerworms grow 3/4 to 1 inch long and are green to reddish brown with a single yellowish strip on each side. Spring cankerworms have only two pairs of fleshy prolegs on each side at the end of the abdomen. The eggs hatch at about the time of bud break, and the young larvae begin feeding on the new foliage. Young larvae chew small irregular holes in young leaves or skeletonize leaves. As they mature, the larvae begin eating larger irregular holes and finally entire leaves except for the major leaf veins. Feeding continues for approximately 6 weeks. The larvae mature from late June to early July when they spin to the ground on silk threads. The larvae then burrow into the ground to a depth of one to four inches, spin a silken cocoon and pupate. The pupae remain in the soil until the next late winter or very early spring. 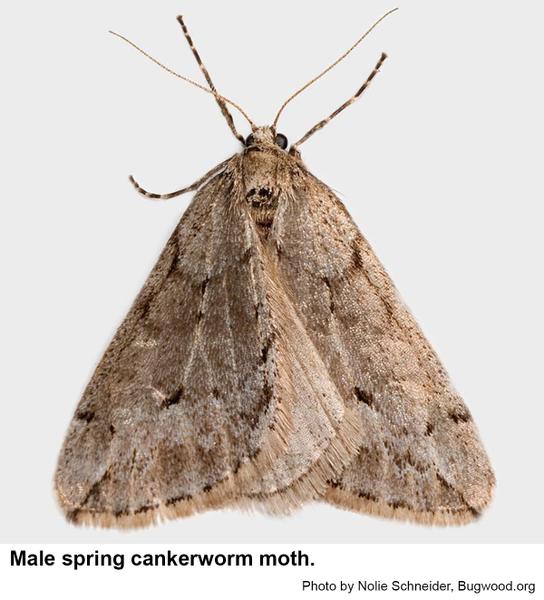 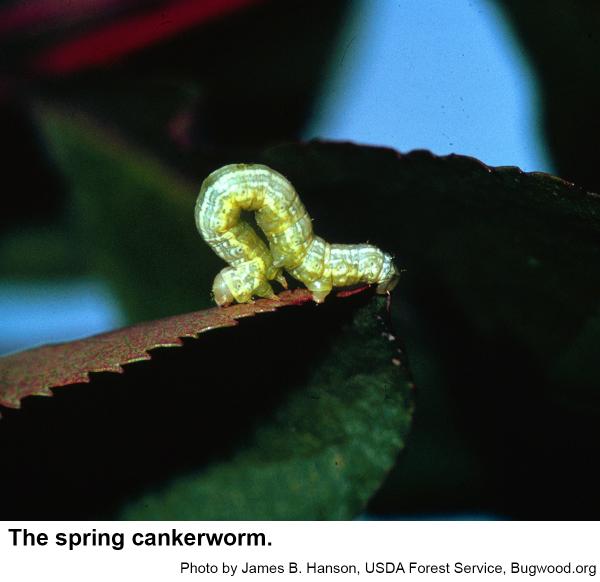 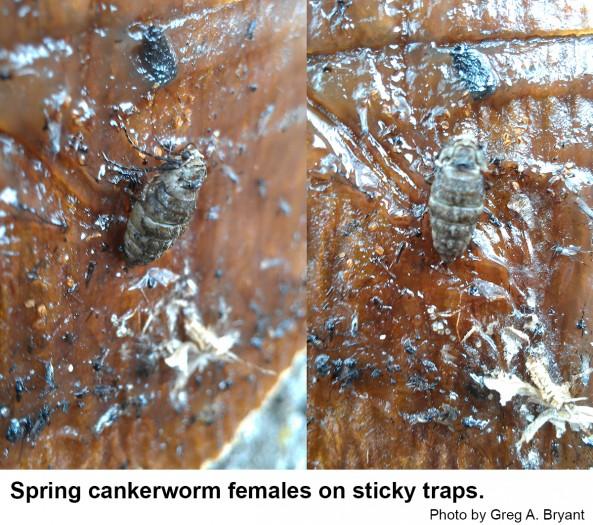 Spring cankerworms feed on a wide variety of trees including apple, ash, beech, elm, hickory, linden, maples and oaks. Spring cankerworm larvae feed from late April to mid-June. Damage is usually first noticable in late May. Three or more consecutive years of severe defoliation may cause many of the upper branches to die. Severe defoliation may contribute to tree mortality. Outbreaks sometimes last 4 years or more, and trees may be completely defoliated. Most trees usually leaf out again in 3 to 5 weeks. When cankerworm populations are large, frass rains down from infested trees and larvae drop down on silken threads onto people, cars and picnic tables, so spring cankerworms can be a real nuisance around homes and parks.

Trees can be banded with sticky material to prevent females from climbing up to lay eggs. Tree bands usually entail wrapping a narrow band of cotton batting or fiberglass insulation around a tree trunk then wrapping this material in plastic or tape. Apply sticky material like Tanglefoot to the plastic to catch female moths as they climb. The batting helps fill bark grooves to prevent moths from getting under the band. These traps should be installed after leaf fall and just after the first hard freeze. They should be checked periodically because the bands may become covered with moths or debris. Later moths will crawl over the bodies of their unfortunate comrades and will continue up the tree to lay their eggs. Thus with heavy populations, the moths may need to be scraped off from time to time and additional sticky product added to the plastic strips. In some cases entire cities or neighborhoods may band all susceptible trees in an attempt to reduce tree defoliation. The large scale benefits of this have not been established but the bands are certainly useful for monitoring to identify heavily infested areas.

Once caterpillars begin feeding in spring insecticides, such as those containing Beauveria bassiana, can be used to reduce their abundance and defoliation. Caterpillars only feed for 6 weeks so unless they are treated soon after hatching the benefits, in terms of reducing defoliation, will be minimal.

Several natural agents usually control cankerworm populations. Parasitic insects attack cankerworm eggs, larvae, and pupae. Other predators (insects, spiders, birds, and small rodents) attack all the stages. Cold winter temperatures, late spring frosts, starvation, or disease may also cause the collapse of larval populations. Most controls are directed towards trapping the wingless females before they can climb trees to lay eggs, or spraying the active larvae after they start feeding on the tree leaves. Horticultural oil sprays are effective against the eggs, but eggs must be thoroughly wetted for good control. Bacillus thuringiensis (Bt) based pesticides control young cankerworm larvae. Other insecticides are labeled and are most efffective when applied after all the eggs have hatched and the larvae are still small. Tree banding in November and December can be an effective way to block wingless females from crawling to the tops of trees to lay eggs. Traps should be in place about mid-November through January. A sticky agent such as Tanglefoot™ should be applied to a band around the tree, rather than the bark. Try the following steps:

Step 1: Install a strip of batting or insulation around the tree a few feet above ground level and below all limbs.

Step 2: Position a band of tar paper or roofing felt 6-12 inches wide, around the trunk circumference covering the batting. Short staples may be used for this. Do not use nails. Electrical tape might be used for small smooth-barked trees.

Step 3: Apply the Tanglefoot or sticky material in a band several inches wide onto the tar paper. Wear disposable gloves for easy clean up. Bands must remain sticky and clear of excessive debris, and may need to be "refreshed" periodically.