Squash bees (Peponapis pruinosa) occur throughout much of the United States and Mexico, where they are important pollinators of plants in the genus Cucurbita. This includes summer squash, winter squash, zucchini, pumpkins, and many gourds (but not cucumbers). Indeed, squash bees are most easily recognized by their behavior of visiting these flowers starting around sunrise, before other bees are active.

Squash bees could be confused with honey bees, which they resemble in general size and coloration. In comparison, however, squash bees are larger, bulkier and have longer antennae and rounder faces. In females, the hind legs are another distinguishing feature. Worker honey bees have smooth, flat hind legs onto which they pack compact balls of pollen, while female squash bees have very fuzzy hind legs which may be covered all over in loose pollen.

Male and female squash bees can be distinguished by the presence of extensive fuzzy, pollen-carrying hairs on the hind legs of the female (males do not carry pollen), and a yellow spot on the face of the male (females’ faces are entirely dark). 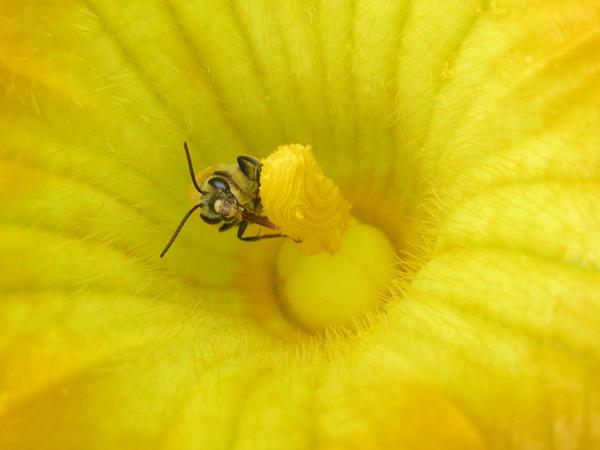 Male squash bee in a pumpkin flower. The yellow spot on the face identifies this bee as a male.

Male squash bee in a pumpkin flower. The yellow spot on the face identifies this bee as a male.

Comparison of squash bees and honey bees. Note the larger size and bulkier build of the squash bees.

Comparison of squash bees and honey bees. Note the larger size and bulkier build of the squash bees.

Squash bees, like most of our native bees, are solitary, ground-nesting bees. This means that they do not live in a hive or colony like the more familiar honey bees and bumble bees. Instead, each female squash bee digs her own nest in the soil and collects pollen and nectar to feed her own offspring. In North Carolina, adults are active in mid summer (June to August). Throughout the rest of the year, squash bees are present underground, developing within the nest cells constructed by the mother bee.

Squash bees gather pollen exclusively from plants in the genus Cucurbita. These flowers open near dawn, and squash bees begin foraging around the same time. They continue visiting the flowers until they wilt around mid day. It takes only 6 to 10 squash-bee visits to fully pollinate a female squash flower. Squash bees can typically pollinate a plant (or a field of plants) before other bees have even begun foraging for the day. Although honey bees and bumble bees can be effective pollinators for squash, they are superfluous in the presence of squash bees.

Squash yield is entirely dependent on insect pollinators, because male and female reproductive parts are housed in separate flowers. The pollen is heavy and can’t be dispersed by wind. By some estimates, squash bees alone may pollinate around two-thirds of the commercially grown squash in the United States. They are also regular visitors to suburban vegetable gardens.

This female flower won't develop into a pumpkin unless an insect visitor leaves behind some pollen to fertilize it.

This female flower won't develop into a pumpkin unless an insect visitor leaves behind some pollen to fertilize it. 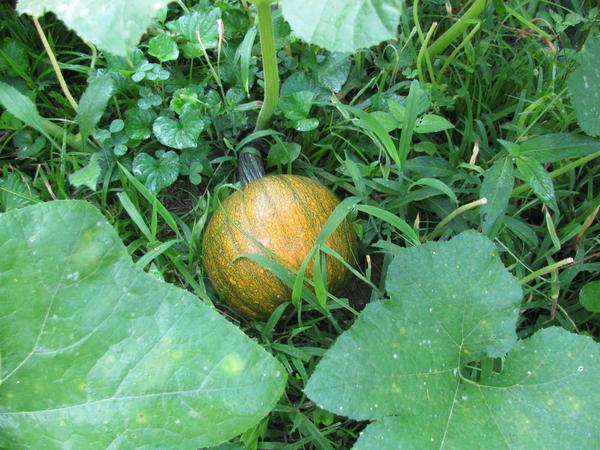 Up to 2/3 of the pumpkins, gourds, and squash grown in the US may be pollinated by squash bees.

Up to 2/3 of the pumpkins, gourds, and squash grown in the US may be pollinated by squash bees.

Because squash bees nest in the ground, often right under the squash plants, they may be sensitive to soil disturbance. The female bees usually build their nest cells 6 to 12 inches underground, and the next generation of bees spends most of the year sealed inside those cells.

Tilling a squash bed at any time of year has the potential to destroy squash bees. A census of 25 squash and pumpkin farms in Maryland, Virginia, and West Virginia found three times more squash bees on no-till farms than on those that tilled. However, a second study, in 20 pumpkin farms in Maryland and Virginia, found no such effect and suggested that bees may disperse from safe sites to tilled sites by the time pumpkins bloom, relatively late in the season.

Other soil treatments may also affect squash bees. One study found that the bees were more common on irrigated farms, perhaps because moist soils are easier for squash bees to excavate during nest construction. Another study found that squash bees can dig through a modest, 2-inch layer of mulch to make their nests, although this was based on a limited sample of 4 nests.

Finally, to conserve squash bees, be aware of pesticides in the garden. Squash plants get some pests—such as cucumber beetles and squash vine borers—that may require intervention. If you treat a flowering squash plant with insecticide, proceed with caution; some insecticides should not be used at all in this situation, and others only in the evening when bees are not active. Also bear in mind that systemic insecticides applied before flowering can still be present at toxic levels in squash pollen. (The North Carolina Agricultural Chemicals Manual does not list any systemic insecticides for control of squash pests in home gardens.) As always, check the pesticide label for any pollinator-specific warnings, and follow all label directions.

The immature bees in underground nest cells can be exposed to chemicals that are applied to the soil at any time of year, although no research has yet found a link between pesticide use and squash bee abundance on commercial farms.

Skip to Sources and Further Reading

Slide show from the USDA about squash bees as pollinators

Dively, GP, and A Kamel. 2012. Insecticide residues in pollen and nectar of a cucurbit crop and their potential exposure to pollinators. Journal of Agricultural and Food Chemistry, 60:4449-4456.

Splawski, CE, et al. 2014. Mulch effects on floral resources and fruit production of squash, and on pollination and nesting by squash bees. HortTechnology 24:535-545.

Stoner KA, and BD Eitzer. 2012. Movement of soil-applied imidacloprid and thiamethoxam into nectar and pollen of squash (Cucurbita pepo). PLoS ONE 7:e39114.