Success of Women in Agritourism: She Will Get What She Wants

Agritourism is any educational or recreational activity that takes place on a working farm (Rozier Rich et al. 2012), such as u-pick and orchard tours. The growth of this agricultural activity has been driven by two factors—farmers’ need to increase their incomes and consumers’ desire to connect with local farmers (Xu et al. 2014).

Women have a leading role in agritourism development, which will likely increase due to women’s expanding involvement in agriculture (Hoppe and Korb 2013). Yet evidence indicates that women in agritourism earn less than men (Barbieri and Mshenga 2008), most likely because women face unique challenges in agricultural careers (Halim et al. 2017).

Examining the whole picture of women’s success, including the factors challenging and facilitating such success, is important to maximize the benefits agritourism delivers to farms (for example, increased profits) and to rural communities (for example, economic revitalization of surrounding areas). With such a purpose, we surveyed 180 women in agriculture across North Carolina in 2017 (Figure 1)[1].

[1] In total, 236 farms in North Carolina were invited to participate in a survey conducted between January and April, 2017, which yielded 180 usable responses. The survey queried participants on sociodemographic characteristics, indicators of success, and societal trends and challenges. Data were analyzed using a combination of descriptive, reliability, and inferential statistical tests (p < 0.05), including exploratory factor analysis, Cronbach’s alphas, and multiple linear regressions.

Responding women were on average 49 years old; most held at least a four-year college degree (68%). Most worked full-time on the farm (61%), either exclusively or in addition to an off-farm job. The survey captured a diversity of farms in terms of agricultural production and agritourism offerings (Figure 2).

As for farm family characteristics, most respondents were first-generation farmers (61%) and felt settled in their communities (65%); a large proportion was interested in passing the farm to the next generation in the family (44%). Overall, these results indicate that respondents’ farm families had a strong connection to agriculture. 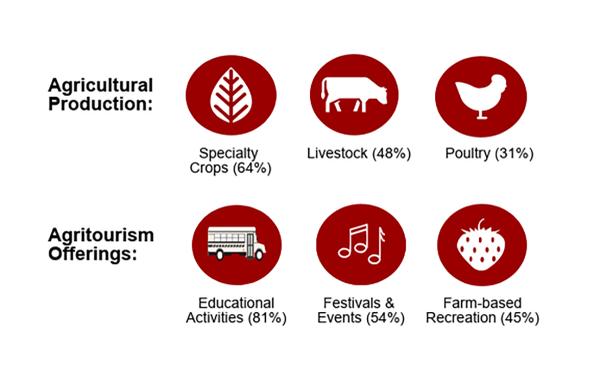 Women's Success in Their Various Roles as Agritourism Farmers

Skip to Women's Success in Their Various Roles as Agritourism Farmers

Due to the complex nature of agriculture, farmers also act as entrepreneurs and stewards in their community, in addition to fulfilling their personal responsibilities. Overall, the women farmers felt their personal responsibilities and their role as stewards were important to their success; they also felt moderately successful as farmers and entrepreneurs (Figure 3).

Skip to Challenges: Limitations to Success

The women farmers indicated that several factors affected their overall success (Figure 4). Most felt that maintaining farm quality (such as managing the number of visitors) and dealing with the uncertainty of agritourism (such as unclear regulations) challenge the success of their agritourism operations.

Most respondents also identified several factors that challenged their success as women farmers (Figure 4). The greatest burden came from their household responsibilities, especially balancing farm and family tasks and meeting expectations as caregivers. The context of the farming system also challenges the success of women farmers, mainly because they need to manage off and on farm work and shoulder the physical demands of farm work that they face.

Women farmers recognized several trends that facilitate their success in agritourism (Figure 5). Public awareness of agriculture was seen as the most influential trend supporting women farmers’ success. In addition, most respondents reported that the following trends had very much led to their success—increased demand for local farm products (75%), access to social media (73%), and the growing interest in local agriculture (69%).

To a lesser extent the changing demographics of farmers was also seen as conducive to women farmers’ success. Most respondents also greatly credited their success to these trends—the entrepreneurial mindset of young farmers (60%), overall women’s involvement in agriculture (59%), and women’s leadership in agritourism (58%). 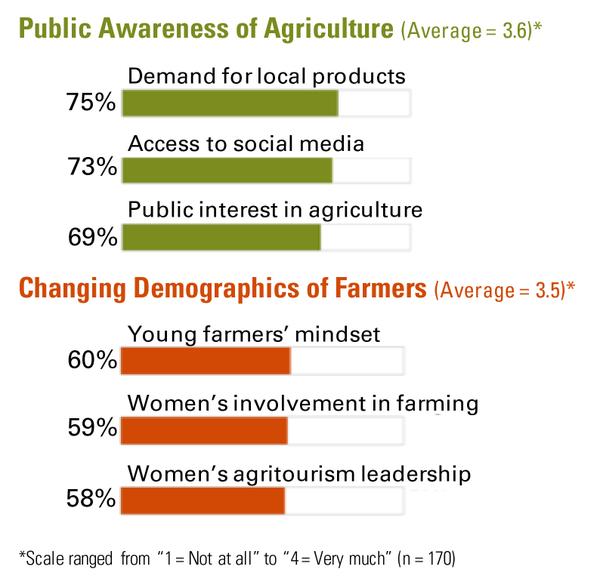 Skip to Achieving Success: Four Steps Forward, One Step Back

A combination of factors appeared to influence the success of North Carolina women in agritourism: the respondents’ family connections to agriculture, agritourism challenges, societal challenges, and agricultural trends (Figure 6). [2]

The more women farmers were: (1) settled in their community, (2) challenged by agritourism uncertainty, (3) taking advantage of public awareness, and (4) recognizing the changing demographics of agriculture, the more successful they felt personally and as community stewards and farmers.

However, the more challenges women perceived from society, specifically due to the traditional agricultural system, the less successful they felt as farmers, entrepreneurs, and personally. 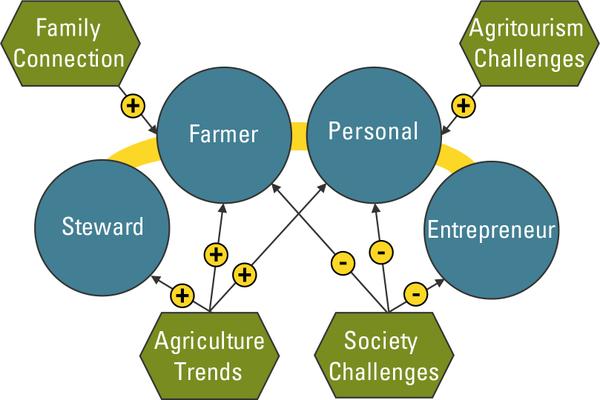 This study provided a holistic understanding of women farmers’ success beyond their personal realm and addressed their roles as farmers, entrepreneurs, and stewards of their communities. Women farmers’ perceived success in the roles of farmer and entrepreneur was less pronounced than in their personal and steward roles, mainly because of societal challenges. Hence, it is advisable to invest more effort into creating opportunities for women in farming (such as access to loans) and to foster networking platforms so they can share their accumulated knowledge and connections.

Success of women in agritourism is largely driven by their ability to convert challenges into opportunities, exemplifying that “she will get what she wants.” Therefore, outreach and policy efforts should prioritize assisting women in leveraging their connections with the community. These efforts also should assist women in capitalizing on agricultural trends, such as fostering public awareness of women farmers and rewarding entrepreneurship among young farmers. Consolidating the success of women in agritourism is not only important given women’s leading role in this industry, but also because of the many benefits this activity brings to farm families, rural communities, and society.

Our deepest gratitude goes to the women farmers across North Carolina who took the time to respond to the survey. We would also like to thank our reviewers for this publication: M. Farzana Halim, MS (Former Student, NC State University); Whitney Knollenberg, PhD (Assistant Professor, NC State University); and Tina Gross (co-owner, Gross Farms). Our appreciation also goes to the College of Natural Resources and the College of Agriculture and Life Sciences at NC State University for funding this project through the Deans’ Cross-College Enrichment Grant (2015–2017).