The sugarcane beetle, Euetheola rugiceps, is a black, hard-shelled beetle is dome-shaped and faintly ribbed, has strong legs with coarse spines, and is about a half inch long. When first deposited, the smooth, white egg is oval and about the size of a pinhead. Before it hatches, it gradually enlarges until it is spherical and about twice its original size. The grub grows to just over and inch long and is dirty white grub with a brick red head, pale brown legs, and a dark abdomen. The pupa is about 19 mm long and changes from white to pale brown as it matures.

Adult beetles hibernate during the winter in the soil of well-drained sod land. Although they may become active on warm days in late fall or winter, they normally do not resume continual activity until late March or early April. After mating in the soil, females each deposit clusters of three or four eggs in earthen cells. Approximately 2 weeks later, larvae emerge and begin feeding on decaying vegetable matter. After 2 or 3 months, the mature larvae enter a 2-week pupal period. Emerging in August and September, a new generation of adults feeds for a short time before entering hibernation. One generation occurs each year. 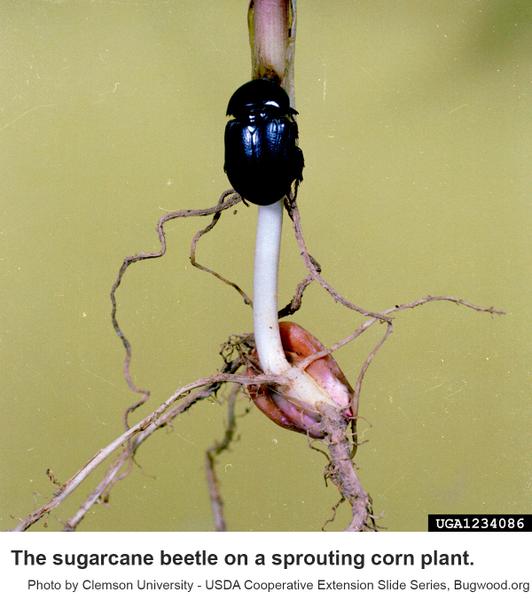 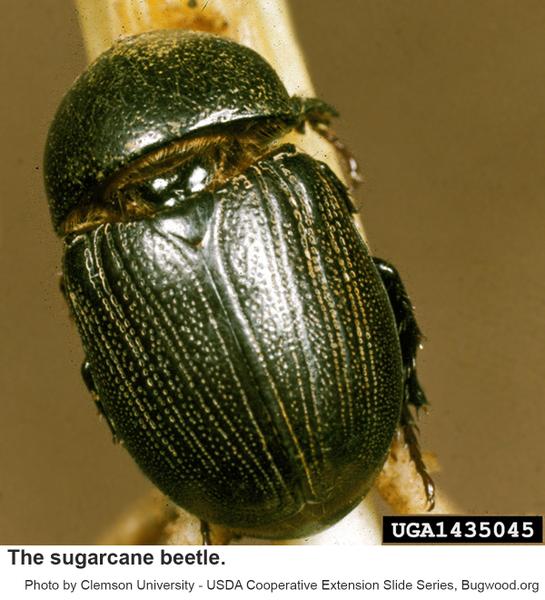 Sugarcane beetles are dark and about half an inch long.

Sugarcane beetles are dark and about half an inch long.

Although the sugarcane beetle is primarily a problem on corn, sugarcane, and rice, it also infests cotton, strawberry, rose, and grasses. The adults can be a nuisance as they are attracted to porch lights. In lawns, sugarcan beetles usually infest bermudagrass, but have also been found on zyosiagrass. Adults may be found dead or crawling along the grass surface during the day although most activity occurs during early night. Adults can also be found just under the turf, and are suspected to feed on the roots and crowns of turfgrass.The larvae are most likely found in bermudagrass and other warm season grasses as well. It is unknown what they feed on but the organic matter in the thatch and soil is probably the main component of their diet. Damage to turfgrass is presumed to be caused solely by the adults tunneling as well as brown damaging roots and crowns. Birds may prey on these beetles during the day and cause additional damage to turfgrass.

Sugarcane beetles occasionally damage turfgrass to the point that suppression is warranted. Current recommendations are aimed primarly at the adult beetles as these beetles are active above ground especially at night. Pyrethoid insecticides are sufficiently labeled for use in home grounds.