The sugarcane beetle, Euetheola rugiceps (LeConte), traditionally a pest of agricultural crops, has become a sporadic, but serious pest of turfgrass on golf courses, athletic fields, home lawns, sod farms, and in pastures. Initially confined to the southeastern United States it has, in recent years, spread as far north as Maryland, west into Texas, and south into Florida (Figure 1). 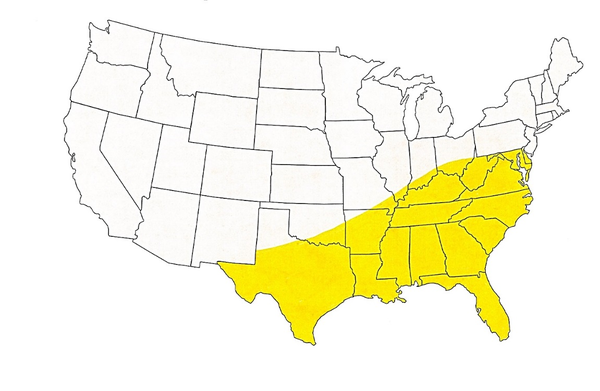 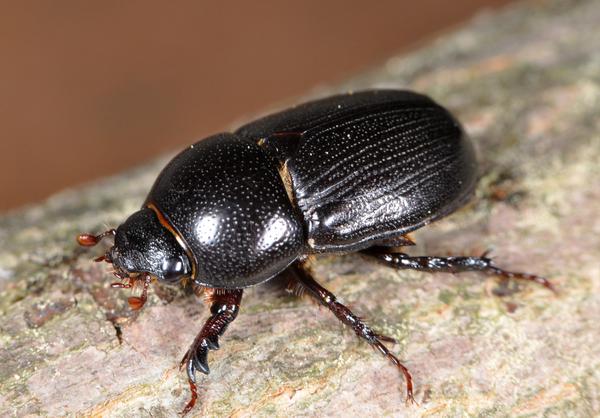 Sugarcane beetle infestations have been primarily recorded in both bermudagrass (Cynodon dactylon Linnaeus) and Zoysia grass (Zoysia spp.) although isolated damaging populations have also occurred in established tall fescue. Sugarcane beetle preference for warm- and cool-season turfgrass has been examined and adults appear not to have a significant preference for either so it is possible to have sugarcane beetle adult activity in cool season turf species. Corn and sugarcane were originally thought to be primary hosts, but adult sugarcane beetles have been recovered often in pasture areas and wild fields feeding exclusively on Paspalum spp. grasses, and especially Juncus effuses (Linnaeus).

Early season adult flight occurs in April and May, with the majority of adults flying the first two weeks of May in North Carolina. Females lay 0-3 eggs a day in the soil and can lay as many as 30-60 eggs in a lifetime. Eggs hatch within 8-10 days, depending on available soil moisture and larvae reach full growth in about two months. Larvae are present in the soil May-August and the next generation of adults begins emergence in September. This adult population is typically much smaller than spring populations and adult flight continues throughout October and November. Once ambient air temperatures decrease below 50°F, adults burrow deeper into the soil to overwinter.

stage. In June, July, and August, larvae primarily feed on decaying plant material in the soil but may incidentally feed on turfgrass roots, weakening a turf stand when larval populations are high. April through November, adults cause direct damage to the turfgrass by attacking the stem of the plant at the soil surface and either cut off the stem completely or sever it so that the plant wilts and dies. Indirect damage to the turfgrass may also occur by adult beetles tunneling and burrowing through the soil during the day. This tunneling behavior, approximately 12-50 mm (0.5-2 in) below the soil surface, weakens the plant root system and creates an uneven turf surface. Adult beetles cause the majority of damage following overwintering emergence in April and May and after the fall emergence in late September and early October. Post-emergence, flying sugarcane beetles are attracted to light sources at night. On golf courses and athletic fields, damage tends to be most severe directly underneath a light source and spreads radially from there (Figure 3).

Cultural practices such as appropriate fertilizer use and infrequent, deep irrigation will result in a vigorous turf stand that is more tolerant of insect pests and may help alleviate some damage issues. Eliminating any unnecessary light sources that may attract adult beetles to the turf area may also be beneficial.

A number of naturally-occurring predators and parasites of sugarcane beetles can help decrease populations but few are available for commercial use. Parasitic flies and wasps will oviposit inside adult beetles so that larvae will consume the insect when eggs hatch. Foraging thief ant populations will feed on eggs in the soil and red imported fire ants may also help reduce egg and larval populations. Sugarcane beetle adults are also susceptible to entomopathogenic fungus infection (Metarhizium anisopliae) and a number of predatory mite species.

Effective chemical control requires a different approach for sugarcane beetles compared to that of other scarabs (Popillia japonica Newman, Cyclocephala spp., Phyllophaga spp.), where early larval instars are targeted. Unlike other white grub species that overwinter in the larval stage, the sugarcane beetle spends the majority of its life cycle as an adult and management plans for effective control of this insect in North Carolina have targeted adults. Generally, pyrethroids and combination products are more successful at suppressing sugarcane beetle populations but application timing, rather than product selection, is a more important determining factor. Whenever possible, spring-flying adults should be targeted because this population is larger, causes significantly more damage and is more susceptible to pesticide application.

are slightly effective at best, and may need reapplication every one or two days.