Sulfur (S) is found in certain amino acids and is a necessary component of proteins, vitamins, and oils. Uptake by the plant occurs in the sulfate form (SO4-2). Plants require less S than nitrogen, phosphorus, and potassium (N, P, and K), but S is still needed in greater quantities than the micronutrients boron, copper, iron, molybdenum, manganese, zinc, nickel, and chlorine. Plant tissue should contain 1 part S for every 15 to 20 parts N, thus giving the plant a N:S ratio of 15:1 to 20:1 for optimum growth and quality.

Sulfur is mainly immobile in the plant compared to N, a highly mobile element. As a result, S-deficient plants have green lower leaves and yellow upper leaves (Figure 1). Nitrogen-deficient plants have yellow lower leaves and green upper leaves. Sulfur deficiency is most likely to occur during early growth, before extensive root development. Crops deficient in S show little or no response to N fertilizer until S deficiency is corrected.

Deficiencies typically occur in deep, coarse-textured soils with low organic matter where sulfate leaches easily. Today, S deficiency may be more of a concern due to several factors: 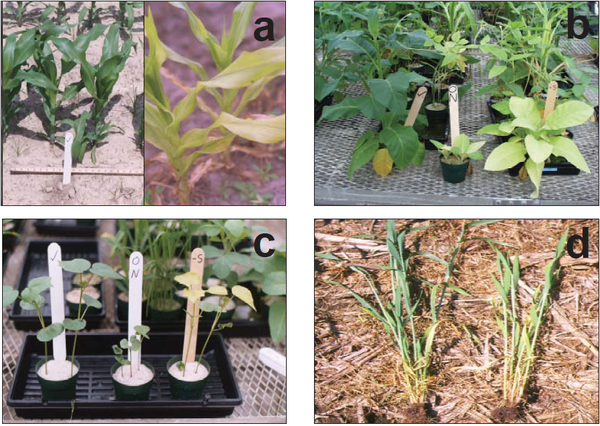 Figure 1. Sulfur deficiency can be seen on the right in stunted growth and pale green/yellow upper leaves in a) corn, b) tobacco, c) cotton, and d) wheat.

Figure 1. Sulfur deficiency can be seen on the right in stunted growth and pale green/yellow upper leaves in a) corn, b) tobacco, c) cotton, and d) wheat.

Corn and wheat tend to be the most sensitive to S deficiency of crops grown in North Carolina. When planted on S-deficient soils, yield increases due to the addition of S fertilizer are likely to occur (Figure 2). Crop species are not all equally sensitive to soil S levels. Sulfur deficiency is rare in soybean, even though it is grown in rotation with corn, which often responds to S fertilizer. Soybean is a tap-rooted crop that may acquire S from deeper depths than more shallow-rooted grass crops such as corn. Cotton is also a tap-rooted crop with a lower incidence of S deficiency than corn and wheat. Peanuts are typically fertilized with gypsum, which also supplies S (1,000 lb CaSO4 contains 190 lb S), so additional S should not be necessary for other crops in this rotation. Growers are advised to pay attention to nematodes since root damage can diminish the nutrient uptake and be a factor in nutrient deficiency occurrences.

Since not all crops respond to S fertilizer, awareness of S uptake and removal will help decide if the additional expense of S fertilizer is necessary. Producers may need to supply more S fertilizer when growing high S-demanding crops, especially in high-yielding environments.

Responses to S fertilization occur most often when S levels are low in both the topsoil and subsoil, typically in deep sandy soils with low organic matter. Sulfate can leach through sandy surface soils but usually accumulates in clay subsoil. The SO4-2 ion is attracted to soil clay-particle surfaces. Even subtle changes in clay content, such as a transition from a loamy sand topsoil to a sandy loam subsoil, can result in significant S accumulation that is within reach of roots.

Response to S fertilizer is more likely if the depth to increased clay content is greater than 18 inches below the soil surface. Natural Resources Conservation Service (NRCS) county soil surveys and field observations should be used to identify potential problematic fields based on the texture of topsoil and subsoil. In the field, using a soil probe can identify whether a textural change occurs before 18 inches depth. When a loamy sand topsoil with low S content overlays a sandy loam subsoil, significant S accumulations may occur (Figure 3).

Soil variability complicates fertilizer management decisions. Note that for each region of the state, certain soils have deeper or sandier surfaces and are thus more likely candidates for S leaching and fertilizer S response (Table 2). In the mountain floodplains, leaching and S depletion are more likely in coarser soils such as Biltmore and Dellwood than in finer soils such as Rosman. Many upland piedmont soils such as Cecil and Vance are eroded and have significant clay near the surface. In contrast, the piedmont floodplain soils, such as Chewacla and Congaree, have more sandy surface layers and therefore are more prone to deep leaching of S through surface layers.

Of the coastal plain soils listed, Candor and Conetoe are most prone to deep S leaching. Most crops grown in tidewater soils are less likely to suffer S deficiency. Some soils have mucky surfaces that can supply S as organic matter decomposes (Belhaven, Newholland). Sulfur deficiencies in these organic soils are more likely in the winter months due to slower mineralization and decomposition rates with cooler temperatures. Other tidewater soils have either finer-textured surfaces (Portsmouth, Tomotley) or a coarse-textured surface layer that is relatively thin (Bojac), so less leaching is expected.

Long-term no-till management is increasingly popular in North Carolina. Without cultivation, crop residue remains on the soil surface, a subsurface network of dead roots and animal burrows persist, and surface-applied lime and fertilizer may concentrate near the surface. While the surface cover and subsurface channels can reduce overland water flow and soil erosion, more water may percolate and leach soluble nutrients deeper in the profile.

Relevant quantities of S can be added to the fields through sulfate contained in irrigation water (Table 3). The S concentration depends on the water source, and we recommend analyzing irrigation water. The North Carolina Department of Agriculture & Consumer Services (NCDA&CS) offers irrigation-water analysis.

Figure 3. At a Bertie County, NC, site with a Conetoe soil similar to the profile in the photo, soil Mehlich-3 S-index level increased dramatically with depth: from 45 in the loamy sand topsoil, to 194 in the sandy loam layer at a depth of 24 inches.

Figure 3. At a Bertie County, NC, site with a Conetoe soil similar to the profile in the photo, soil Mehlich-3 S-index level increased dramatically with depth: from 45 in the loamy sand topsoil, to 194 in the sandy loam layer at a depth of 24 inches.

By the time visible symptoms appear, it is often too late to recover from crop economic loss. Laboratory analysis of soil and plant tissue samples may help predict and ensure that S needs are met.

Sulfur is analyzed and reported in the routine soil testing by NCDA&CS. An S index of 25 or less indicates a need for fertilizer based on sites where S problems were documented. However, the need for fertilizer S depends not only on laboratory results from a topsoil sample (0-4” for no-till and 0-8” for conventional tillage), but also an awareness of the nature of the soil profile and stratification in no-till, as mentioned previously. Take a deeper sample (8-18” depth) periodically to assess S at depths deeper than those measured through traditional sampling. When S is needed, 15 to 25 lb S per acre should be adequate; the lower rate is recommended on soils with higher levels of organic matter.

Tissue testing is an important tool used to assess the nutrient status of the crop. Depending on growth stage, different parts of the plant need to be sampled to correctly assess nutrient sufficiency. Both the percent S and the N:S ratio are used to evaluate crop S status. Find more information at Agronomic Services — Plant Tissue Analysis.

Although visible nutrient deficiency symptoms can be distinct, there are cases where S deficiency looks similar to deficiencies of N, manganese (Mn), or other nutrients. Sulfur deficiency can be visually diagnosed in the field with experience. When uncertainty exists, diagnostic soil and plant tissue samples from good and bad areas are extremely helpful. Because injury from nematodes can cause nutrient deficiencies in some crops, especially on sandy soils, nematode assay may also be a useful tool. It is also important to assess the soil profile, rooting limitations, and root health. For testing information, visit the North Carolina State University Plant Disease and Insect Clinic.

Several liquid and granular fertilizers are available to North Carolina farmers as preplant and in-season applications (Table 4). Organic manures may also be available on a regional basis but need to be tested to determine S content (Table 5). Elemental S and sulfur-coated products are slowly plant-available. Sources containing sulfate differ little in plant availability and are most often used in production systems. The sources of S may contain other nutrients such as N or K; the selection of multi-nutrient fertilizers depends on the plant requirements for all of these nutrients and the costs when compared with single-nutrient fertilizers.

Dry sources of S, such as potassium sulfate (0-0-50), potassium magnesium sulfate (0-0-22), and ammonium sulfate, can be easily blended with other dry fertilizers if needed; 0-0-22 is the main source of magnesium (11.5%) if lime is not needed. These materials can be spread ahead of planting for convenience and after planting. Applying several weeks ahead of planting is not advised on soils with high leaching potential.

Adequate S is necessary for high crop yields and profitable farming. However, one size does not fit all, and not all crops benefit equally from S fertilizers. The best management plan considers the entire crop rotation with S inputs and removal, soil characteristics including potential for leaching and accumulation at lower profile layers, and tillage as related to nutrient stratification and rooting. Rainfall influences leaching of sulfate and should be considered, especially during the growing season. Further assess soil and plant S status by testing soil and plant tissue samples. Growers have several S fertilizer options to best fit their nutrient management plan.