The Small Hive Beetle: A Pest of Honey Bee Colonies

The small hive beetle, Aethina tumida, was first detected in the United States in 1996 near Charleston, South Carolina. In the spring of 1998 in Fort Pierce, Florida, a scientist with the Florida Department of Agriculture and Consumer Services positively identified this beetle as the small hive beetle (SHB), a destructive pest of honey bee colonies. Prior to its detection in the United States, the only recorded sightings of this insect occurred in the southern regions of Africa.

During the summer of 1998, the beetle was blamed for the loss of more than 20,000 honey bee colonies in Florida. The beetles spread quickly. That same year, beekeepers and inspectors also reported occurrences in Georgia, South Carolina, and North Carolina. Since 1998, the small hive beetle has become established in most counties in North Carolina as well as across most of the United States. This demonstrates its remarkable ability to disperse by flight and human transport.

An adult small hive beetle is 5 to 7 millimeters long and brown to black in color (Figure 1A). The SHB is a member of the beetle family Nitidulidae and, therefore, has the club-shaped antennae that are common within this family. For instance, the picnic beetle, which is often mistaken for the SHB, has similar antennae. Other distinguishing characteristics include a shield-shaped thorax and broad, flattened legs. Adult beetles tend to hide on the bottom of the hive or just under the inner cover, and they scatter quickly once the hive is opened. This behavior can make them difficult to locate. Therefore, they may go unnoticed at low levels of infestation.

SHB larvae are small, white, worm-like, and approximately 10 to 12 millimeters long (Figure 1B). The larvae appear similar to wax moth larvae, but SHB larvae are distinguished by their dorsal spines.

As long as a colony of bees remains strong, adult SHBs are not generally destructive and may live in the hive as adults in large numbers for long periods of time without causing problems. If a colony becomes stressed or weakened, however, the beetles will take advantage of this opportunity and begin to lay eggs. Within 24 hours, these eggs hatch into very small larvae that begin to feed immediately. The larvae feed on the honey and pollen stores, as well as on the developing brood. In doing so, they tunnel through the comb and cause stored honey to run out, creating a sticky mess that, in extreme cases, causes the adult honey bees to abandon the hive.

Under ideal conditions, SHB larvae feed for 7 to 10 days. Then they leave the hive, crawl on the ground to a suitable location, dig into the soil, and pupate. Pupation takes three to five weeks (or longer during cooler temperatures), after which the new adults emerge from the soil and seek out a beehive to start the cycle all over again. The new adult beetles can survive a winter within the cluster of bees inside the hive. 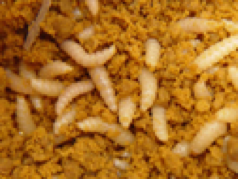 Skip to Impact and Future Outlook

When the SHB was first detected in North Carolina, the NC Department of Agriculture & Consumer Services (NCDA&CS) set up a quarantine with the goal of minimizing its spread and possibly eradicating it. The quarantine was lifted in July 2003 because the beetle had successfully established itself across the state and thus eradication was no longer an option. Although entomologists originally believed that SHBs could survive only in sandy soil and warm climates, the beetles have demonstrated that they can survive in just about any kind of soil. They can also survive extreme winter conditions. 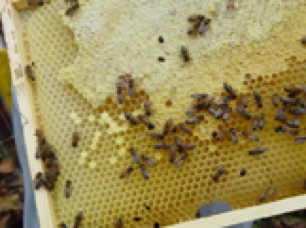 Figure 2. Adult small hive beetles (circled) crawling on the surface of a comb inside a beehive.

Figure 2. Adult small hive beetles (circled) crawling on the surface of a comb inside a beehive.

In the past, some of the more severe problems caused by SHB infestations occurred in the honey house where supers had been stacked and were waiting to be extracted. Beekeepers must take preventive measures to ensure healthy colonies and thus minimize hive infestations by SHBs. The following precautions should be taken to keep these beetles from infesting bee colonies:

These are some other recommendations that should be followed to help prevent invasions and infestations of the small hive beetle into your bee yard:

For controlling the SHB inside the beehive, coumophos is the only registered chemical pesticide available. This product (sold under the trade name of CheckMite+) is formulated as plastic strips impregnated with the pesticide. The strips are cut in half and attached to a small piece of cardboard placed on the bottom board of the hive. The beetles will hide beneath the cardboard and contact the pesticide, which kills them. Coumophos is an organophosphate that can be very dangerous to humans and honey bees if misused. It is important to read the label and follow the directions carefully. These precautions are especially important:

A nonchemical means of inside-the-hive control is the West small hive beetle trap. This is a two-piece plastic trap that sits on the existing bottom board. The top piece has small holes, and the bottom is filled with vegetable oil. As the beetles enter and move throughout the hive, the bees tend to chase them, causing the beetles to look for a hiding spot. The beetles try to escape the harassment of the bees by exiting through the holes of the trap. Then they fall into the oil and drown.

Another product, GuardStar, is available for control outside the hive if larvae are observed crawling out of a hive entrance. GuardStar is a liquid treatment that is mixed with water and applied to the ground around the hive to kill the beetles pupating in the soil. The active ingredient is permethrin, a synthetic pesticide that is highly toxic to honey bees. Therefore, this product should be applied with great caution.

At this writing in early 2006, there are still many unknowns about this beetle, such as their mating cues and the signals they use to locate a hive. Researchers are working to decipher these cues to SHB behavior, which may lead to better control measures in the future, such as lures and bait traps.

If you think you have small hive beetles in your hives, you should contact your regional NCDA&CS apiary inspector before you begin treatment. Once the presence of the beetles has been verified, treatments may be used as needed. But neither CheckMite+ nor GuardStar should be used as a preventive measure. 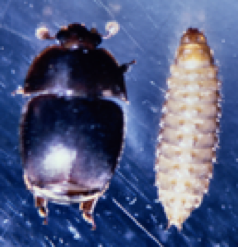 Figure 3. A comparison of an adult SHB and a SHB larva.

Figure 3. A comparison of an adult SHB and a SHB larva.

Skip to For More Information

This project received support from the Golden LEAF Foundation.