The Use of Management Practices to Reduce Mycotoxin Contamination in Corn

Two mycotoxins commonly associated with corn are aflatoxin and fumonisin. Species of Aspergillus produce aflatoxin, while species of Fusarium produce fumonisin. Both of these fungi cause ear and kernel rots in corn. Aflatoxin contamination has been a known problem for decades in the United States. In 1969, the Food and Drug Administration (FDA) set the action level for aflatoxin at 20 parts per billion (ppb) for human consumption (FDA 2009). In farm animals, chronic exposure to aflatoxins compromises immunity, interferes with protein metabolism, reduces weight gain, and can lead to hemorrhaging (CAST 2003). Large doses lead to acute illness and death in animals and humans. Furthermore, all doses of aflatoxin have a cumulative effect on the risk of cancer (CAST 2003; FDA 2012).

Fumonisin contamination is more of a recent problem in corn. In 2001, the FDA recommended that there be no more than 4 parts per million (ppm) of fumonisin in food for human consumption (FDA 2001). Consuming fumonisin-contaminated grain has been associated with a higher risk of esophageal cancer and neural tube birth defects in humans (Marasas et al. 2004). The two farm animals most sensitive to fumonisin are horses and swine. Fumonisin causes leucoencephalomalacia in horses and pulmonary edema in swine (CAST 2003). For more information on guidance levels of mycotoxins in livestock feed, visit the National Corn Growers Association website.

Because of the health and economic consequences of mycotoxin contamination, it is imperative to use reliable contamination control methods. Three strategies to manage mycotoxigenic fungi include the use of fungicides, biocontrol agents, and Bt hybrids. Several fungicides are labeled for corn and may be potentially useful in controlling Aspergillus and Fusarium species. In this publication, we examine three fungicides—Headline, Quilt Xcel, and Stratego YLD—for their ability to reduce mycotoxin contamination in corn. Headline, a BASF fungicide, is used to control anthracnose, gray leaf spot, northern and southern corn leaf blight, rust, and a few other fungal diseases (BASF 2014). Quilt Xcel, a Syngenta Crop Protection fungicide, is used to control anthracnose, gray leaf spot, Diplodia ear rot, northern and southern corn leaf blights, and other fungal diseases (Syngenta 2014). Stratego YLD, a Bayer CropScience fungicide, is mainly used to control gray leaf spot, rusts, anthracnose, northern and southern corn leaf blight, and brown spot of corn (Bayer CropScience 2014). None of these fungicides had been previously tested for control of Aspergillus or Fusarium (BASF 2014; Syngenta 2014; Bayer CropScience 2014).

Genetically modified maize has been grown in the United States since 1995. One of the first genetically modified traits was the expression of proteins from Bt (Bacillus thuringiensis) in corn hybrids (University of California, San Diego). Bt is a bacterium whose proteins are poisonous to insects. Bt hybrid corn expresses these genes, therefore producing the proteins and thus controlling insect damage. Current Bt transgenic events are effective in controlling corn borers (Ostrinia nubilalis) and corn earworm (Helicoverpa zea), which can damage both the stalk and the ear. Corn borers and corn earworms create entry points in stalks and kernels for other detrimental microorganisms, such as toxigenic fungi. Therefore, not only does Bt reduce damage by the insects themselves, it also reduces the amount of secondary damage from disease causing organisms.

Three fungicides (Headline, Quilt Excel, and Stratego YLD) were tested either alone or in combination with a biocontrol agent for their efficacy in reducing mycotoxin contamination in corn. Headline-treated corn plants had lower aflatoxin contamination than plants treated with Quilt Xcel or Stratego YLD (7.8 versus 8.9 ppb). Aflatoxin contamination was too low (<2.5 ppb) in experiments designed to determine if there was a significant difference between using a biocontrol or not in partner with fungicides. Quilt Xcel and Stratego YLD had a greater impact on reducing fumonisin levels (0.16 and 0.21 ppm, respectively) than did Headline (0.41 ppm). Overall, the levels of aflatoxin and fumonisin observed in this study were below the FDA guidelines for human or animal consumption.

Yield
Yield was affected by use of fungicides. Quilt Xcel had the highest yield of 185 bushels per acre (bu/acre) compared to Headline (154 bu/acre), Stratego YLD (161 bu/acre), and the non-treated control (139 bu/acre) (Figure 1).

Fungicide Summary
For control of mycotoxins, Headline would be the preferred fungicide because it resulted in the lowest aflatoxin contamination and roughly the same fumonisin contamination as the other fungicides. Since mycotoxin levels in this study were low, more research is needed to confirm the advantage of using Headline to reduce mycotoxin contamination. Although Quilt Xcel produced the greatest yield, all the fungicides increased yield compared to the non-treated control. 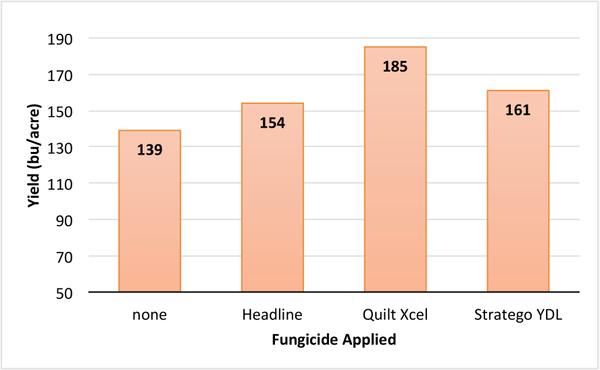 Figure 1. Average yield for each applied fungicide. The control group—no fungicide—serves as comparison.

Figure 1. Average yield for each applied fungicide. The control group—no fungicide—serves as comparison.

Afla-Guard® and AF36 were applied at V5 (five fully developed leaves) or VT (50% tassel emergence) with rates of 2.5, 5, 7.5, or 10 pounds per acre (lb/acre). Fumonisin and aflatoxin contamination and yield were taken to measure performance of applied biocontrols. Yield and mycotoxin levels also were recorded for non-treated controls to serve as background information.

Timing of Biocontrol Application
Application timing did not affect the efficacy of either biocontrol. There were no significant differences in aflatoxin or fumonisin levels when either AF36 or Afla-Guard® were applied at V5 compared to an application at VT (Figure 2). Considering both biocontrols target Aspergillus, the lack of a reduction in fumonisin contamination from either a V5 or a VT application was expected. The highest yield of 169 bu/acre occurred when AF36 was applied at V5. The yields for the other three treatments—AF36 at VT, Afla-Guard® at V5, and Afla-Guard® at VT—were 153 bu/acre. Overall, application timing of either biocontrol had little effect on yield. The use of biocontrol products did not reduce mycotoxin contamination or increase yield when used in combination with fungicides.

Biocontrol Summary
The most important consideration when using a biocontrol product is the application rate. When applied at 7.5 or 10 lb/acre, both biocontrol products were effective in reducing aflatoxin contamination while maintaining yield. Applications at V5 were as effective as those at VT, which provides growers a wide window of opportunity to apply these products. Neither product had a significant impact on fumonisin contamination. 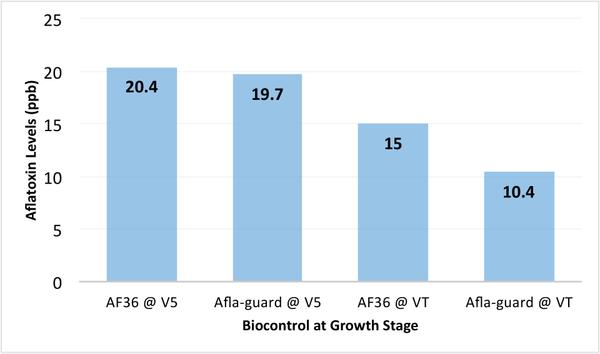 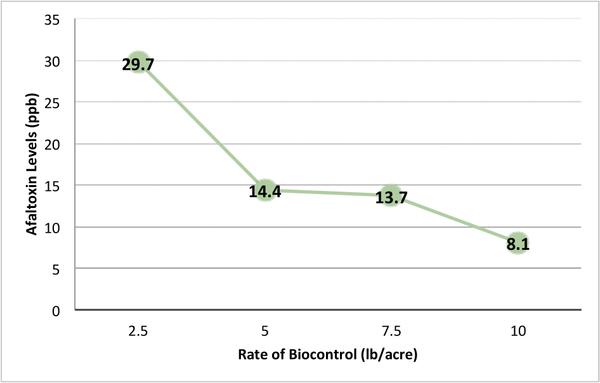 It was difficult to detect fumonisin contamination differences amongst hybrids due to the very low levels of fumonisin observed in the fields. Although there was no significant difference among the hybrids, N78S-3111 (Viptera) still had the lowest fumonisin contamination at 0.76 ppm compared with N74R, which had 1.2 ppm. There also was no significant yield difference amongst hybrids (Figure 5). N74R-3000GT (Yield Guard) yielded the same as N78S-3111 (Viptera) at 193 bu/acre. The lowest yield at 191 bu/acre was N78S-GT (non-Bt).

Bt Hybrid Summary
The Viptera hybrid (N78S-3111) reduced aflatoxin contamination while maintaining yield. Viptera also had the lowest fumonisin contamination at 0.76 ppm, which is a level that is safe for consumption. Moreover, Viptera yielded the same as the other hybrids, which confirms that there is no yield penalty or trade-off. Therefore, this study suggests that corn producers could use Viptera hybrids for the reduction of aflatoxin (and fumonisin) while obtaining normal yields. 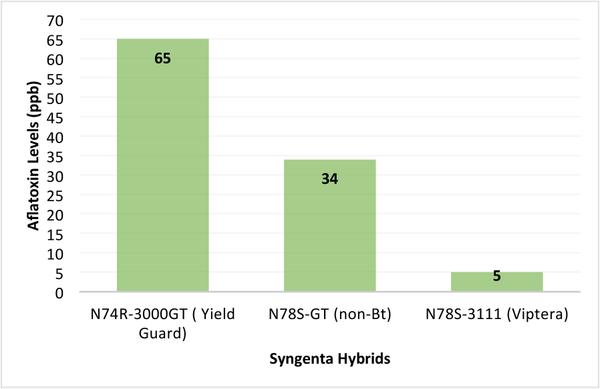 Figure 4. Aflatoxin levels for each of the three Syngenta maize products tested.

Figure 4. Aflatoxin levels for each of the three Syngenta maize products tested. 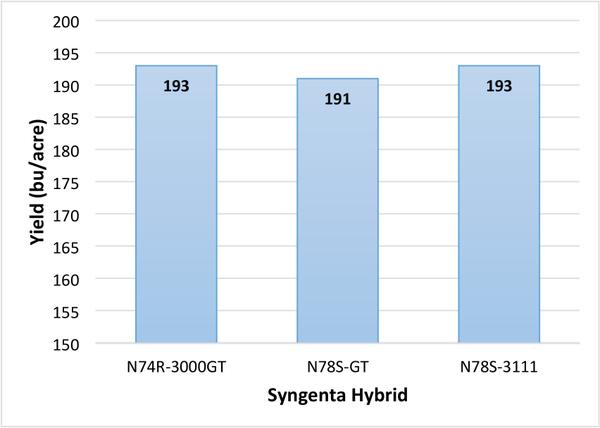