The tufted apple budworm moth, Platynota idaeusalis, is gray with reddish brown to dark brown markings and about 1/2 inch long. The hindwings are grayish brown to dark brown. It is called tufted because it has tufts of dark, raised scales on the fore wings. These moths have noticeable "snout" (the labial palps) that are as long as the head and thorax combined. Tufted apple budworm caterpillars grow to about 5/8 inch and are green to brownish green. The head and the patch just behind the head are brown to dark brown, and the head is mottled. This species has a comb-like structure with five to eight teeth just above the anus. We have two generations per year. Tufted apple budworm moths are in flight from May to July and again in August to September. Females lay eggs in masses of about 100 eggs on the upper surface of leaves. Young caterpillars spin silk webbing under which they feed on the underside of a leaf usually along the midrib. Later instars feed within rolled, folded, or tied leaves. They pupate in a folded or rolled leaf. Tufted apple budworms overwinter as diapausing caterpillars in leaf litter. Increasing daylengths and warmer temperatures induce the caterpillars to molt into pupae. A new generation of moths emerges 6 to 28 days later. 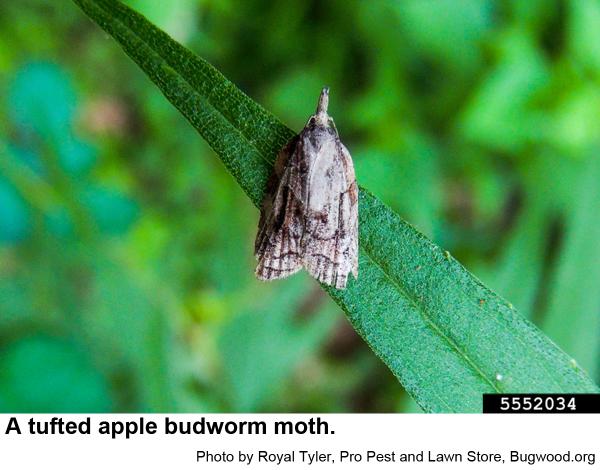 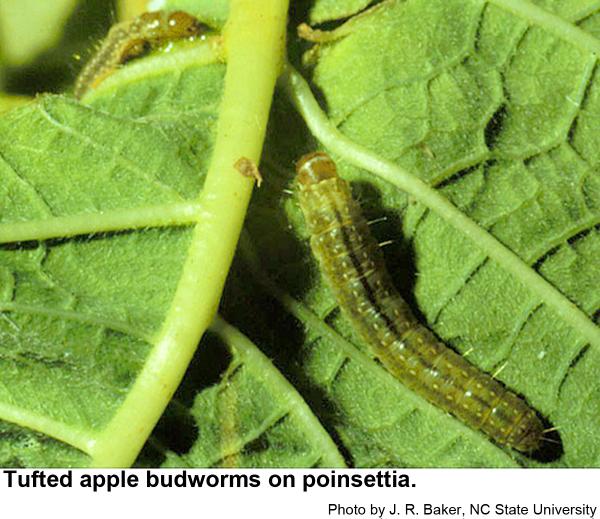 Because tufted apple budworms usually hide in their webbing, it would be best to use a pyrethroid insecticide because pyrethroids have a long residual life. (Pyrethroids are available in the garden section of big box stores and in nurseries and plant centers.) When the budworms emerge from their webbing to cut leaves and drag them back to feed, they then can encounter the pesticide residue on the leaf fragments if the pesticide has a long enough residual life (most pyrethroids do).