The twig pruner, Elaphidionoides villosus or Anelaphus villosus, is a slender grayish-yellow, longhorned beetle about 1/2 inch long that is normally considered a secondary invader of declining trees and shrubs. The twig pruner attacks healthy twigs and small branches. The female lays an egg in the bark by slitting the surface at leaf axils in late spring. When these eggs hatch, the legless grubs bore into the twig. As the grubs mature they become slender and continue boring down the twig. Eventually, mature larvae chew concentric cuts outward in the white wood (but not through the bark). The infested branch (5/8 to 2 inches in diameter) eventually drops to the ground with the larva inside. A small oval shaped hole in the end of the branch is a tell-tale sign of the twig pruner. The larva usually packs the opening with a frass plug to keep out predators and parasites. The larva continues feeding for a short time before it pupates inside the severed twig where the winter is spent. 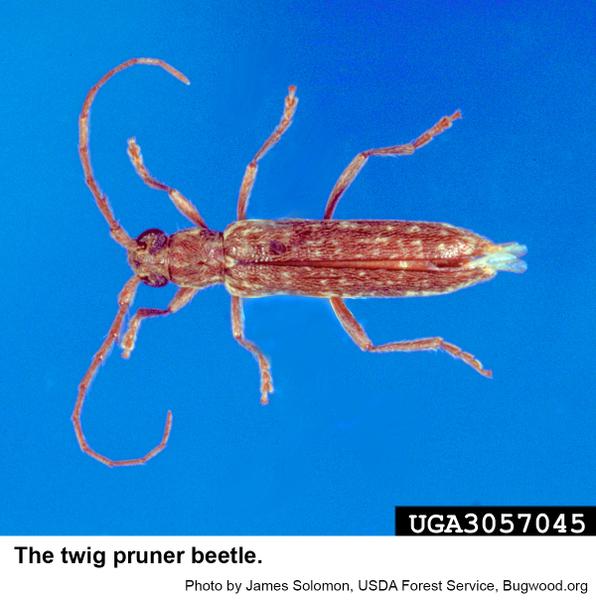 Twig pruner beetles are about half inch long.

Twig pruner beetles are about half inch long. 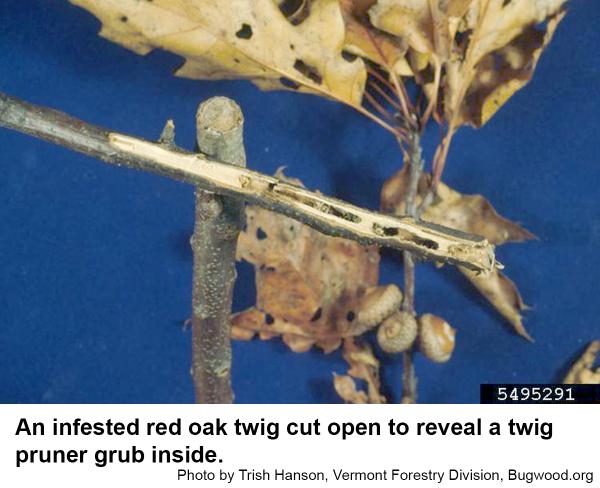 Fallen branches should be raked up and destroyed or sent to a landfill because the overwintering grubs are inside. When twig pruners are active in an area, thought could be given to spraying susceptible plants with a pyrethroid the following spring to try to prevent damage for the coming season. Trees under stress seem to be more attractive to the adult borers than trees in healthy condition. Drought stress may make young trees attractive to twig pruner adults. On the other hand, if the trees are getting too much fertilizer and are growing too fast, they may become susceptible as well.