Most of us have an unpleasant memory of being stung or we have a fearful reaction when we encounter a nest of paper wasps (Polistes sp.) under the porch or carport ceiling. The first thing we reach for is the broom or spray can of insecticide. Paper wasps should not be confused with their relatives, dirt daubers, which are dark metallic blue, build mud tube nests, catch spiders, and do not sting people unless caught in the hand. Paper wasps, in contrast, often sting when disturbed on their nest.

Animals all need protein and wasps obtain protein by eating other insects. Hornets, for example, feed upon flies and other flying insects. Paper wasps generally eat caterpillars. A few common pest caterpillars listed in the literature are cabbage butterfly, Fall webworm and several oakworm species. Some colonies have been reported to prey upon 2,000 caterpillars. Tests have shown that enhancing paper wasp populations in tobacco fields reduced caterpillar populations in the crop. Thus, wasps can be real biological control for the landscape and garden. Wasps are helpful in the landscape, and paper wasps are one of the easiest types to manage. All one needs to do is provide nest sites. The key is to encourage the wasps to build nests where YOU want them and away from places they might be a hazard.

Paper wasps build nests of open, gray, paper-like cells that are attached to the underside of a support and hang downward. Mated females overwinter in dry protected areas such as hollow trees, under bark, in woodpiles, open barns, attics or wall voids. In the springtime when the weather warms, these females (queens) search for a place to build a nest. It is always in a place with some protection and overhead cover. The overwintered female begins to build the nest by chewing dead wood and mixing it with saliva to form a few cells that hang from a short stalk. She lays an egg in each cell and guards the nest. She feeds the young larvae pieces of chewed caterpillar. After larvae are grown and become adults, these newly hatched workers take over the duties of nest building and feeding the next generation of larvae. They are often noticeably smaller than the founding female. The original female then stays with the nest to lay more eggs.

Nest size varies, and colonies can range from six or seven, to fifty or 100 individuals. The most effective period of caterpillar predation is late spring and summer. In late summer and fall, nest populations begin to decrease. Male wasps (which don't sting) and future reproductive females are produced. The male wasps mate with late-season females who will attempt to survive the winter and begin new nests next spring. As the weather becomes cold, the nest population dies away. Abandoned nests can be removed because they are not reused the following year. 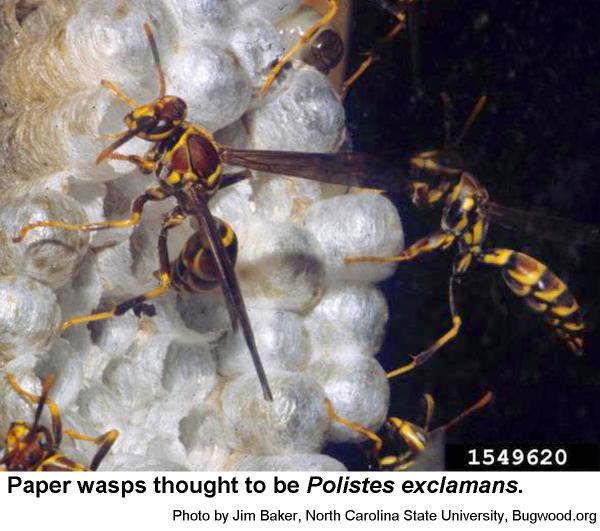 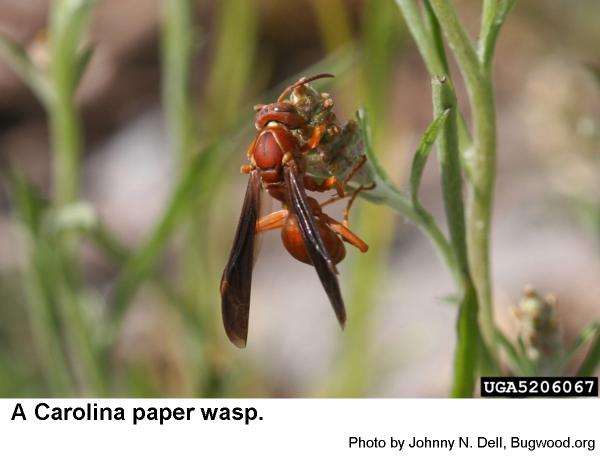 The Carolina paper wasp tends to be solid rusty-red.

The Carolina paper wasp tends to be solid rusty-red. 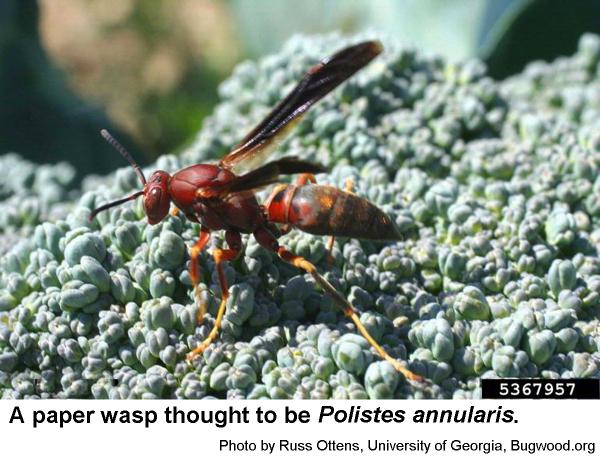 Polistes annularis paper wasps usually have a distinct, yellow ring around the abdomen.

Polistes annularis paper wasps usually have a distinct, yellow ring around the abdomen. 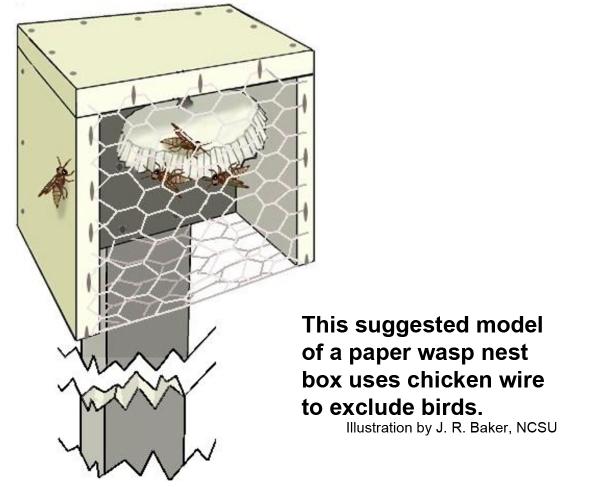 Paper wasp nest boxes should be at least 4X4X4 inches inside dimension.

Paper wasp nest boxes should be at least 4X4X4 inches inside dimension.

A simple box can be four-sided construction and placed 4-6 feet above the ground for easy observation. A little higher or lower is fine. Precise dimensions are not critical and, if desired, a front board or chicken wire may be added for additional protection from predators such as birds. Materials may even be scrap lumber. An old birdhouse with the bottom removed makes a fine structure or just use your imagination! You may want to make it colorful or a creative piece of art.

Five-sided boxes can have a front board with an open bottom. An open, hinged bottom could also be incorporated in the design so the box can be closed and relocated during the night before that yard party the next day!

The nest shelter can be attached to a post, wall, or tree. Locate it away from animal or human traffic and away from vibrations or disturbances. Don't locate it next to an area where you need to mow frequently. Normally, paper wasps will not become defensive unless the nest itself is disturbed. They can be approached within several feet and observed by avoiding fast or sudden movement. Of course, if you or anyone in your family is allergic to wasp stings, leave paper wasp management for your neighbors.

Nest boxes should be up and in place by early spring. Be sure to remove any old nests built from the previous year.