What Is Solar Energy?

Skip to What Is Solar Energy?

Solar energy refers to the process of using light from the sun to provide energy in the form of either usable heat or electricity. The energy in the sunlight is available for at least the next six billion years whether we harness it or not, making it an inexhaustible renewable source of energy that is available across the globe. Because energy from finite sources such as fossil fuels and nuclear fuels produce the majority of energy consumed in this state, North Carolina’s environment and its residents’ health can benefit from investing in renewable energy production such as solar energy.[1] Additionally, investments in solar energy are also often a good economic investment as well.

How Does Solar Thermal Work?

Skip to How Does Solar Thermal Work?

Solar thermal technology involves using light from the sun to provide heat. The system collects the sun’s energy to heat air or a liquid. The air or liquid then transfers solar heat directly or indirectly to your home, water, or pool.[2] For generations, solar thermal has proved to be a financially viable and environmentally friendly source of water heating for homes and businesses, sometimes even being the only heat source used. The systems are most attractive when offsetting a high-cost heat source such as propane.

All solar thermal systems (Figure 1) consist of at least solar thermal panels, also known as collectors, and a form of energy storage, usually in the form of a tank of hot water. In the case of a solar pool heating system, the energy storage is in the pool water itself. 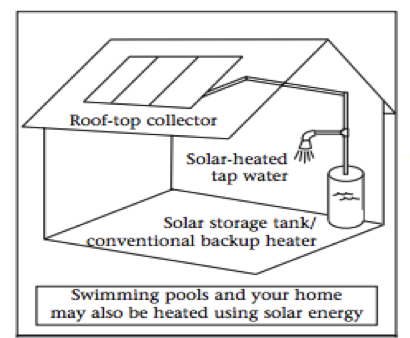 How Do Solar Photovoltaics Work?

Skip to How Do Solar Photovoltaics Work?

Today’s photovoltaic (PV) systems convert sunlight into electricity at an efficiency of 15% to 22%. The systems have two primary components, PV modules and inverters. PV modules (Figure 2), commonly known as solar panels, produce direct current (DC) electricity, and inverters convert the DC electricity into grid-synced alternating current (AC) electricity. The same module(s) can be used for either a rooftop or ground-mounted solar installations. However, because such projects usually vary in terms of scale, each often uses different size inverter(s).

PV modules are comprised of many individual solar cells (Figure 3) that are connected to each other in series and sealed behind a layer of tempered glass. A group of solar modules in a PV system is called an array (Figure 4). There are no moving parts to wear out, so the modules are very reliable and durable. The industry standard is a 25-year power warranty that warranties that after 25 years the modules will still produce at least 80% of their nameplate capacity.

A conventional photovoltaic solar cell is made of two layers of a semiconductor material, most commonly crystalline silicon, either a single crystal referred to as monocrystalline or many smaller crystals referred to as poly- or multi-crystalline. To make a silicon PV cell a highly-refined silicon wafer is infused on opposite surfaces with small amounts of boron and phosphorus. This process is called doping, and it results in two distinct layers that results in an electrical field between them. When sunlight hits the solar cell the energy of the sunlight knocks electrons loose from the crystalline structure and the electric field in the cell causes negative charges (electrons) to collect on one side of the cell and positive charges (called “holes”) to collect on the other side, creating a DC voltage. When the two sides of the cell are connected together with an external wire a current flows. When the wires from many cells are connected together as in a PV array and connected to an inverter the PV cells provide a combination of voltage and current that results in DC power generation. In a grid-connected PV system, an inverter converts the DC power into grid-synced AC power allowing the solar electricity to serve the grid.

An alternative to crystalline silicon, thin-film technology, creates solar cells by applying a semiconductor onto a glass or metal surface in an extremely thin film. The semiconductor may be silicon, or other materials such as cadmium telluride (CdTe), or copper indium gallium diselenide (CIGS). Thin-film PV modules, primarily in the form of CdTe from the US manufacturer First Solar, accounts for less than 10% of today’s solar PV production.[3] Historically, thin-film technology has had a lower efficiency when compared to conventional silicon PV technology, but steady advances in thin-film efficiency have almost closed the efficiency gap. Some thin film technologies are cost competitive with silicon PV today but there is hope that these technologies could one day produce much lower-cost PV panels.

Concentrating PV (CPV) modules use tiny high-efficiency PV cells in combination with optical devices, such as lenses or mirrors that concentrate the sun onto each tiny PV cell. These systems can afford to use very high efficiency PV cells that are too expensive to put in a non-concentrating module because due to the concentration the system requires only 1/500 or 1/1000 of the PV material. Similar to other concentrating solar technology, (introduced in the following section), CPV is not likely to be developed in North Carolina due to our climate.

Each PV module is rated to produce a certain amount of power (an instantaneous rate of electricity production, analogous to the top speed of a car) under Standard Testing Conditions (STC), which involve a near-ideal environment for PV production consisting of full sun and a cool PV cell temperature. A typical conventional module is rated at 250 to 350 watts. This means that under near-ideal conditions the module will produce DC electricity at a rate of 250 to 350 watts. This is also referred to as the DC generating capacity. Because the DC capacity is based on conditions that rarely occur, PV systems are usually designed with a DC capacity 10% to 50% higher than the AC capacity. The AC capacity is the maximum power output that can be produced by the inverter(s). For example, 7 MWDC of solar modules may be connected to inverters capable of producing just 5 MWAC. Over time, the module produces energy, measured in watt-hours or kilowatt-hours (kWh) (continuing the car analogy, this is comparable to total miles traveled).

On average, North Carolina receives about 12 hours of sunlight a day, but the intensity of the solar energy on the PV array varies throughout the day. The intensity peaks around noon, and many days cloud cover blocks some, or even most, sunlight. Factoring in these elements, on average, a solar module that isn’t at all shaded by trees or other objects, receives the equivalent of about five hours of direct peak sun per day in North Carolina. So, a small 1,000 WDC, or 1 kWDC PV system will produce about 5 kWh per day, on average across the year (1 kW at full sun x 5 hours of full sun = 5 kWh). The average home in North Carolina requires around 10 kWDC of unshaded PV capacity to match its total annual electricity usage.[4] If you are interested in calculating the energy that could be produced on your roof or property, the US Department of Energy offers a free online estimator tool. 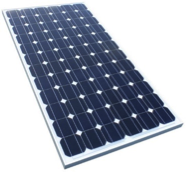 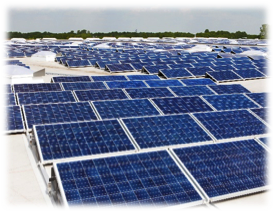 Traditional flat plate PV technology is the most widely used in the solar industry, but it is not the only solar energy technology available. Concentrating solar power (CSP), also called solar thermal power, uses parabolic troughs or fields of moving mirrors, to concentrate energy from the sun to heat a liquid, often an oil. The collected heat produces steam which drives steam turbines that are connected to electrical generators. Some systems are able to store heat energy for hours, allowing them to produce electricity when the sun is not shining.

Both of CPV and CSP systems require concentrated sunlight. The mirrors or lenses used to concentrate the energy from the sun can only concentrate sunlight coming from the same direction directly from the sun, referred to as direct beam sunlight. 2-axis tracking systems that constantly follow the sun are needed to keep the concentrated sunlight focused on the energy receiver. The installation of concentrating solar systems is typically limited to dry climates that have fewer clouds and less humidity and thus have an adequate amount of direct beam sunlight. Due to the moist climate with high humidity and regular cloud cover, it is unlikely that CPV or CSP systems will be developed in North Carolina.

Skip to Overview of PV System Types in North Carolina

In discussions about solar PV systems, three of the more common, initial questions are “What is the system powering?” “What does a system like this cost?” and “What savings does it provide?” By addressing each of these questions for the three most general types of systems (residential, commercial, utility-scale), this section will serve as a primer on the practicalities of PV systems in NC.

Residential: Residential PV systems generally have capacities between 4 kWDC and 10 kWDC, which likely provides between 25% to 100% of the home’s annual electricity usage depending on system size and annual household electricity consumption. Most residential PV systems are net metered, which means that any electricity generated by the PV system that is not used at that moment turns the meter backwards as it is sent to the grid for use by neighbors. Duke Energy and Dominion Energy offer net metering but few of the state’s cooperative or municipal utilities offer it.[5] Residential systems in 2016 cost around $3.00 to $4,00 per DC watt, or about $17,500 for a typical 5 kWDC system. A federal 30% tax credit can reduce this cost, and loans are often available to finance the purchase.[6] A well-sited 5 kWDC system will produce around 6,500 kWh a year, at $0.10/kWh this is a savings of $650.

Commercial/Industrial: Commercial/industrial PV systems are generally installed on flat roofs and often have capacities between 100 kWDC and 2,000 kWDC. They are grid-connected and may or may not be net metered (the current individual system capacity limit for net metering is 1,000 kWAC for systems in investor-owned utility territories). If not net metered, they sell all of their output to the local electric utility at that utility’s Avoided Cost rate, which is the utility’s marginal cost to produce energy, or in other words, what it would have cost the utility to produce that same energy rather than buying it from the PV system. The percentage of the onsite electricity usage provided by a commercial PV system varies widely depending on the size of the PV system and the intensity of electricity usage, but it is not uncommon for a commercial facility to be able to meet the majority of their annual electricity needs with a rooftop PV system. Due to improved economies of scale, installed commercial/industrial PV systems can be around $2.00/WDC and have a similar performance to a well-sited residential system. The financial attractiveness of a given system often depends greatly on the property’s utility rate structure.

Utility-Scale: The vast majority of the PV capacity installed in North Carolina as of 2016 is in the form of utility-scale PV, often called solar farms. These systems are ground-mounted and have a capacity of least 1 MWAC, but much more common are capacities of 5 MWAC and 20 MWAC. There are significant economies of scale provided by these larger capacities, which reduce the cost of such systems well below $2.00/WDC. In NC, systems at or below 5 MWAC in size generally sign a fixed-price 15-year Power Purchase Agreement (PPA) with a utility company to sell all of the PV system’s output at the utility’s current Avoided Cost rate, which is around $0.06-$0.07/kWh. The systems are generally structured as a Limited Liability Corporation (LLC) in a partnership flip arrangement that allows the system to use a combination of tax equity investment, bank loans, and developer investment to fund the construction of the system. The LLC receives a 30% federal tax credit and revenues from the sale of the electricity it produces, which together allow the system to fully pay for itself before the end of the PPA.