White grubs are the larvae of scarab beetles. The grubs of economic importance in North Carolina are those of the Japanese beetle, the green June beetle, the southern masked chafer, the northern masked chafer, May-June beetles and the Asiatic garden beetle. Several other species are also present but usually in low numbers. The Japanese beetle is consistently the most damaging grub in this state. Two relatively new pests, the turfgrass ataenius (on bluegrass) and the oriental beetle, are present in western North Carolina. These insects appear to be expanding their range and may become serious problems in the near future.

All these grubs have cream colored bodies with yellow to brownish heads, brownish hind parts, and six legs. Mature grubs vary in length from 1⁄4 to 11⁄2 inches, depending on the species. White grubs usually lie in a curled or C-shaped position. Billbug larvae may also be present but can be distinguished by the absence of legs. 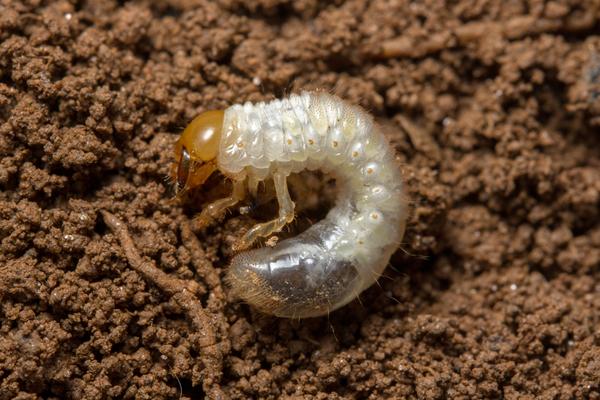 A biological treatment method, useful against only Japanese beetle grubs, is the application of milky spore bacteria. This commercially available bacteria, when applied to the soil, infects the grubs and produces a disease. Grubs in the soil come in contact with the spores through ingestion. The spores germinate inside the grubs, eventually killing them. These spores work best when applied in late September or early October to soil with a pH level between 6 and 7. The results are not as rapid as with chemical insecticides, but the effects last many years. When milky spore disease becomes established, it will spread naturally to adjoining, untreated areas. Application at the time of turf installation may result in a more uniform distribution of the spores in the soil. This product is available at many garden shops under such trade names as Doom®, Japidemic®, or Milky Spore.

The timing of the insecticide application is critical if control is to be effective. There are two approaches, preventative and curative. Some of the newer products (Merit® and Mach 2®) are preventative, and are most effective when applied prior to when the eggs are laid. This approach should only be used in areas that have a history of grub infestations. The curative approach is used when an existing infestation is detected. The best time to apply curative insecticides is when the grubs are actively feeding near the soil surface. Pesticides applied any other time will be ineffective. This feeding occurs from August through October, and again in April through early May. Curative treatments applied in late summer or fall are usually more effective than spring applications because the grubs are small. Specific timing depends on the species of grub, and on location in the state. Timing of applications in the mountains will generally be later than in the eastern part of the state. Timing of applications for control of the turfgrass ataenius varies.

Another factor affecting chemical control is irrigation. Irrigation prior to application is highly recommended, especially in dry weather. Grubs stay deep in the soil when conditions are dry, and irrigation a day or two before application helps to bring them closer to the surface and improves control. Insecticides kill grubs more effectively if watered in after application. The only exception is carbaryl (Sevin) used to control green June beetles; it should not be watered in. After treatment, green June beetle grubs may be found on the soil surface, whereas other grub species will die in the soil.

Recent studies indicate that traps for Japanese beetle adults have no real impact on the subsequent population of grubs in the soil. The use of Japanese beetle traps can also attract the foliage-feeding adults into areas where they may feed on ornamental landscape plants. Because environmental conditions, methods of application by growers, and performance of the chemicals may vary widely, control results may also vary. For additional information on insect control, timing and pesticide use contact your local Cooperative Extension center.

*Products in bold applicable to Green June beetles only.