The moth of the white-lined leafroller, Amorbia humerosana, is a small, mottled tan to brown or gray insect speckled with tiny black spots. The antennae are slender. The moths are 1/2 to 5/8 inch long when at rest. Whitelined leafrollers are yellowish green to brown with an orange brown head and grow to 1 or even 11/4 inch long. They can be distinguished by a dark brown to black band on the head and side of the prothorax with a distinct white line above (identification of small, young caterpillars is difficult as the lateral bands are often absent). The skin is covered in microscopic, sharp spinules. These caterpillars are slender, with three pairs of thoracic legs and five pairs of fleshy, abdominal legs. The abdominal legs have tiny crochets (hooks) that form an almost perfect but incomplete circle. On broadleaf hosts, they roll leaves to form a shelter from which they venture out to feed. Mature whitelined leafrollers crawl or drop to the soil and pupate, sheltered by debris. New moths emerge as early as March and fly throughout the growing season. The winter is spent in debris on ground. Mature caterpillars present from July to September. We have one generation per year. 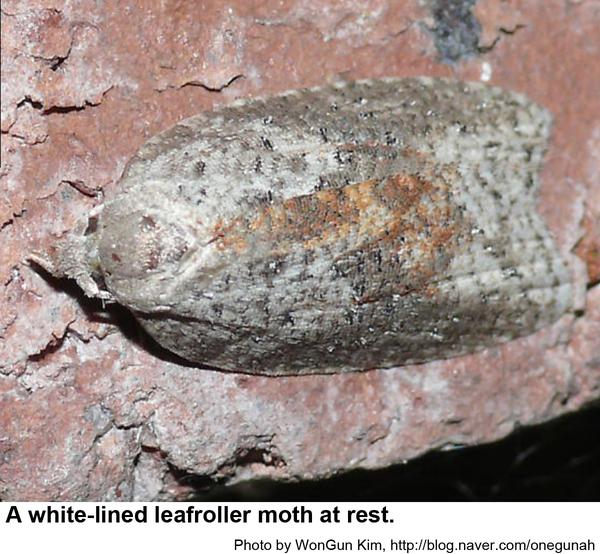 White-lined leafrollers are small, gray, speckled, and usually have reddish-brown smudge down the back.

White-lined leafrollers are small, gray, speckled, and usually have reddish-brown smudge down the back. 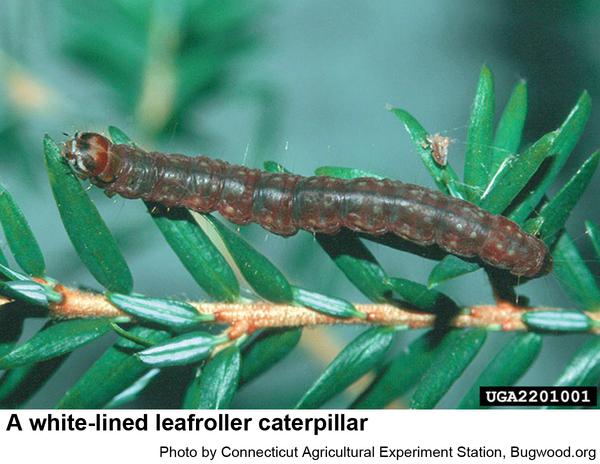 Note the white line across the face of this white-lined leafroller.

Note the white line across the face of this white-lined leafroller.

The white-lined leafroller has a surprisingly large number of host plants including conifer such as fir, larch, pine, and spruce. Other broadleaf plants include alder, apple, birch, elm, holly, huckleberry, poison ivy, poplar, sumac, and other trees and shrubs.

Because of its enormous host plant range, white-lined leafrollers are not likely to be resistant to pesticides. Should they become abundant enough to require suppression, consider using a pyrethroid because pyrethroids are very toxic to caterpillars but are not too hazardous to humans and pets (other than fish - avoid using pyrethoids around pools, ponds, and streams). Pyrethroids labeled for residential landscape use are readily available in most big box stores, plant centers, and nurseries. The active ingredient of pyrethroids ends with "-thrin." The active ingredient of all pesticides are listed on the front label usually in very small font near the bottom. Most pyrethroids have a long residual life in the environment.