Yellowjackets in the Landscape PDIC Factsheets

Yellowjackets are about the size of a honey bee, but are yellow with black markings, more slender, and are less hairy. Like honeybees when their hives are disturbed, yellowjackets swarm out aggresively to sting whatever caused the disruption. The eastern yellowjacket, Vespula maculifrons, is the most abundant yellowjacket in North Carolina. Each year up to 40% of the eastern yellowjacket nests are parasitized by other species of yellowjackets, primarily the southern yellowjacket, Vespula squamosa. Eastern yellowjacket colonies not parasitized may reach a population of about 3,000 workers! Queens and males are produced in late summer and early fall. Males don't sting and they have noticeably longer antennae than females. A healthy colony may produce hundreds of queens each of which has the potential to found a new nest the following spring! Yellowjackets do not reuse their old nests (Apparently they do not even reuse the individual cells for new workers and queens). Only mated queens overwinter in a dry, sheltered spot. To establish a nest, each queen has to forage for food, construct the paper brood cells, lay eggs, feed the first brood of worker grubs, and defend the nest from intruders until the first offspring emerge as adults. The new workers then assume all tasks except egg laying. Nests are subterranean and usually occur under a landscape timber or some other inconspicuous place. Occasionally yellowjackets nest in an open meadow or yard so that the nest entrance is wide open. Yellowjackets line the opening, tunnel, and cavity with a gray carton. The nest proper resembles layers of paper wasp nests stacked three or four deep all of which are surrounded by a carton several layers thick.

The eastern yellowjacket is our most abundant species.

The eastern yellowjacket is our most abundant species. 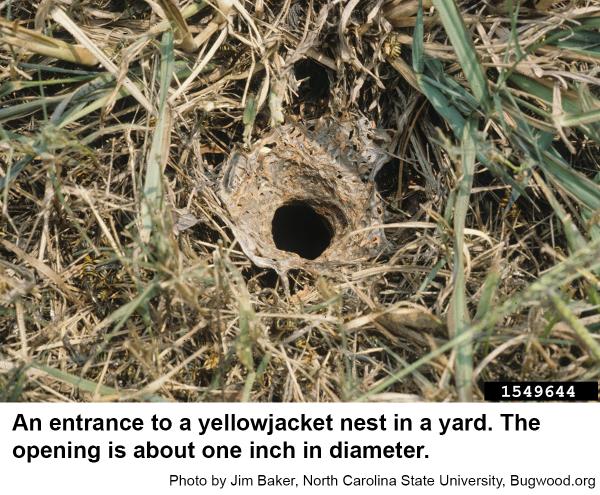 A yellowjacket nest entrance in the middle of a landscape.

A yellowjacket nest entrance in the middle of a landscape. 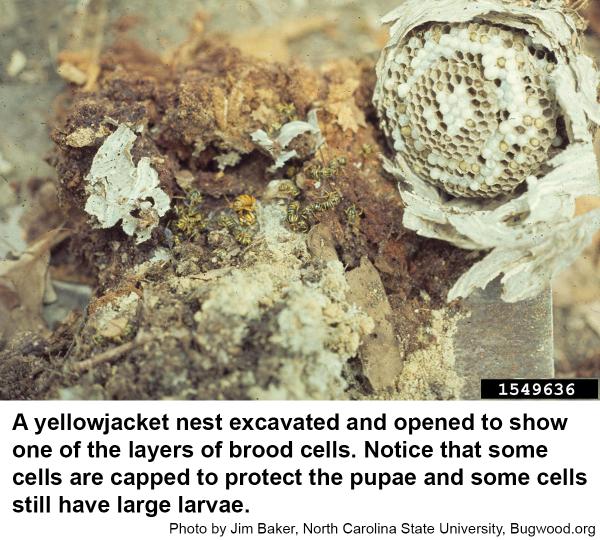 Yellowjackets are attracted to sugar sources such as ripe fruit, nectar, and drink cans. On the benefit side, these wasps kill many insects that attack cultivated and ornamental plants. However, nests near homes may be a hazard. Unfortunately, most folks discover nests by accident when working or mowing nearby. Yellowjackets can sting repeatedly and many workers swarm out of nests aggressively when disturbed. The sting is instantly painful, and the soreness, swelling and itching may persist for days. Some folks are exceedingly allergic to bee and wasp stings. Without prompt medical attention, people hypersensitive to stings may die as a result from a yellowjacket sting.

A very recent yellowjacket sting. The site will redden and swell.

A very recent yellowjacket sting. The site will redden and swell.

Yellowjackets are attracted to sugar sources, such as berries, nectar, and drink cans. They also forage on protien sources such as sandwiches and deviled eggs at picnics. To avoid yellowjackets, harvest fruit as it ripens and dispose of rotten fruits where yellowjackets can not reach them.

If you can find them, it is best to eliminate yellowjacket nests at night when the wasps are inside and are relatively calm. Even then, any disturbance will result in instant activity by the colony so work cautiously but quickly, and wear protective clothing. One slow (overnight) but sure way to control a colony of yellowjackets is to use 5% Sevin dust. Dust the entrance liberally with 5 % Sevin dust (maybe two teaspoons). The next day as the workers go in and out, they pick up the dust and track it into the nest. That nest should die out in a day or two (although new adults may emerge from developing pupae for a few days thereafter). Bee and wasp sprays that shoot out 10 to 15 feet can also be directed into the nest entrance. Do not pour gasoline or other fire accelerant down a nest hole. This is extremely hazardous, environmentally unsound, and it kills plants in the vicinity.

A simple trap using a small piece of raw meat or fish as bait suspended over a pan of soapy water can be quite effective in lowering populations of yellowjackets in local areas. The foraging wasps often "bite off more than they can chew" and drop down as they start to fly away. Once they hit the water, the wasps sink and drown. However, dogs, cats, and other mammals can be attracted to the bait as well so some ingenuity may be required to avoid that unwanted predation. The bait will have to be replaced regularly as yellowjackets are not attracted to rotten meat.

Sometimes, however, it is not possible to find the nest. Aerosols of “flying insect spray” can temporarily protect an area for foraging yellowjackets, These aerosols usually contain various pyrethroids. Try to purchase an aerosol that in addition to the pyrethroid also contains PBO, a synergist that greatly enhances quick knock down.

A southern yellowjacket foraging on a ripe plum.

A southern yellowjacket foraging on a ripe plum.