The Uniform Peanut Performance Tests (UPPT) were established in 1973 through an informal arrangement among cooperating scientists from seven major peanut-producing states (Figure 1). The names and addresses of the UPPT cooperators are listed in this report. In 1995, plant material transfer agreements were accepted by all cooperators in the UPPT, which marked 40 years in 2012.

Each year, a uniform set of advanced breeding lines is selected and tested against the same set of check cultivars. Before acceptance for UPPT evaluation, new entries should be equal to the appropriate check cultivar of a similar market type in several aspects and be superior in one or more characteristics after preliminary yield testing for at least two years. These new entries are usually accepted for a maximum time of three years in the UPPT, unless a prior arrangement has been made with the coordinator. At each participating location, the UPPT cooperator commonly uses the most prevalent cultural practices, but may also include additional entries that are local options. 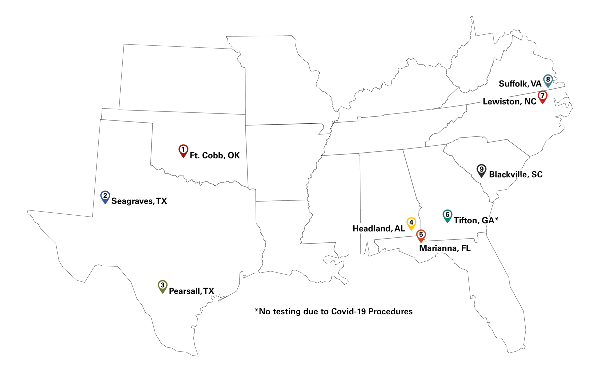 Skip to Materials and Methods

Summary of planting, harvesting, and soil type — UPPT locations in 2020

Summary of soil analysis and mineral amendments — UPPT locations in 2020

Summary of rainfall, irrigation, and pesticides — UPPT locations in 2020

Skip to Results – All Locations

Table 9. Yield, grade, and seed size of peanut breeding lines and cultivars entered into the UPPT, all locations, 2020

An online, interactive visualization tool has been developed that allows users to summarize peanut breeding line information across locations based on data collected in the 2020 Uniform Peanut Performance Tests (UPPT).