Anthracnose is an important disease of strawberry fruit, crowns, leaves, petioles and runners. Three related species of the fungus Colletotrichum, including C. acutatum, C. gloeosporioides, and C. fragariae can be associated with strawberry plants. This factsheet highlights Anthracnose Crown Rot (ACR) caused primarily by C. gloeosporioides and occasionally C. fragariae. (Some classify these within the same species group; others consider them different species). Disease control is difficult when environmental conditions are favorable, and the disease can be especially destructive to California strawberry cultivars when grown on black plastic. The pathogen tends to be associated with the crown rot phase of anthracnose but can also affect other plant parts.

The most diagnostic symptom of ACR is red and white marbling of the crown (Figure SS-1). However, initial symptoms of ACR include plant stunting and flagging of young leaves due to lack of water (Figure SS-2). Initially plants wilt in the heat of the day, which is often over-looked as drought or heat stress. In advanced infection, the entire plant will die (Figure SS-2). Cutting the crown lengthwise reveals white and reddish brown streaks, creating a marbled effect, or a firm rot (Figure SS-1).

In some cases, ACR can cause leaf symptoms that appear as circular black spots on the upper surface of young to middle-aged leaves (Figure SS-3). The pathogen can also be transmitted with tips and cause widespread damage in plug production facilities (Figure SS-3). Plugs will first appear stunted, show signs of wilt starting with the youngest leaf and completely collapse. The small crowns often become marbled or completely brown and infected tips have poor to no root system resulting in widespread collapse when misting frequency decreases (Figure SS-3).

Roots at the site of attachment to the crown tend to remain white and the entire root system tends to remain fibrous. This in contrast to Phytophthora crown rot where the lesion in the crown usually has a consistent dark red to brown discoloration, although it may be marbled, and the roots at the site of attachment are typically black and have a poor fibrous structure. Also, infected tissue associated with ACR such as petioles or the marbled crowns placed in an incubation chamber will sporulate within 24 hours and the acervuli combined with the spore type are diagnostic; occasionally perithecia may be present (Figure SS-4). A key to discern ACR from Phytophthora is provided (Figure SS-5). 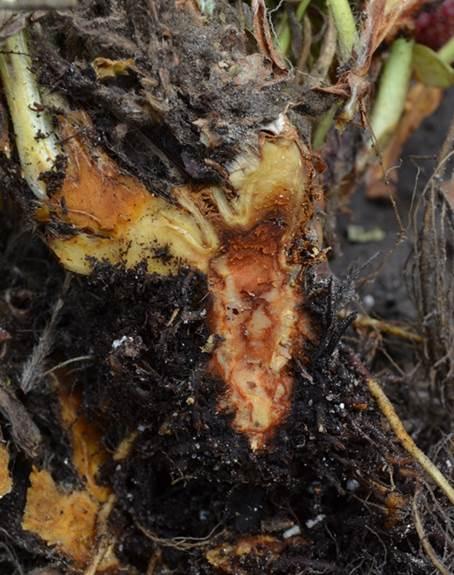 Figure SS-1 Lengthwise cut through a crown with anthracnose crown rot showing the shades of red and white marbling.

Figure SS-1 Lengthwise cut through a crown with anthracnose crown rot showing the shades of red and white marbling. 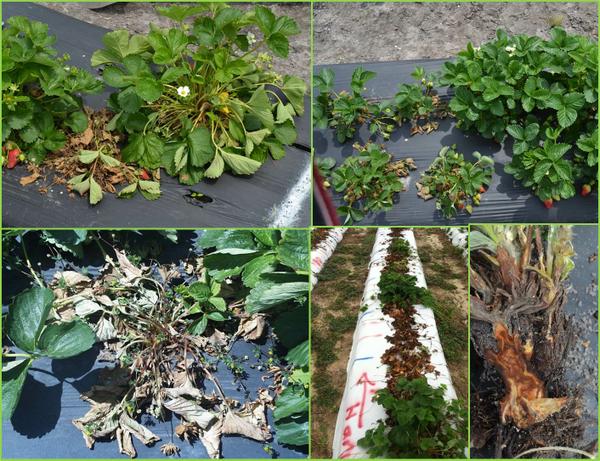 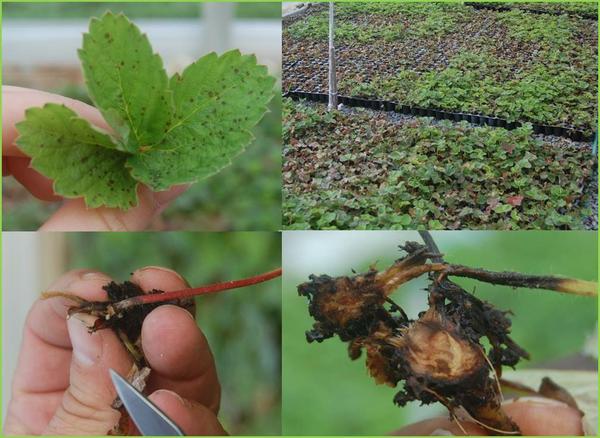 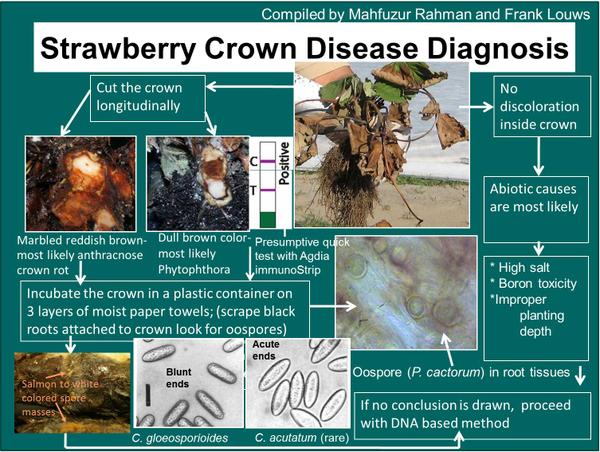 Figure SS-5: A diagnostic key for NC and area to discern if plant wilt is due to ACR, Phytophthora or an abiotic problem. Serology kits are available from suppliers in addition to Agdia; molecular tools may be needed for a 100% diagnosis in some cases.

Figure SS-5: A diagnostic key for NC and area to discern if plant wilt is due to ACR, Phytophthora or an abiotic problem. Serology kits are available from suppliers in addition to Agdia; molecular tools may be needed for a 100% diagnosis in some cases.

Infected strawberry transplants are the primary source of inoculum in fruiting fields. The pathogen may be present on active lesions but in most cases it is in a quiescent phase – i.e. it has infected green tissue but is not causing symptoms. This symptom-less phase of the disease cycle allows the pathogen to build up undetected and then disease expression occurs under favorable climate conditions (e.g. wet and hot) or when there are some type of chemical/physiological changes in the plant. In nurseries (more in the piedmont and eastern production regions; less in the mountains) and sometimes in fruiting fields, the pathogen can originate from non-cultivated plant species, start off in the quiescent phase but rapidly move to the necrotic or symptomatic phase. In North Carolina, important plants include Virginia creeper (Parthenocissus quinquefolia), wild and muscadine grape (Vitis /Muscadinia rotundifolia) and smilax (Smilax rotundifolia). Additional potential non-cultivated hosts identified in Florida include Air potato (Dioscorea bulbifera), Magnolia (Magnolia virginiana L.), Wax myrtle (Myrica cerifera L.), oak (Quercus spp.), Brazilian pusley (Richardia brasiliensi), and Caesar weed (Urena lobata). However, this pathogen species is complex and only about 10 to 67% of the C. gloeosporioides isolates from these non-cultivated plants are pathogenic on strawberry.

Once the disease starts, conidia spores are produced in abundance on petioles, runners, and upper crown tissue and are dispersed through rain-splash, especially wind-driven rain. Movement of machinery and workers through the field also may contribute to inoculum spread. Warm, humid conditions are optimal for this disease, thus cultural practices that encourage aeration and rapid drying of plants should be used. Straw mulches may help to reduce the dispersal of spores in splashing water, but plastic mulches provide a springboard for droplets, thus encouraging the spread of disease. Overhead irrigation can also contribute to disease spread.

Managing anthracnose crown rot in a plug production facility requires a unique approach and is not discussed here. Information is available on request.

Rarely does anthracnose crown rot recur year after year on the same farm, because the disease has been associated with asymptomatic plants imported from transplant supply nurseries. Thus, the use of disease-free plants is the most important management strategy for controlling this disease but nurseries are usually not aware that a problem exists. Although there are rapid detection methods to detect the pathogen, there is no accepted sampling protocol to assure a given plant source is disease free. Resistant plants are not available.

Rotation out of strawberries for 2 or 3 years will help to rid the field of inoculum from infected plant tissues or infested debris in the soil. However, anthracnose crown rot does not commonly reappear a second year in a field unless the disease is re-introduced on contaminated plants. If the disease recurs in multiple years, local plants may harbor the pathogen and these non-cultivated plants should be removed with an emphasis on the species identified above.

Periodic scouting of a field, especially during warm and wet weather, will enable early detection of anthracnose. As soon as disease is discovered, immediately remove and destroy infected and surrounding plants to help reduce inoculum levels. Killing the plants with herbicide will initiate spore production by the pathogen, and if these plants are not removed the problem will be aggravated. In most cases, infected plants die within 30 to 45 days after transplanting with a second occurrence of plant death in the late spring. However, the amount of plant death typically remains limited in fruit production systems, unlike anthracnose fruit rot that can damage a whole crop.

Nitrogen levels should be kept at the required level, since high nitrogen levels in the soil favor fungal development. Keep foliage dry and reduce water splash by use of drip irrigation to help lower conidial dispersal and spread of the pathogen.

Current fungicide recommendations are available in the Strawberry IPM Guide. If bare root plants are infected and an alternative plant source is not available, whole plant dips in the fungicide Switch (Cyprodinil + Fludioxonil) are very helpful, reducing plant death by up to 1⁄3 or more. Rates are provided in the SmallFruits.org IPM guide and plants should be field set after treatment as soon as possible to avoid plant stunting problems. One to two foliar sprays targeted toward the crown in the Fall when hot wet weather is forecasted can reduce disease spread. A similar strategy in the early to mid-spring is helpful. Products, rates and resistant management strategies are outlined in the IPM guide.

Colletotrichum gloeosporioides, and C. fragariae are anamorphic, necrotrophic fungi that cause anthracnose crown rot on strawberry. Both of these species produce similar symptoms on strawberry and are traditionally distinguished by conidial morphology, presence or absence of setae, presence of a teleomorph state, and colony color (Gunnell and Gubler, 1992).

Colletotrichum gloeosporioides (Penz.) Penz. and Sacc. tends to be associated with the crown rot phase of anthracnose but can also cause fruit rot. It has frequently been isolated in nurseries. This species commonly forms perithecia of the teliomorph state, G. cingulata. Conidial masses are pale pink, whitish, or translucent. The conidia produced by C. gloeosporioides are cylindrical, rounded at the base, and measure 14.5 to 17 x 4 to 4.5 µm. Conidia also are aseptate, thin-walled and hyaline. This species produces 1-3 septate setae that measure 70 to 103 x 3.5 to 4.5 µm. On potato dextrose agar (PDA), colonies of C. gloeosporioides have dense, white mycelial growth that turn a dark olive-grey color with age (Gunnell and Gubler, 1992; Smith, 1998).

Colletotrichum fragariae A. N. Brooks is primarily associated with crown rot and is not commonly a problem on fruit. It has not been isolated as a common pathogen in North Carolina since 1986. Lesions form on petioles, runners, and leaves. Conidia (12.5-16.5 x 4.5-5 µm) are cylindrical, straight, and rounded at the apex and taper to a point at the base. They are produced in acervuli or on aerial hyphae. Setae (80-200 x 3-4.5 µm) are usually present and are 3-5 septate and fasciculated. On PDA, colonies are olive, gray or black with dark gray or olive reverse. C. fragariae does not have a teliomorph state (Gunnell and Gubler, 1992; Smith, 1998).

One of the first indications of anthracnose crown rot on strawberry plants is the development of drought symptoms limited to foliage originating from a single crown. Plants with anthracnose crown rot also have nicely developed root systems, in contrast to the rotted and feeble root systems of plants with Phytophthora crown rot or black root rot. A telling symptom of infection by C. fragariae or C. gloeosporioides can be found when the crown is cut open longitudinally; a marbling with distinct red and white areas and their interface is present.

If strawberry crowns are suspected of having anthracnose crown rot but no signs of the pathogen are evident, sporulation can be induced by placing crowns in a moist chamber for 24 to 48 hours.

Traditionally, morphological characteristics such as conidial shape, the presence or absence of setae, and colony color have been used to differentiate Colletotrichum species. These traits, however, are highly variable among isolates and often subject to interpretation. The morphological differences between C. fragariae and C. gloeosporioides are too subtle for reliable differentiation when cultured on PDA. To make measurements and morphological observations of conidia and setae, isolates should be cultured on strawberry leaf agar (SLA) under continuous fluorescent light.

ITS sequence analyses is the most reliable way to identify species of Colletotrichum. The internal transcribed spacer regions, including the 5.8 rDNA, can be amplified using universal primers ITS1 and ITS4 as part of a standard PCR protocol (Garrido et al., 2009).