A number of different aphid species feed on strawberries in North Carolina, including the strawberry aphid (Chaetosiphon fragaefolii), potato aphid (Macrosiphium euphorbae), and green peach aphid (Myzuz persicae). Recent monitoring efforts have also found Chaetosiphon minor and the yellow rose aphid (Rhodobium porosum) to occur on strawberries in some parts of the state.

Most species have complex life cycles where they alternate between generations of parthenogenic ("self-cloning") females that give birth to live young, and generations of winged males and females that reproduce sexually. Immature aphids, called nymphs, can go from birth to adulthood in less than two weeks so populations have the potential to increase rapidly. Fortunately, a wide variety of natural enemies eat aphids, so damaging infestations are very rarely an issue in North Carolina strawberries. 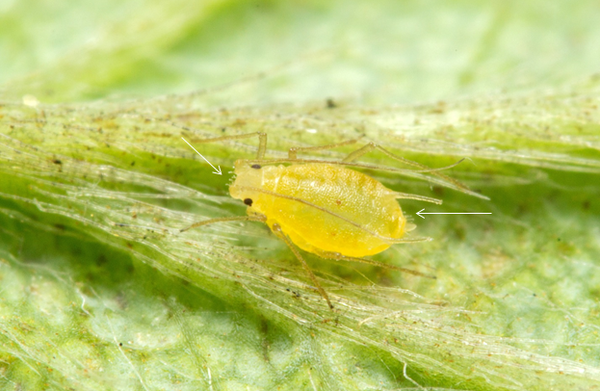 Chaetosiphon minor, one of the aphids found in North Carolina strawberries.

Chaetosiphon minor, one of the aphids found in North Carolina strawberries. 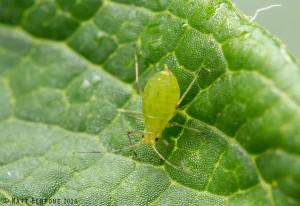 The honeydew that aphids excrete can cause sooty mold growth on fruit that will render it unmarketable, but population densities high enough to cause this type of damage are rare in North Carolina. Many aphids can vector viruses in strawberries. However, virus transmission is usually only problematic in perennial planting or nurseries, not in annual-grown strawberries.

To sample for aphids, collect 40 randomly-selected leaves per acre. Inspect the leaves and count how many are infested with non-parasitized aphids. Visibly parasitized aphids appear brown, swollen, and dry, and have already been killed by a parasitoid wasp that developed inside them. Specific economic thresholds for North Carolina have not been established, but work in California indicates that infestation rates of above 30% are necessary to justify insecticide applications.

Aphids are frequently kept under control by numerous predatory insects including: parasitoid wasps, syrphid fly larvae, lacewing larvae and lady beetles and their larvae. These predators occur naturally around strawberry fields, and purchasing additional predators is not necessary or cost effective.

What to Watch for: Aphids in Strawberries - NC Small Fruit IPM Blog