Skip to Biology and Identification

Adults are 12 to 17mm long, with a very long and slender abdomen extending behind the wing covers. The wing covers of the margined blister beetle are black, with cream coloration framing the margins. In contrast, the striped blister beetle has three orange stripes running down the black wing covers and framing the margins. There are two generations of blister beetle in a year. Adults emerge from overwintering from May to July and the second-generation adults emerge in September. After adults feed for a week, females will lay eggs in the soil. After 10-16 days, larvae will emerge from the eggs to feed on grasshopper eggs before entering the soil to pupate. 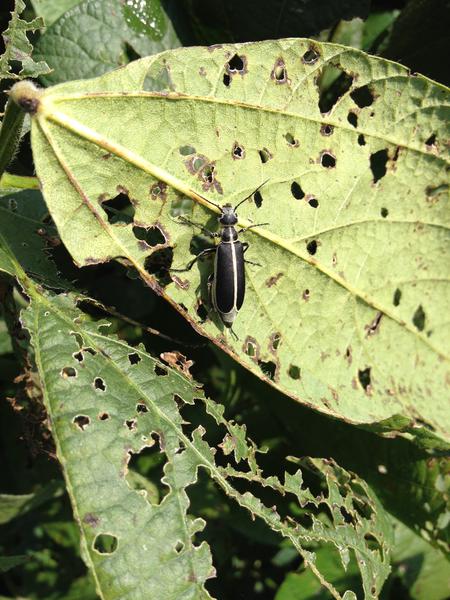 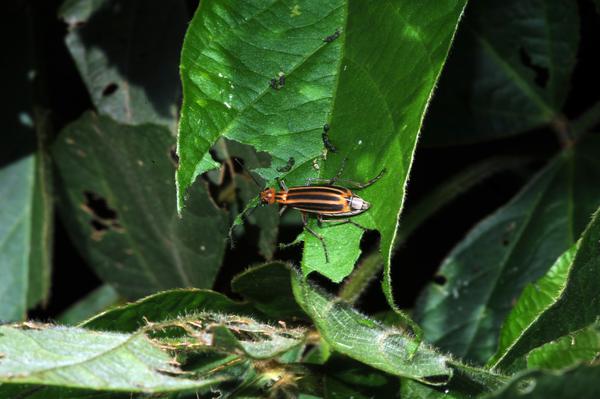 Blister beetles usually damage soybeans through defoliation. These beetles tend to aggregate and often appear at once in large groups and, when they do so, can rapidly defoliate plants. Blister beetles can transmit bean pod mottle virus, although yield-limiting levels of this virus are not common in our state. Some soybean varieties are very resistant to feeding, but there is no current way of identifying which varieties or what characteristics in the varieties lead to this resistant. Blister beetles feed on many cultivated, and uncultivated hosts, including pigweed. Therefore, weed control is important.