Black Root Rot (BRR) is a disease complex on strawberry, meaning that one or more organisms can be involved in the infection, including the fungi Pythium spp., Fusarium spp., Rhizoctonia spp., and several species of nematodes. It is a common disease in North Carolina and the main reason growers fumigate in the southeastern region. In annual systems, the disease builds up over time and typically reaches a peak of damage at peak harvest. However, early damage causes plant stunting that is apparent within 1-2 months after planting. BRR can cause yield reductions up to 20 to 40%.

In matted row systems, BRR is generally more severe in older plantings, especially during dry weather due to poor root systems, especially close to harvest. Infection usually begins in the first fruiting year and worsens the following year. Black root rot is enhanced by stresses like poor soil drainage, cold, drought, flooding, soil compaction and repeated freezing of roots. The disease typically occurs in areas with matted row production and limited rotation. Diagnosis of black root rot is difficult because of the many different organisms that may be involved. On some farms, the disease may be predominately caused by Pythium spp., whereas on other farms, Rhizoctonia spp. may dominate the complex. Multiple other fungi may be associated with the problem. In many cases, the Pratylenchus (root lesion) nematode is associated with BRR but this has not been a consistent observation in North Carolina and surrounding states.

Above ground symptoms include lack of vigor and plant stunting. In some cases, plants may collapse but this is rare except in highly susceptible varieties (e.g. ‘Benito’). Plants may be stunted with small fruit, few runners, and numerous dead older leaves. Infected plants do not respond to fertilization or improved growing conditions, and yields may be reduced.

In a normal, healthy strawberry plant, new main roots are pliable, whitish, and highly fibrous with many secondary and tertiary rootlets (Figure SS-1). With age the primary roots become woody and dark brown or black. A yellowish-white core is revealed when the dark tissue is scraped away. As long as the root system is active, the feeder roots should remain white.

In plants with black root rot, feeder and main roots may deteriorate and become covered with black lesions. The entire root system may be smaller, and the feeder roots may be lacking entirely, giving the main roots a “rat-tail” appearance (Figure SS-1). Roots may eventually turn black, rotting from the outside in. The central root core may be blackened in woody roots, and but will remain white in fleshy roots, distinguishing this disease from red stele, in which the core is red. Crowns may discolor slightly with a dull gray appearance but this is not common. 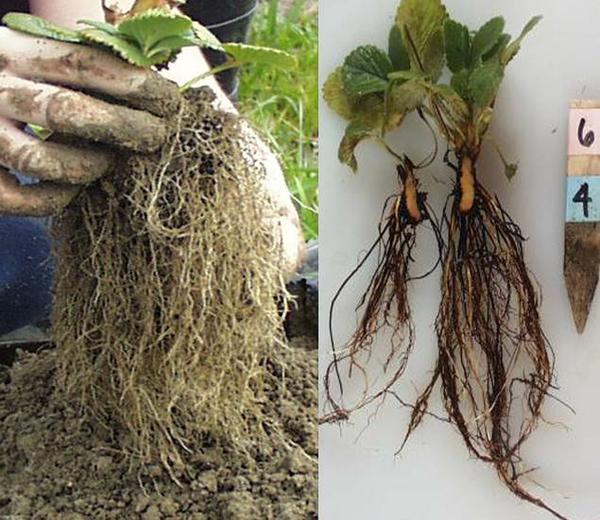 Figure SS-1: Healthy root system (left) with many white roots and a healthy network of fibrous roots. Roots affected by Black root rot (right) have a poor fibrous root structure, are black or have many brown lesions, and take on a "rat-tail" appearance.

Figure SS-1: Healthy root system (left) with many white roots and a healthy network of fibrous roots. Roots affected by Black root rot (right) have a poor fibrous root structure, are black or have many brown lesions, and take on a "rat-tail" appearance.

Pythium spp. -- P. irregulare is the most prevalent species of Pythium causing black root rot, based on studies in North Carolina and surrounding states. It favors cool wet conditions (temperatures below 20°C).

Rhizoctonia fragariae Husain & W. E. McKeen kills feeder rootlets and structural roots. Lesions are reddish brown at first but become dark brown as they age. Feeder roots will appear water-soaked and can disintegrate. Stained feeder rootlets reveal masses of moniliform cells of R. fragariae. Plants become stunted and yield reduced. In culture, the fungus ranges from white to dark brown and can be slow or fast growing. Hyphal branching pattern, dolipore septa, and moniliform resting cells are all characteristic of R. fragariae. Hyphae are binucleate. Hyphae directly penetrate the root and are usually limited to the cortex. The fungus can be transmitted into the field on infected root stock. The main Rhizoctonia groups in annual production systems are AGA, AGG and AGI.

Pratylenchus spp. Pratylenchus penetrans (root-lesion nematode) is a migratory endoparasitic nematode that causes damage to roots by feeding and migrating between parenchyma cells. Individual lesions develop on roots and under heavy infestation, the entire root system can become necrotic. Plants will appear stunted. Feeding sites predispose the plant to other fungi, and viruses can be transmitted by the nematode. There are some cultivars that contain some level of resistance Pratylenchus.

Depending on the pathogen involved, the disease may be associated with certain soil types (e.g. sandy soils where nematodes and Pythium spp. are more common or clayey soil where Rhizoctonia spp. may predominate).

Choose a site with adequate aeration and drainage; rotate out of strawberries at least every 3 years into crops that are NOT hosts of Rhizoctonia spp., including crucifers and legumes. Sweet corn, sudangrass, and pumpkins are good choices.

Considerable research and practical implementation has been done in non-fumigant based management systems and in organic production systems. The most promising systems combine crop rotation with a cover-crop plus compost (CC+C) system or a method called Anaerobic Soil Disinfestation (ASD). The CC+C and ASD systems require considerable management but are consistent with organic and soil-health objectives. Detailed information is available for growers who wish to pursue these farming systems.

2. Use Disease-Free Plants and Host Resistance

These pathogens can be imported with transplants from both plug and bare root production systems. However, in our experience, the local soil population and soil management choices has more impact on the amount of BRR than plant source effects. Some tolerant cultivars exist but there are no resistant ones, since cultivars resistant to one pathogenic species are rarely resistant to others involved in the complex.

Minimize stresses that exacerbate the problem. Maintain moisture and avoid temperature stress by mulching and using adequate irrigation. Use caution when applying herbicides, since injury due to over application may lead to greater black root rot susceptibility. Maintain organic matter and avoid compaction of the soil.

Fumigating the field prior to planting is highly effective. Fields with a history of strawberry production can experience a reduction in yield of 20-40% in the absence of fumigation and without other mitigation practices. Unlike other regions of the world, BRR is the most important issue in North Carolina and surrounding states. For more information on timing and use rates, see our strawberry IPM guide at for current recommendations.