Black thread scale, Ischnaspis longirostris, is one of the armored scale insects that secrete a test (the "armor") inside of which these insects grow and reproduce. The test protects armored scales from many parasites and predators as well as weather. The test also protects armored scales from some pesticides. Black thread scales secrete a black, slender, elongate armor up to 3/16 inch long as they develop. Their armor is whitish and papery underneath the scales. Females lay 20 to 30 eggs under their armor that soon hatch. Tiny crawlers emerge from under the armor and crawl about and within 24 hours settle down to insert their thread-like mouthparts to feed on fronds, petioles, and fruit. Black thread scales tend to develop parallel to leaf veins. Once settled down, female insects do not change locations again. Development takes about a month. 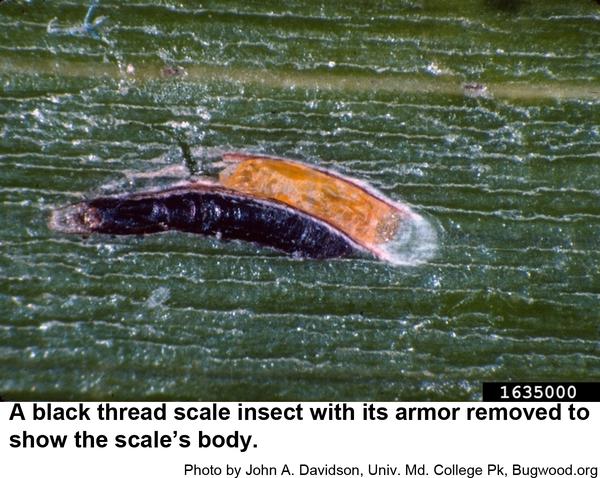 Once the top of the armor is removed, the body of the black thread scale is exposed as well as the whitish lower layer of the test.

Once the top of the armor is removed, the body of the black thread scale is exposed as well as the whitish lower layer of the test.

Black thread scale infests palms and Swiss cheese plants in Florida where it is occasionally a very serious pest on greenhouse floriculture crops as well as tropical fruit trees outdoors. It has been collected from at least 50 plant families and 130 genera. 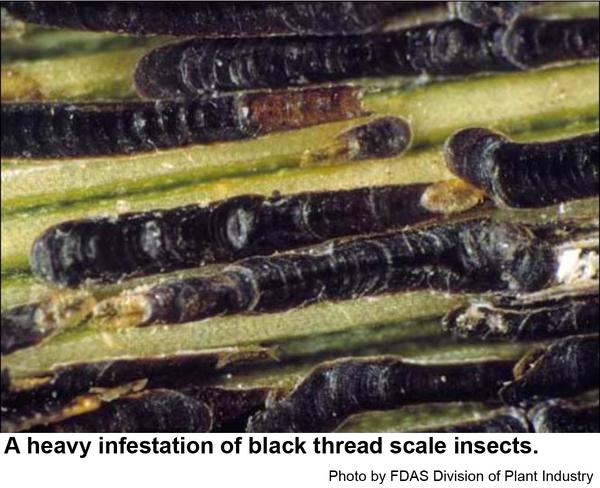 This black thread scale infestation has gotten out of hand -- it's time to spray!

This black thread scale infestation has gotten out of hand -- it's time to spray!

Scale insects have predators, parasites, and diseases that help suppress scale populations, particularly in the long term. Ladybird beetles are somewhat effective in controlling the black thread scale. Other reported natural enemies include tiny parasitic wasps. If the population gets too numerous, armored scales are susceptible to horticultural oils. These oils pose little threat to the environment or people and animals when they are diluted properly for sprayed according to directions found on their labels. Probably 18 different brands of horticultural oils are on the market. Although they are essentially the same chemical, rates for application on the labels vary significantly. During the growing season, it would be well to use not more than the 2% rate to prevent damage to the plants (5 tablespoons of oil per gallon of water). Plants should be well irrigated before treating them to prevent pesticide injury.